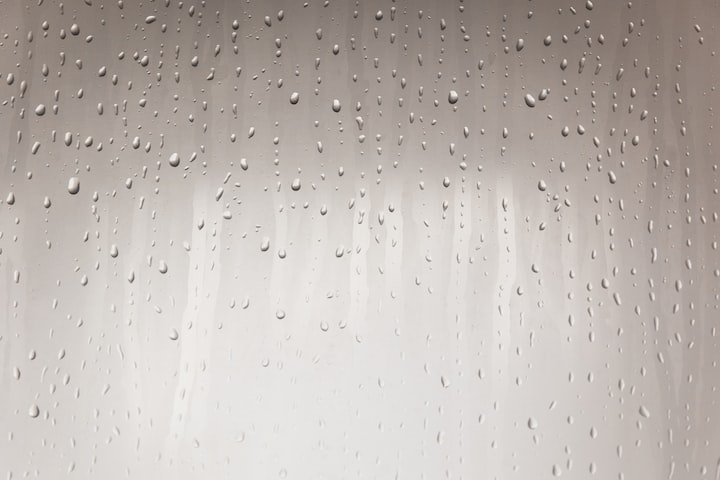 We hadn’t known each other long, but there was a sweetness about our affection for one another that was intoxicating. A desire to touch gently. To kiss softly. To be close.

We had been laughing and joking, running around the house like children. I grabbed his hand and led him up the stairs to the dressing room. He sat down in one of the lush barrel chairs, smiling at me, catching his breath. I regarded him for a moment, made a decision, and then proceeded to strip off my clothes. He watched me attentively, eyes sparkling with a mix of surprise, joy and uncertainty.

I went around the corner and turned on the water for the shower. The space was huge, more the size of a walk-in closet than a shower. It was open, with no door, and the water came down from the ceiling like rain, without a specific shower head. It was fantastic.

I walked into the misty cascade, the water slowly soaking my hair and covering my skin, beginning to pool at my feet. After a moment, he came around the corner, still dressed. I turned to him and stood still, letting him look at me and make his own decision.

He took off his clothes and hung them on the hooks on the wall. Then, he joined me under the water.

The air between us was still. Calm. But inside of me, there was a churning. His growing erection and his eyes told me that he must be feeling the same way, and that we were both committed to the outcome of this sweet game.

In the rainy wet of the shower, he came to me and took me gently at the waist, bending down to kiss me. Our mouths, wet and warm, came together beautifully. Our lips pressed together, then opened as our tongues began their gentle explorations.

We were not embracing. Our mouths were touching. His hands rested on my waist. Mine were on his arms. The only other contact between us was the push of his erection against my stomach. The lack of contact was maddening, totally hot. All of a sudden, my body was on fire. I did not want to go through any preamble or foreplay. I wanted to feel this man inside me and I told him so.

He paused, looking at me for a moment, searching my face and my eyes, questioning what he had heard. I met his gaze straight on and nodded. When it registered that I was, indeed, serious, he obliged. Taking my face in his hands, he kissed me deep and hard, becoming lust. I wrapped my arms around his shoulders and pulled my body flush against his. Without breaking the kiss, he lifted me, wrapped my legs around his waist, walked us across the space and sat me on the built-in shelf at the side of the shower. It was the perfect height.

I pulled back from the kiss, catching my breath as he positioned himself. “Don’t thrust. Just be inside me. Fill me up and stay there. Let me feel you inside me. Let yourself feel me around you.”

With a lift of his eyebrow, he took a deep breath, but did as I asked. Holding on to my hips and watching my face carefully, he pushed inside of me with one long, slow, controlled movement, until his full length was sheathed within my body.

It was exquisite. We had never shared more than a kiss and a chaste caress before and now, here we were, naked, soaked, and bodily connected. Intimate lovers.

My hands were on his arms and my legs were wrapped tightly around him. The urge to move was almost overpowering. I could see it in him and he could see it in me. Our eyes were locked together, both of us breathing heavily. “Just stay still. Just a moment longer.” He nodded.

Then it began. As we looked at one another, the expression on his face shifted to one of pure carnal pleasure and he sucked in his breath. He closed his eyes for a long moment and I could see the muscles in his torso contract as he began to moan. Opening his eyes again, his hands tightened on my hips. He was pushing himself as hard against me as possible as he stiffened and fought to remain still. Watching the climax overtake his body, my body reacted and I felt my own orgasm build. I locked my eyes on his, reveling in this turn of events as my breath shortened and my nerves lit up. Then, I felt him begin to pulse and, as he came into me, I exploded around him, my deep muscles squeezing and massaging. My own cries joined his as we both came hard. I arched backwards in my ecstasy, barely containing my own urge to move as waves of pleasure rolled over me.

Then, his arms were around me, pulling my body to his. His mouth was on mine, his tongue thrusting in the way his cock had not. The kiss was beautiful, passionate and full of the sweetness, gratitude and relief of new physical love.

As our mouths parted, the smile on his face was pure joy. My own smile met his and I began to giggle. He lifted me up, disconnecting from me with a moan. Then, with eyes still hungry and a body still stiffly awake, he lay me down on the wet floor under the warm, raining, water and began to explore the body he had just experienced.