by Anchored Gypsy 14 days ago in relationships 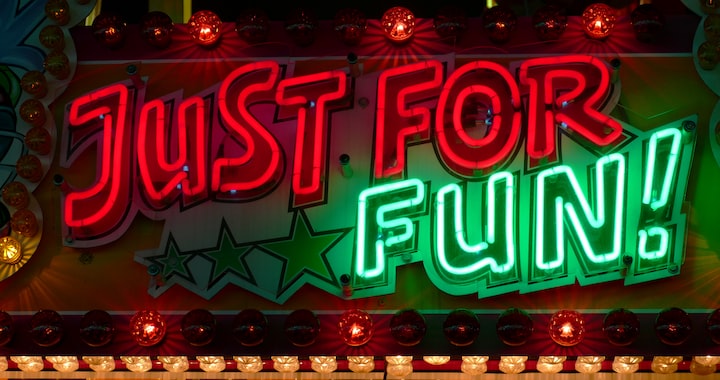 Photo by Call Me Fred on Unsplash

I think it's safe to say that what you are about to read is complete and utter bullshit...

I got bored with Tinder, so I deleted it. About a week later, I got bored again and reinstalled it.

Anyway. So I was swipe, swipe, swiping. Right, right, left, left, LEFT, gross, left, right...OH, HEY! RIGHT! This one guy, I do remember. He was good looking. Not from around here. His profile said "world traveler" (but then again, so many others do as well). I honestly expected nothing more than a few DM exchanges that would end somewhere around "you make my cock hard". K, bye!

Friday night, I was enjoying a nice hot bath when my phone started going off. Tinder was blowing up with notifications. And I'm really not one who has enough patience to sit and sort through the many repetitive messages from men who I know are only looking for one thing. Most of which probably wouldn't even be good at it if given the chance.

One did catch my eye. I don't even know if it was his pictures so much as it was his way of making me laugh. He made some sarcastic comment about my photo, which didn't show my face or anything about me other than my hair. Yes, he was VERY good looking. But it takes a special kind of man to make me detour around his looks and laugh on the inside the way that this guy did. I'm a HUGE smart ass. I'm very sarcastic. I'm not easily offended. I LOVE to laugh. And I love someone who can make me laugh. Someone who isn't intimidated by me or my sense of humor. Seriously though, I can't say this in plain enough English: this guy was just different in his approach to me. He got me. The way he spoke to me. The way he handled me, just over DM. The way I was giggling at myself for coming back at him and then he would in turn say something about it. I was instantly turned on by this guy.

So yeah, we chatted. I laughed. A lot. There was an equal amount of giving one another a hard time. When I asked what he does for a living, he said he was a federal agent.

*Right. Because what the fuck is a Fed doing on Tinder?! That's not even legal!

**Well, we aren't supposed to. But I'm pretty discreet. I don't get out enough to meet people and I'm fairly new to the area.

*And what sort of Fed are you?

So the next thing I remember him saying is "What is this, 20 questions?"

Yes! Yes, that's exactly what this is. You're on fucking Tinder of all places, claiming to be a fucking FBI agent. You're good looking. Funny. Smart. A world traveler. A great (and obviously fake) career. And you have to resort to Tinder to find a woman? Shesti!

This man is claiming to be chordane, and he's on a dating app?! Not just a dating app, but Tinder...the one for hook-ups. The one where men go to find a piece of ass and women go thinking they'll find their future husband only to end up washed up and spit out. I mean, come on! What (and I cannot stress this enough) the actual fuck! No chachimos?

I asked where his wife was, since one of his profile photos showed him wearing a wedding band. Obviously a man wouldn't put that out there if he wanted women to know he was available. He said "We are going through a divorce, and she's actually the one who started using a dating app before we separated."

Don't think for one minute that I wasn't enjoying this! I continued questioning and interrogating him myself. He eventually asked if we could exchange numbers so that we could chat a little more freely.

*Are you going to use your real phone number, or a number from an anonymous texting app so you can spoof me?

**Well, no, it's my Google Voice number.

*Ok. Wow. That's not at all suspicious in any way... Why the fuck are you on Tinder if you can't even use your real contact information?

Then I got some spiel about how the Russians use cell phone numbers to track us, and the foreign hackers can access our bank accounts through our phone numbers and all kinds of other bullshit that I honestly was beyond caring about at this point. I was truthfully just entertained by the khul that was pouring out of this guy's mouth. But I wasn't yet done. I sent him a text to the number that he gave me. We exchanged texts for a few minutes. Then he called me. He said it was much easier to talk on the phone than to text.

He was out at a bar, watching a game and having some drinks. He then went on to another bar nearby while we were talking. Which tells me that he doesn't really have that big of a problem getting out and meeting people like he said. He's a social person who frequently visits popular establishments. We talked about his job. My job (a little). I interrogated him about his marriage. He claimed something about his estranged wife and kid being back in their home state, and he had tried to make it work for a long time because she got hit by a car...they were already separated, and she was struck by a vehicle while she was crossing the road. He did the "admirable" thing and stayed together to keep her on his insurance because she wasn't able to work due to the accident and the amount of therapy she was going through." His way of sharing it was almost enough to make you feel sorry for him, but more like truly admire him instead for being such a trooper and an upstanding guy. He's good...really smooth, but not in a way that's obviously fake. More like, in a way that you'd kinda forget that he just said something that contradicted something that he had just said before. If that makes sense.

He told me about all of the places that his job has sent him to all over the world. He asked me if I would like to travel with him: he'd love to find someone to be able to take on trips and enjoy the sights. He wanted to know the top three places I love traveling to.

Sweetie, I've barely left the state aside from a few field trips in high school, and a few minor trips as an adult that I would love to forget. I've not done what anyone would consider "traveling". But that's how these men try to lure you in. They sell you this idea of the things that they think you want to hear. I don't need a knight in shining armor. I can fight my own battles, save myself, and do all of that other cool shit. I just need someone to sharpen my sword on occasion.

He asked more than once if I would come out and meet him. And I wouldn't...I told him I was already up past my bedtime. I did enjoy talking to him on the phone. Maybe it was the fact that I'm bored and lonely. And probably also the fact that he's from Pennsylvania and I love a man with a northern accent. Plus, I've always had a deep love for PA! Whatever the case, it was fun chatting with him. He asked me if we could meet up Sunday. He said he was going to a university football game on Saturday. This morning (Monday) he was supposed to be flying out for a few days for a work obligation. So he really wanted to meet up with me on Sunday in between these things. I agreed, because I just couldn't say no to meeting this Fake FBI guy who had all of this amazing shit going for him but turned to the one place that he had just told me his job taught him was one of the most dangerous of all: the Internet!

And did we meet up yesterday?

No! He was supposed to contact me Saturday at some point. He didn't. I sent him a brief text Sunday to see how he would respond, and he claimed that he had no service and that he had also gotten in late Saturday and fell asleep. I personally enjoy all of the bullshit excuses. Because we all know that if a man were truly interested in a woman, he would have made sure to set those plans before she set her own plans with someone else.