by Slim_Gem16 3 months ago in lgbtq 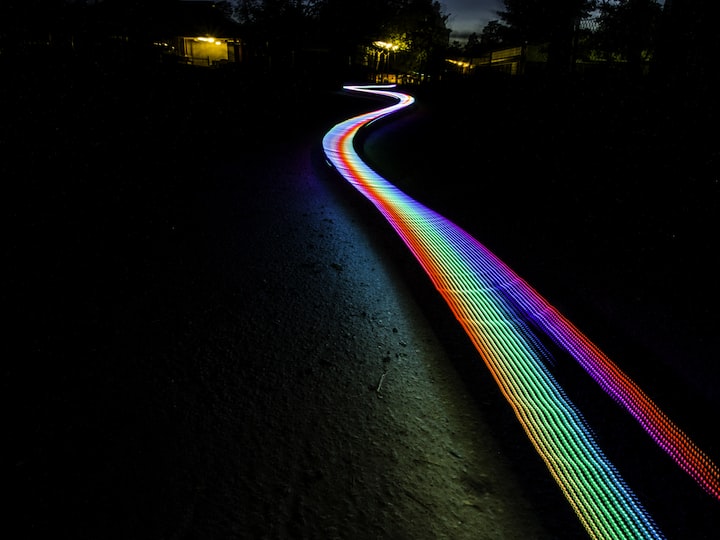 Photo by Tobias Carlsson on Unsplash

It took 20 years for me to come into being with women. The first female I dated dated was in her mid 40s. Her name was Tara. The crazy thing is I knew her for years before anything happened. We lived together and all. We were like best friends and I never had it in my mind that she and I would ever even be together......And all for good reason. I already knew Tara was a force to be reckoned with. We hung out over the years. Drank. Smoke. She did her thing and that was it, but she was intense. Whole live sexual ass Scorpio.

It started one night we said bump it and decided to go out to a club. A hole in the wall, if you will. We were getting drinks back to back, dancing, vibing and having a good time. My mind was somewhere else in the clouds when she shocked the hell out of me and starting dancing on me. Grinding on me super hard and it felt quite nice. STILL.....I didn't think anything of it. As I said before, Tara was intense. She had done this before so I was like whatever. This went on for a while. Out of the blue, I hear her whisper in my ear...."Im getting that pussy tonight." And she commenced to putting her hands down the front of my pants and rub her bodacious titties on me. It felt amazing and I couldn't believe what was happening. I let it happen.

We made it back to my hotel room. Still feeling good, we cut on some music and kept the party going. I rolled up a few of them thangs lmao. Tara did her thing and livened up the place with her dancing and shit talking. Tara's energy was amazing when she acted right lol. I happened to have some ecstasy that night. She never asked for any before, but she surprised me again. I warned her what the hell could happen. STRANGE MF THINGS CAN HAPPEN LMFAO. Of course she didn't listen and of course I gave Tara what she wanted......and that was where I fucked up.....or better yet, that's where she fucked up.

I was already lit with ecstasy. She was off the meatrack and I loved every second of it. I had NEVER seen her behave like this. Tara was a whole different person. Tara and I felt okay, then we were good, then we were great and then we began to feel amazing. I kind of know why (THE DRUGS!!!! LMAO), but I started to rub her back anyway. That e made Tara's skin the softest it had ever been. Touching her felt like electricity jolting through the body. I gave the both of us chills. I smelled her neck and she still smelled awesome as usual so I starting kissing and tasting. I felt her melting like butter in my hands and I loved every minute of it. I could NOT believe what was happening. Over and over in my head I was like "What is happening? Will I know what to do when it's time to do it? Will I do it right?" That ecstasy helped me to quickly answer my own damn self lol. I lost all cares in the world and Tara let me have her.

She also had a HUGE secret I would have never guessed about her. Tara was a squirter. That shit blew my mind. Yeah I saw it before a couple times watching porn, but it is a whole different beast in person. I almost drowned a few times but it was mesmerizing. I couldn't stop eating her. She tasted soooo good and she kept wetting the bed. I hadn't been that proud of myself in a very long time. Things finally came to a halt for a brief moment. Mf got hot lmao and stopped to have a smoke and drink break. There was silence with hella looks of shock with a small hint of euphoria still lingering. Neither I nor Tara could believe wtf just happened. She kept giving me that look like this mf here been holding back...hiding her true talents and deepest secrets from me. I blushed so hard. She just kept staring at me in disbelief. I stared right back admiring her gorgeous naked body. It was so beautiful to me. We sat on separate beds. Chillin out, relaxin, takin a breath. It was fuckin hot in that room. And I felt like I was gonna die of thirst lol. Tara laid across her bed and I lay across mine. I tried hard to focus on the TV and the music. Did not work. I snuck my way across to Tara's bed and positioned myself on her backside and I hadn't been so active in a hot minute. Let alone with a woman....but I digress!!!!

Back to my point tho. Got severely off-topic. The fact of the matter is I have had more than one instance where I would know whether or not I was into women. You'd think I would know after all that, right? NOPE. Still wasn't sure. I was honestly more confused now than ever. But things were getting more clear as the weeks went by. The sad thing is...I had created a whole Monster out of Tara. Me showing her that side of me, vice versa and adding drugs to the equation?!!! Was not the good thing to do in the long run. I had to learn that sex means giving a piece of yourself to them and them giving a piece of themselves to you. That speaks volumes spiritually. I learned the hard way.

Tara wanted sex and e all the time after that. Everything was about hurrying up whatever business we had to handle so we could get back to have sex. It got to be too much because Tara changed. She was no longer that vibrant, funny, beautiful female I used to know (despite her bullshit). She literally was a monster. If she didnt have what she wanted when she wanted it (drugs, sex, etc.) she was overbearing, mean, disrespectful and emotionally unstable. I hated to but I had to let her go. Glad I did because she stayed off the meat racks. Got caught up in scams and stealing money. I got the fuck on and lost contact. I felt awful for a while after that. It was my fault but I warned her. I think about the old her here and there. Nothing more. I never wish to go back down such a road but I will never forget that night.

Almost a year later, I met someone else. Another woman. Stay tuned.

lgbtq
Slim_Gem16
Read next: A Night at the Theatre
Slim_Gem16

Gemini Sun and Mercury with hella stories to tell. I hope I can make you laugh and give you insight and information. Love and light to all. ❤️🧡💛💚💙💜