by Pete Symes 10 months ago in relationships
Report Story 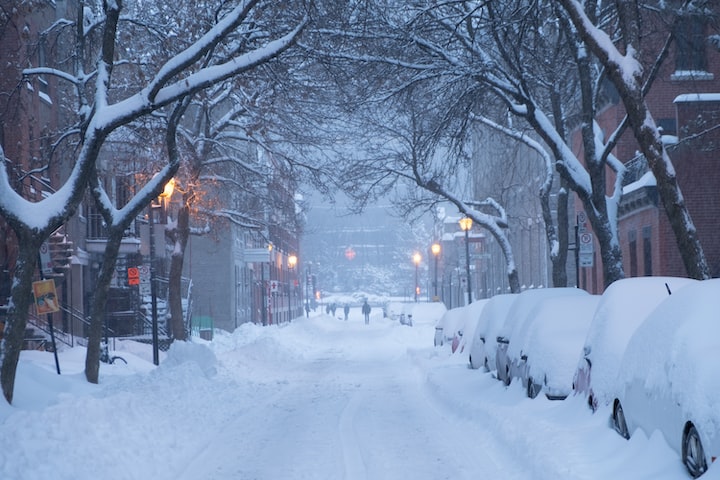 Photo by Shawn Dearn on Unsplash

It was Christmas night. I had just driven back from a gathering with my family through a building snowstorm. Glad to be inside and warm, even if the rest of the holiday would be spent alone in my apartment. It was a nice place in a high rise. Downtown Chicago with a western exposure. Tonight, with the storm in play the city lights had given way to a white gossamer shimmer through the floor to ceiling wall of windows. I enjoyed the warmth and the restful feeling of having dispatched commitments while dodging the glowering phantom of familial past grievances this holiday.

I surrendered to reverie. The end of my long-term relationship almost two years ago. Plunging myself into my career left me no time for another relationship. Or so I told myself. Two years out after eleven years in. A high school sweetheart commitment left me still curious about the smorgasbord of feminine charms afoot to be sampled. One-night stands were all the emotional cul-de-sac I now resided in would allow.

The phone ringing snapped me to the present. I responded as programmed and went to the phone. I ended the plaintiff ringing by answering it without a clue as to who would be on the other end. The voice was feminine and vaguely familiar. Her apology about sneaking out while I slept left me no doubt as to who was on the other end of the line. After all I was the accomplished sneaker, not accustomed to the role of sneakee. Her invite to come to her place tonight caught me by surprise. Her address gave me further pause, as well as a plausible excuse. I saw the snow was heavy enough to resemble cotton outside my twenty fifth floor window. By now the streets and ground would be gathering a ton-o-snow. Snow Plows would be a scarce commodity on this Christmas night. Many of the drivers would not to answer the phone, triple time holiday bonus-pay notwithstanding. As I did my calculations the vision of a five foot six, brown eyed Italian beauty with black hair in a slightly shaggy pixie cut floated before me. That was enough to start the scales tipping. Then the memory of epic cleavage caused all the cards to flip over for me. Up until then the woman in my life had been modestly endowed and even my dalliances were ample, but not busty. The possibilities fueled my agreement and hastened my bursting onto the road into the storm.

We had met at an industry holiday function a week before. We had spoken many times over the phone to go over duplication orders and deadlines for delivery. This was our first face to face encounter and as many holiday party encounters go when fueled with holiday hooch; this one went off like a rocket. We both over served ourselves so details of the evening went from fuzzy, to blurry, to almost blank. We ended up at my place, and managed a rather boisterous romp with both of us keeping most of our clothes on even while we thrashed on my bed. I know this because when I awoke alone, I was still pretty well still suited up though rather disheveled, decidedly unzipped and unbuttoned; thoroughly moist and fragrant where apropos. Her taste lingering on my lips, now parted in a smile, at the few shreds of sweet embrace and rollicking motions in the dark memories left to me. A pair of pantyhose replete with shredded crotch were tangible evidence of our haste to consummate. A sense of satisfaction consumed me before the oncoming oppressive hangover washed over me.

Now as I drove, I recalled our conversation leading up to our eventual festive debauch. My long-term relationship timeline mirrored her previous commitment chronology. Though she had married, she was now widowed at a young age due to a tragic accident to her window washer husband. He was one of those intrepid souls who braves the heights and winds so those of us inside have clean windows to peer out of. I know after condolences I did not deep dive for details and Jennie was not anxious to re-live such a tragic end to her hopes and dreams.

We also had gone over holiday traditions and established that now on our own; Christmas nights were barren of others after family time was served. I do not recall making plans to meet on this night but surely that prospect could have been raised as much had been raised that raucous evening. From dresses to erections many things had been broached and plumbed. Now was time to see what with a clear head and socially acceptable inhibitions might transpire between the two of us this evening. But the prospect of her company on this night did give me a bit of warm fuzziness, no matter the outcome.

The drive taking me up the Kennedy to Old Irving Park Road was slow and steady. Longer than usual, but still without incident. After the obligatory snowfall parking search and pulling in with abandon to a spot that may be problematic further on into this stormy evening. Barely legally parked I trudged down the street to her apartment.

Jennie opened the door greeting me wearing comfy sweater and sensible slacks from her day with the family. She began to brush the snow off of me in a familiar and comforting way. Embarrassed, I realized I did not come bearing gifts and sincerely hoped she had not either. But saw no need to broach that subject now. She took my coat and greeted me with an affectionate holiday hug and kiss which I reciprocated fondly and began soaking in the warmth of her home.

Unlike my rather Spartan and spare place, Jennie had a home here. An honest to goodness Christmas tree, a practice I have eschewed as a bachelor, twinkled brightly in one corner. Scented candles filled the air with a pleasant glow and scent.

Now installed on her sofa with a warm cup of tea in my hands we shared our holiday travels and travails of family, talked of gifts given and received, arguments avoided, feasts and rituals observed.

Jennie said the only thing lacking was her viewing of National Lampoon’s Christmas Vacation and asked if I wouldn’t mind watching it tonight. I had yet to see it so I agreed gratefully. As the movie played, we laughed and laughed and slowly snuggled into each other as the Griswold’s played out their own holiday follies. I felt at ease and comforted in Jennie’s presence.

Jennie pressed her body against mine and again I noticed just how different her body was from a more familiar woman. When she laughed at the movie, I could feel the mirth ripple through her being. It was a funny movie and lost myself in it along with the feel of this full vibrant woman pressing against me. Her hands would press against my chest at times. Rest on my knees at others. I would enjoy the feel of my arm draped over her shoulder. As we laughed my hand would brush against a magnificent breast. Not in a groping way but in a way of notice and tentative curiosity. Sometime I would rest my hand on the curve of her hip or side of her thigh as she shifted position and rested her head on my lap. But mostly we laughed at the movie. Jennie laughed so much to the point I wondered if she was perhaps crying. I understood that this holiday movie ritual was one she had probably shared with her dear departed husband and I felt the privilege of her sharing this moment with me.

When the movie ended my thoughts went to a similar ritual of my own, only our movie had been, “It’s A Wonderful Life” A portrayal of different America, in a different time, with different views, and different priorities. Jennie and I had a conversation on this and we shared a glass of wine and basked in each other's glow as we held each other, warm inside, safe from the storm under a blanket on Jennie’s couch. In Jennie’s apartment. On Christmas night.

“I want to share my bed with you tonight.” Cutting to the chase as only a confident woman could. “But no sneaking out before morning like I did to you.” Jennie said in a slightly wavering whisper. “I was really drunk. You were too. It is all unclear but I remember long forgotten passions you kindled in me in spite of my inebriation. I certainly remember the passion I felt in you that night.” She looked up at me with shimmering eyes and confessed “A craving I had never felt before. A hunger…. So?” With that I felt her hand run up my thigh. I felt a slight quiver run through my Christmas Jennie as her hand found my stiffened cock under the fabric of my trousers. My body responded to her query. She received my answer with a tighter more fulsome embrace. My response to an adult woman’s inquiry was that of an adult man’s. This will be a new chapter.

Our kiss was more nuanced, teasing, inviting, full of promises; rather than demands of immediate gratification our previous encounter entailed. Jennie unfolded out of my embracing arms and rose to her full five-foot six elevation. She smoothed her slacks over her well-muscled thighs. Pulled down the hem of her fluffy Christmas sweater. Crossed her hands, smiled sweetly and said, “Ready to receive your presents for being such a good boy Pierre?” As she lifted her sweater previewing her taut tummy while rising towards objects of my desire, I think my mouth actually began to water just a bit. Unseen by me her sultry smile grew. She had my eyes just where she wanted them.

Jennie stopped. Let her sweater hem fall. Her hands reached out for mine. As she pulled me to my feet she said, “Better for you to come to my bed and unwrap them.” As she coaxed me to her boudoir her mirthful holiday chuckle filled my senses with visions of her sweet sugar plums dancing before my eyes.