Tradition. And So Much More. 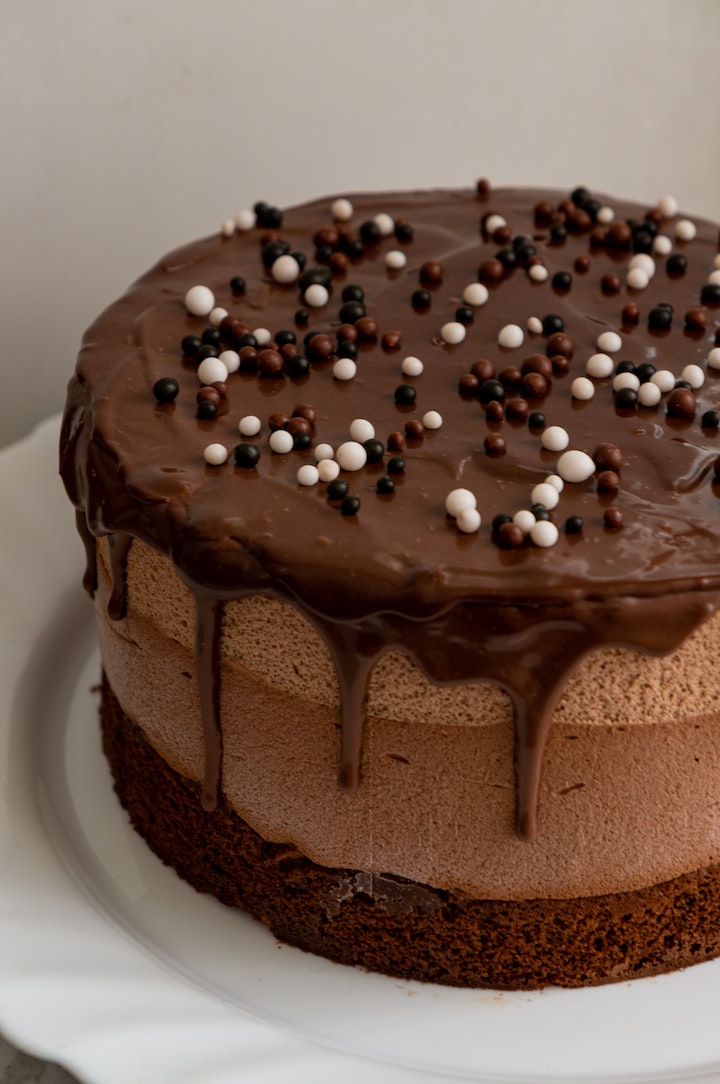 On New Year’s Eve, I got ready to run errands. My son and daughter were in the den, debating which movie to watch. I poked my head into the room. “Hey. You guys want to come with me?”

“I have to buy groceries for tonight.”

Peyton faked a yawn. “I’d rather watch The Sound of Music again.”

She scowled at him. “It’s a great movie.”

My son rolled his eyes.

This time, they both rolled their eyes. Cassie added a sigh. “Seriously, Mom. Why drive thirty miles away for a stupid chocolate cake?”

“One, it’s not stupid. It’s the best chocolate cake on the planet. And two, for the same reason I make pepperoni sandwiches for dinner and bagna cauda at midnight. It’s tradition.”

“Our dinner traditions go back generations through Grandma and Nonna.” Cassie started putting on her shoes. “Grandma doesn’t like chocolate cake, and Nonna would have baked one herself rather than going to a bakery, so a chocolate cake from Mario’s isn’t a family tradition. It’s a you tradition. Can’t we do something different for a change?”

“Didn’t I ever tell you why I buy Mario’s chocolate cake on New Year’s Eve?”

I realized Mike’s pride was probably why this particular story had never come up. Given my husband was now a vice president of a frozen food company, I thought his professional reputation could take the hit. Besides, we always told the kids there should be no secrets in our family.

When Mike and I were first starting out, we had so many dreams. Many of them were lofty, requiring a lot of hard work and better fortune, like retiring as self-made millionaires at thirty. (Boy, were we off the mark.) Others were simple and much easier to attain, like spending a night at the Rothschild Hotel in the city.

The Rothschild seemed like the height of luxury, and I really wanted to stay there, if only for an evening. I was earning minimum wage at the time, and Mike was working on commission, so money was tight. But dreams sometimes come true.

“How would you like to go out for New Year’s Eve?” he asked.

“You hate going out for New Year’s Eve.”

He grinned. “We’re going to the Rothschild.”

“What!” I squealed and squeezed him tightly before dancing around the room.

I had seen the advertisements. The hotel was having a eat-and-stay special that night, as well as a band in the ballroom. The whole package was cheaper than even one of the three options—meal, entertainment ticket, or room—would be individually.

Mike didn’t have to ask me twice. To do it right, I had to go shopping. “I’ll need outfits for check-in, check-out, dinner, breakfast, and something special for, well, let’s call it dessert.” I winked at him. “Oh, and probably a new coat. Definitely shoes. And a purse.” There was so much to do, and so little time. I reached for the phone. “I have to call Shelley. No, Gramma. I have the most luck with her.”

“Luck? What are you talking about?”

“Shopping. I told you. I have to get a few things before we go.”

“The package costs enough. You can’t buy a new wardrobe on top of it. We probably shouldn’t even be going, but I wanted to do something nice for you.”

His tone told me not to argue. And he was right. The gift was plenty. More than generous, especially on our salaries. Granted, I wasn’t going to the Rothschild as a millionaire, but I could go back in my thirties and make my grand entrance. The package deal in my regular clothes would have to do this first time.

I needed to stop watching dramatic TV. All those women in their designer clothes and Jimmy Choos were giving me delusions of grandeur that I couldn’t compete with. And frankly, didn't need to.

My company shut down for a week at Christmas, so on New Year’s Eve, I was off. My bags were packed about twenty minutes after Mike left for the office. Then I puttered around until his work day ended. It was the longest day of my life. When he got home, I didn't even let him come inside. I met him at the curb, yelled, “Let’s go!” then threw my stuff in the car. It wasn’t until we were headed toward the city that I noticed the time. “It’s only four o’clock. You’re home early.”

He snorted. He hated his job and his boss.

I was so happy, I monopolized the conversation, chatting non-stop. I don’t think he had a chance to get in a full sentence, if he even tried. When he exited in Maisonton, he anticipated my question and said, “It'll only be a quick detour. I'm craving cannolli. I’m going to Mario’s.”

Mario’s might be the best bakery on the planet, so I wasn’t going to complain. We got there just before they closed, so of course they were out of cannolli. The next best choice was a chocolate cake. We had never tried theirs before, but how bad could it be? Mario could take a blown-out tire, give it a swirl of ricotta crème, assign it a fancy name, and the result would be some kind of gastronomic masterpiece. We took our cake then hit the road.

Forty minutes later, we checked into the Rothschild.

I wasn’t impressed. The room had been grand in its day, to be sure, but it was in need of renovation. Cracked plaster, worn carpeting, faded linens… I had pictured a luxurious suite but had landed in something not much larger than our own bedroom, and one step up from ramshackle.

Hiding my disappointment behind a smile of freshly-applied lipstick, we set off for dinner.

It was still early, so we were seated immediately. Because it was a special menu, there were no choices to make, and the waiter brought us our first course—crab stuffed mushrooms. A favorite of both of ours, we dug right in. Cold and rubbery, they squeaked against my teeth.

“At least it’s real crab,” I offered, looking for the bright side. We left the rest of the appetizer untouched and waited for the salad—field greens with balsamic vinaigrette. The lettuce was limp, but the tomatoes were edible.

The main course was beef tenderloin Beaujolais with black truffle risotto. The meat was like leather. The rice, gooey. Arborio is a starchy grain. It’s supposed to be creamy. But gooey? No. It was like dipping into the second-grade paste jar.

We were crushed. Nothing was as we had hoped, and while this was a huge bargain for the Rothschild, it was still a lot of money for us to waste on substandard food and accommodations.

“But what about dessert?”

“You want more of this? We brought our own dessert.”

He was right. There was no point suffering through inedible offerings when we had something wonderful waiting upstairs. Was it the early hour? The special menu? The fact that we weren’t the hotel’s regular clientele so they didn’t put forth their regular effort? Who knew? But the food was awful, and it was a special night for us. We could at least end it on a good note.

In our room, we took the cake out of the mini-fridge, and I realized we had no utensils. A perfect end to a perfect evening. “I’ll call room service and ask for silverware.”

“They’ve been cleaning house for the last few months. Today was my turn. That’s why I booked this last week. I was worried I’d be on the chopping block soon and wanted to give you one special night before I couldn’t. Obviously that didn’t happen.”

“That’s what you meant in the car when you said they let you go. You didn’t mean early.”

We held each other for a moment. Then the panic hit me. “Oh, God! And we spent all this money! What are we going to do now!”

“Shh.” He stroked my hair. “We’ll figure something out. It’ll be okay.” He pulled me to sit beside him on the bed, then held me while I cried, rocking gently. I'm sure he needed reassurance, but he was the one comforting me. But that was Mike. Always a rock.

When I went from steady sobs to the occasional hiccup, he whispered, “Are you done?”

“Are you kidding me?”

Mike opened the box, scooped his finger through the frosting, then held it to my lips. “Open up.”

He was crazy. I shook my head but tasted the icing. It was pure heaven. Decadent, velvety, with just a hint of sweetness. All I could do was roll my eyes and moan.

We sat there eating our dessert with our fingers in the rundown room of my “dream” hotel. At that point, I didn’t know what the future held for us. But we had each other, and we were happy with that. And the cake was incredible.

“I vowed I’d order that cake every year on New Year’s Eve. As a reminder that your dad could take any bad situation and make it better. And that no matter what, we’d be okay in the end.”

I nodded. “From his first job. He was a car salesman.”

“He was supposed to move into the finance department after six months, but his company didn’t keep that promise. Or a lot of other promises. But that's a story for another time.”

“I can’t see him selling cars.” She shook her head.

“He’s actually an incredible salesman. He just doesn’t like to do it. He once gave a customer a payment that was so high, he couldn’t make the number work no matter what he added. Floor mats, free oil changes. He’d have thrown in our first born if I’d have let him.”

“You should have.” Cassie winked.

He threw a dirty sock at her.

“Stop.” I shook my head. “Why are your socks lying there?”

“Put them in the laundry room.”

“Ugh.” He scooped them off the floor then trudged through the kitchen.

“I’m ready to leave. You guys coming with me?”

“Let me get my jacket.” Cassie headed toward her room.

“Can I drive?” Peyton asked as he came back.

He held out his hand for the keys.

“Really, Mom?” He cocked an eyebrow.

“What was I thinking?”

They walked to the car. After their obligatory argument over music, I intervened and put on a Christmas playlist. Both kids groaned, but soon a favorite carol came on, and even Peyton started singing.

After the song ended, I said, “If you want, we can choose a different dessert at Mario’s. You know, start a new family tradition. Something you two are involved in picking.”

Peyton glanced at his sister in the rearview mirror. Then he said, “No. We want the chocolate cake.”

Staci's love for writing is only surpassed by her love for family and friends, and that relationship-centric focus is featured in her work, regardless of the genre she's currently immersed in. https://stacitroilo.com

More stories from Staci Troilo and writers in Fiction and other communities.