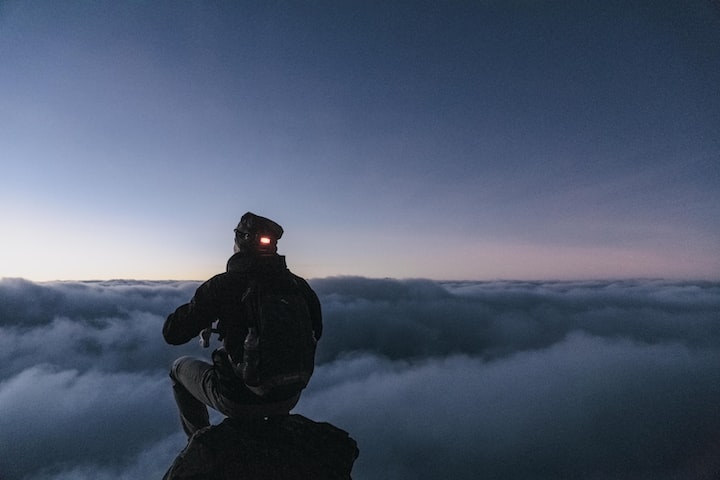 Photo by Lê Tân on Unsplash

Author's Note: This short story doesn't have a nice tidy ending but instead is open-ended.~ C

Jonah sat on the rocky outcrop overlooking the ocean. He liked to come up here as much as possible. It was a not-so-subtle reminder of…everything. He felt an affinity with the water, with the rock he sat on. They reminded him of how it used to be. The water, the rocks, the few trees that hadn’t been infected and were still alive, were natural, normal, untainted. Like him.

“Jonah!” A voice shouted up from the bottom of the path that led to his sanctuary. Jonah turned, and had to shield his eyes as he watched the man walk toward him, the sun glinted eye-achingly bright off the metal of the man's prosthetic leg, arm, and the majority of his face, save his left eye, cheekbone and one natural ear that made his face look strangely off-kilter. The virus had taken the other one, and he hadn’t bothered with a false one, when he could hear just as well through the mesh that covered his ear canal.

“Come on! You’re going to miss it if you just sit around up here.” The man towered over him as he reached his side. “What do you like about this anyway? There’s nothing up here.”

Jonah looked up at Stephen. He had been his first real friend. And he still was. Even if, technically, he wasn’t entirely real anymore. No one was, anymore. No one except Jonah.

Jonah stood. “You know I don’t like it,” he said, almost whining.

“Only because you’re the outsider!” Stephen said, grinning. What was left of his real skin drew up in a smile. The mechanized side of his face did the same, but it didn’t have the same effect and instead turned Stephen into a grotesque thing that Jonah had to turn away from.

“Precisely,” Jonah said. “I am the outsider. And I just don’t think everyone should be celebrating something like this.”

Stephen narrowed his one good eye at Jonah. His left was synthetic and made of a smooth polished substance. “Celebrating how the world is now?”

“Get over yourself, Jonah,” Stephen spat, turning abruptly and heading back down the hill, not waiting for Jonah to follow. “We’re still human, and we’re still here, still civilized. It hasn’t won. We have won over it. That’s why we have the parade. Because we’re proud. Because we’re still alive,” he said over his shoulder.

Stephen whirled, the pistons in his leg moving smoothly. “No buts, Jonah. We are still here. We are still people. Just because you may see us like freaks, just because you are the only one left untouched by the disease, doesn’t make you superior. You’re the minority now. You’re the odd one out, you’re the freak because you aren’t altered. You might think you’re somehow special, or more important than us, because for whatever reason, you didn’t catch the virus that ate the rest of us up from the inside out, and made us replace ourselves with metal and plastic and synthetics, but you’re not!” He shouted the last words over his shoulder again as he continued to stomp angrily down the hill.

From his vantage point, Jonah could see the town arranging in the square for the yearly Survivors parade. They looked like small troops of ants, being corralled in a line by spectators on either side of the parade route which wound throughout the city, beginning and starting in the town square by the large, ornate fountain. It used to be a man, a normal man of flesh and blood, riding a horse and carrying a large flag in support of the country’s victory. But since the virus that had taken so many and utterly changed so many people forever, into something other than totally human, the soldier on his horse had been replaced by someone that was now the norm in the world – someone part flesh and blood and bone, and part undead, unfeeling machine. The horse had disappeared as well since the disease had first decimated their population, and then, in a few short years, led to their extinction, along with so many other animals around the world.

But now that the world had evolved, and, thanks to the virus, people had evolved as well, they had less need of domesticated mammals to help live their lives efficiently. People had become the workhorses themselves. Most people had mechanical legs, since the virus started in the extremities, and mostly started in the legs, so that they were the first parts damaged, destroyed, replaced.

From Jonah’s position on the hilltop, he watched the sun glinting off the statue of the Changed Man in the square, and lighting up the ant-sized people below, where the rays hit their mechanized parts that many refused to cover up with clothes. They lived with their new selves exposed to the world, as a badge of honour, pride.

It had been a full three years since the disease had struck and spread across the planet like wildfire. Yet still to this day, Jonah was convinced that he would still somehow contract it and become like them. Involuntarily his lips turned down in a grimace.

His watch beeped on his unassuming arm of flesh, bone, blood and he sighed. It was a reminder of his appointment with the researchers. They wanted more blood, more scans, more pokes and prods with needles and electrodes. He was the human guinea pig. Everyone wanted to understand why he was the virgin human – unmarred.

He moved down the hill. Stephen had long since disappeared and joined the masses of his brothers and sisters, where he belonged. An air horn cut loudly through the still air, signalling the start of the National Anthem, entirely rewritten after the outbreak, and the parade.

It wasn’t easy being an outcast.

Like this story? if so check out another one below!