On a Runaway Train 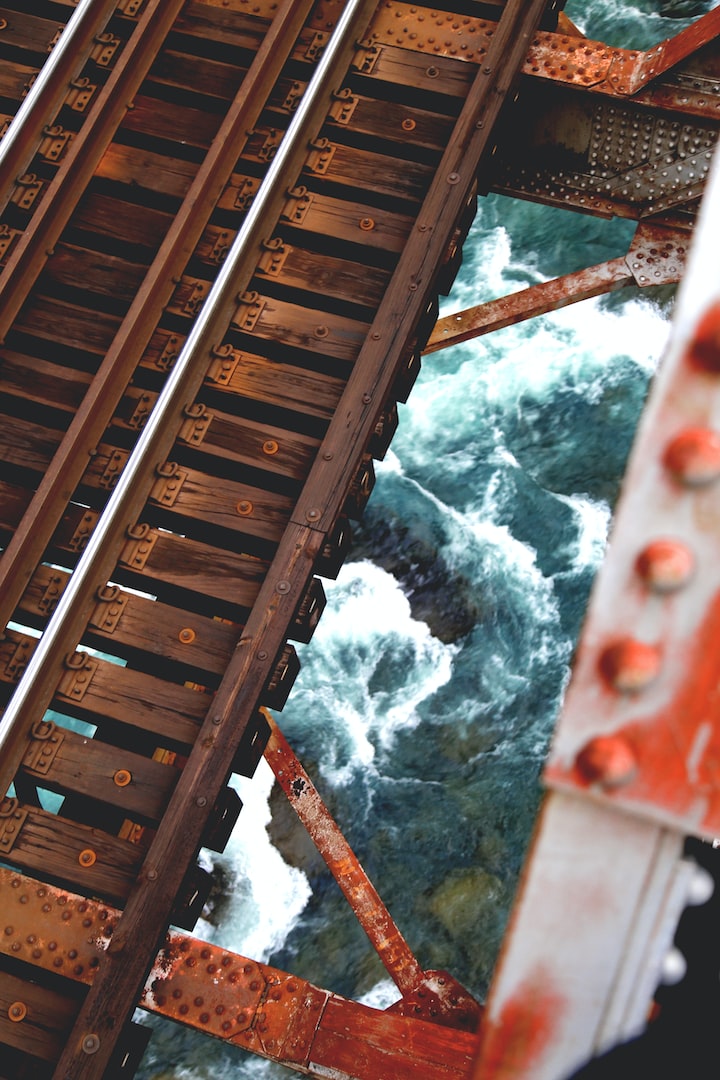 Photo by Jordan Steranka on Unsplash

Jessie breathed hard, she felt cramped, her head was pounding. She opened her eyes and it was dark except for a small crack of light. She was in a box, a trunk of some sort as she felt around. The last thing she remembered was following Dr. Lance. He must have caught on. She knew he was a dangerous man, but it was her job. The Consortium hired her to find out what Dr. Lance was up to, and this is where she ended up.

In all her years of being a private investigator she hadn’t ever ended up in a situation like this before. She tried to recall what happened to get her here. Dr. Lance had left the lab and she followed him. She made sure to stay a good distance away and didn’t think she had been spotted. Apparently she was.

She took stock of her situation, she wasn’t tied up, her head was throbbing, and simply pushing on the lid with her hands didn’t open the trunk. The familiar feel of her gun on her hip wasn't there, and she highly doubted she still had her cell phone. She listened, slowing her breath, she had to figure out where she was. She knew she was moving but it wasn’t a car, there was a cracking noise. It had to be a train, she didn’t travel by rail often but that was the only thing that could explain the sound. There weren't any voices, other than the train there was no sound at all.

First step was to get out of the trunk. She rocked her body back and forth, the trunk moved. She could knock it over. She felt the seams and found the side with the latch. If she landed on that she could break it. She continued rocking until she felt herself tipping. She landed with a thud and heard a crunch. She repositioned her legs and pushed until the lid gave way. The light and air flooded her face, Jessie sucked in big breaths of fresh air.

She stood stretching her legs and checking to see what was intact. No broken bones, the only thing she could feel was a bump on her head. She checked her pockets, empty. It wasn’t a surprise, her cell was gone and she never planned on boarding a train, so why would she have a ticket. If she could get out of here she could get help. It wasn't just regular help, more like the FBI. Dr. Lance was on the verge of releasing a pathogen that could kill millions. The time and place was unknown but she had pictures and audio recordings on her phone. Fortunately she backed her phone up every day, not everything would be lost.

She found the door on the side and and with some effort managed to pull it open. She looked out the door and her heart plummeted. It was nothing but a straight drop. She looked towards the front of the train and found there wasn’t anything but an engine ahead of her. She yelled but her voice didn’t reach the engine. It was impossible to see if anyone was even in there. It took a moment but she realized the train wasn’t slowing. She looked around the car she was in, there had to be something to help her.

She started going through bags and suitcases, not a cell phone, gun, rope, or anything else useful. It was then she spotted her nightmare. It was vial upon vial encased in a wooden trunk much like the one she had found herself stuffed in. This was more than an inconvenience to her life, they were going to kill her and millions of others. She had been placed on a runaway train for a reason. Once it crashed the pathogen would be released. She had to stop the train. She closed the lid of the trunk gently, relieved she hadn’t hit it in her initial attempt to escape.

Jessie went back to the door. She looked ahead, they were still going for now but they were headed downhill with no sign of stopping. She looked for a way out, it seemed the only way was a ladder to the top of the car. Was it even possible to stop the train? Could she just throw the trunk over the cliff and be done? She peered as far as she dared to see what lay beyond. A gorge, full of water with boats in it. If she threw the pathogens it could kill the fish, destroy the water supply and poison people. That wasn’t an option. She had to try and stop the train.

She wasn’t normally scared of heights but being on a mountain side on a runaway train was a whole new type of adrenaline. She took a deep breathe before grabbing for the ladder. She turned with her back to the drop, stretching her foot to meet the bottom rung. Her foot hit the solid metal bar. She pushed testing it and she slipped. She held on, one hand gripping the ladder, the other squeezing the wall between her forearm and her chest. She felt for the metal bar again and found it, this time she didn’t slip. She hurried up the ladder and was grateful to find grips on the top of the car. She climbed to the front. There was nowhere for her to get down.

There was a hitch connecting the engine to the train car. There was a small platform on the back of the engine car. If she could jump she would live. If not she would fall between the tracks and be run over by the speeding train, and countless others would die.

Jessie stood slowly, the train still wasn’t slowing but it was stable. You’re going to die ran through her brain. She pushed it back. She had to do it, she could do it. She steadied herself, put one foot behind her to give her room to launch. She had to hit it just right.

She jumped. Her foot hit the train and slid. She grasped for anything, her arms flailing. Her hand found railing and so did her ribs. She heard the crunch as they hit. The breath left her for a moment. She clung to the railing as she got her breath back. She knew she had to hurry. She swung her legs over the railing righting herself.

The controls for the train were directly ahead of her, she could see them through the door, but didn’t know how to use them. She went in the door and then she saw him. He appeared as if he was sleeping, slumped over in his chair. The telltale sign of foam dried on the side of his mouth spoke of poison. He wore the uniform of the conductor. She put her face put to his, listening and feeling for breath, there was none. There was however the ominous scent of almond, cyanide. It must have been something he ate or drank on the train. They had to make sure he got the train moving before he died.

She looked back at the controls, where was the lever? All the shows she ever watched about trains, they had a big lever. If she survived this she would take a train conducting class. She looked back at the conductor, if he had a cell phone she could use that. She wished she had latex gloves. She was not enthusiastic about sticking her hands in someones pockets who had been poisoned. She didn’t know how he was poisoned. At this point she didn’t have a choice.

Jessie patted the outside of his pants and felt the familiar rectangular shape of a cell phone. She hurriedly grabbed it from his pocket. Locked. Of course it was, who didn’t lock their phone? She hit the emergency button on his phone and dialed 911. Dead air. There was no cell service out here. She was tempted to throw it but it was the only cell phone she had. She took another look at the controls, there had to be something. Then she spotted it. It looked like a broom in the corner. The train was going so fast, even if it worked she could still die. She grabbed the handle, hoping against hope, the runway train would …”STOP!”