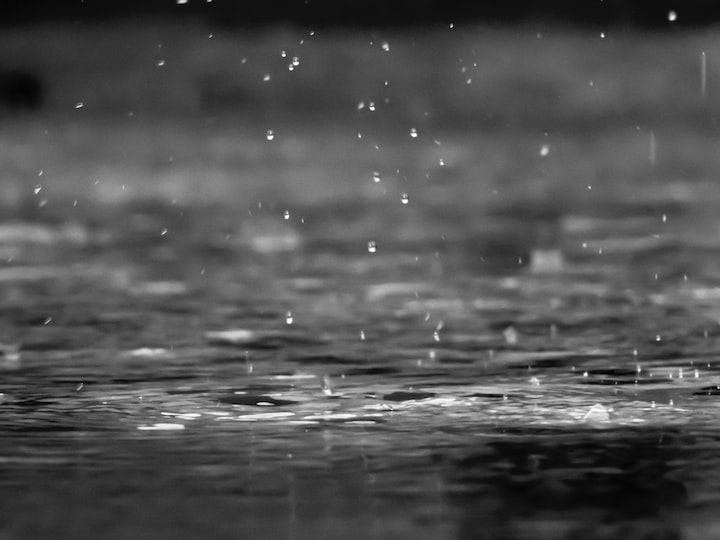 Photo by reza shayestehpour on Unsplash

The sky turned gray, clouds thick and heavy overhead. Helene watched through her window in trepidation.

She did not want it to rain.

She went outside and inspected her yard for anything that might catch the rainfall. She flipped the birdbath over, spilling the water she’d placed there. That water, at least, had been safe. She brought in the garden trowel she’d forgotten the other day. A plastic cup that had been thrown over the fence by the neighbors during a party went straight into the trash. There was nothing else she could remove.

She knew it would not be enough.

The wind picked up, the clouds darkening, churning. Helene went inside and locked the doors. She ran to the kitchen and grabbed the salt.

As she drew lines of salt in front of the doors and windows, she heard the distant sound of thunder. Once the last bit of salt was laid down, Helene stood at the back window, watching.

The rain began to fall, a sudden waterfall from the sky. It battered against the roof. The trees bent beneath the onslaught, the flowers in the garden surrendered and bowed.

Helene knew the street gutters must be rivers by now, flowing down road, but moving water was fine. Standing water on the other hand…

A puddle was forming in her backyard. There was a depression in the grass, something she hadn’t had time to fill in. The rain pooled within it, a small pond now covering the lawn.

The rain continued to fall, the drops splashing over the surface of the new body of water in Helene’s backyard. She watched it, hoping all would be well but knowing that hope was false…

Something began to emerge from the water.

It started as a small bulge, like a bubble rising up. But it kept rising. Something dark, something fetid, like a marsh come to life, rose out of the water. Helene’s breath shook out of her as she spied it through the window. The creature stepped forward, spraying water into the air as it moved. Other bubbles began rising around it from the puddle as the rain kept falling.

Helene double-checked the salt at the back door.

No one else ever seemed to see them. People would find the damage and blame the wind, the torrential downpour. They never thought there was something else out there.

As for the deaths, they were always declared accidents. Another person slipped and fell in the mud, breaking their neck. How tragic.

Helene knew the truth. She’d always known, but no one believed her.

The creatures lurched across her yard. But they couldn’t climb the fence and the gate was locked. They were penned in. They had nowhere to go.

They staggered toward the back door of the house.

Helene hovered by the door, holding a blow torch. They hated fire. But the torch could only do so much.

Something squelched against the other side of the door.

She didn’t actually know, however, if that was true.

Something hit the door, hard. Helene’s hands shook as she held the torch in front of her like a gun.

The door shook as much as Helene’s hands. The salt scattered slightly, but the line stayed in place.

Helene bit her lip until it bled. Another hit like that and…

The rain stopped. The deluge against her roof quieted. The plinking on the puddle dissipated.

Helene stood there, vibrating with relief. She stumbled to the window, her legs wobbly from adrenaline. The creatures had disappeared.

With a sigh, she placed the blow torch down on the windowsill. She left the salt by the door.

The forecast said it would rain again tomorrow.