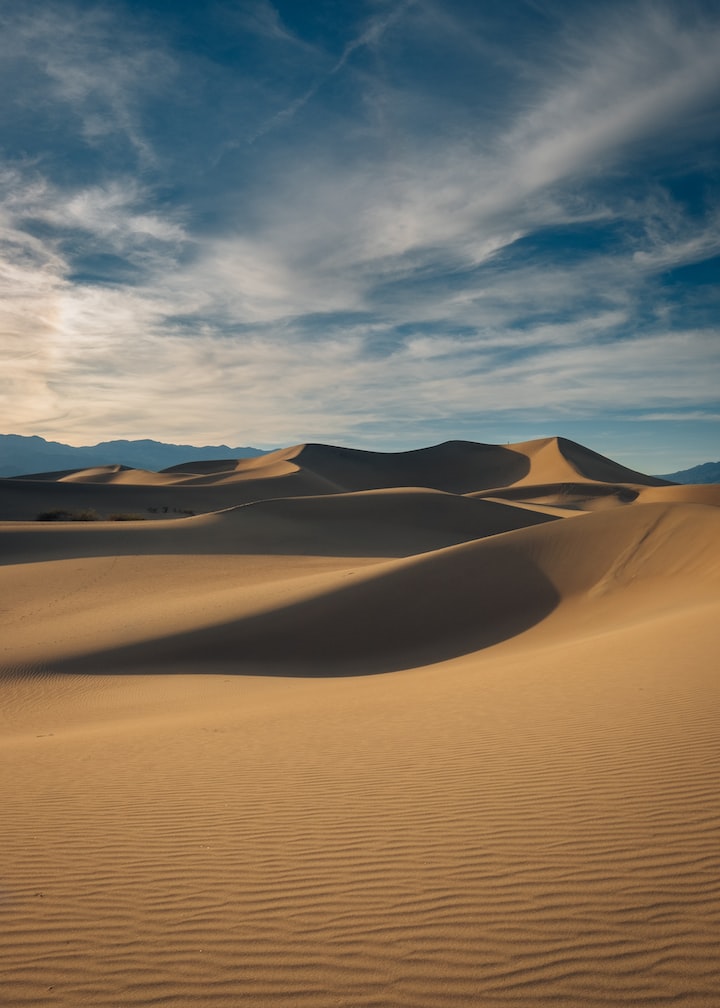 "This is an odd thing to find in the desert," Robby said staring out across the frozen pond.

"Yes, and it's not even cold here," Chiara replied, "how is this even possible?"

Robby and Chiara have been riding for hours, lost in the desert. They were about to give up hope until they saw trees near the edge of some mountains. Where there are trees there has to be water, they thought. So, they headed that direction and found this frozen pond. Robby slid down the bank to investigate.

"It may not be cold up there," he said, "but it's freezing down here. All of the cold seems to be coming from the water."

"Didn't you tell me about something like this," she asked.

"Well," he said, "I did read about this phenomenon where a glacier comes in contact with salt from a dried-up Salt Lake. The ice melts without warming up. The supercooled water flows into a cave and stays there until there's enough pressure to push it to the surface where it instantly freezes. But only one guy has ever seen it. When the scientific community went to investigate, no one could find it."

"It seems that we have found it," Chiara said, "now what do we do?"

They entered the oasis and proceeded to explore. There were trees and other plants everywhere. The air was slightly more humid here and much cooler than in the open desert. There were also small springs everywhere. In the middle, and at the back of the oasis, there was a nook at the base of the mountains. It was between two mountains that were smashed together. When Robby and Chiara got there, they saw the large spring

They walked around the edge of the spring. Robby on one side and Chiara on the other. When they arrived at the back wall, there was nothing but solid rock.

“Now what do we do? Chiara asked.

“I say we camp here tonight, then at first light, we follow the mountains north,” Robby said.

“I agree,” Chiara said, "but it's still a long time till dark. What shall we do in the meantime?”

“I don’t know,” Robby said, “did you have something in mind?”

“I was thinking that maybe we could wade in the pool first,” Chiara said. “I’m still hot from riding through the desert, and I’m dirty. I know the water isn’t that deep, but it’s enough to cool off and get clean.”

“That sounds like a great idea,” Robby said. "There's one problem though.”

“And what would that problem be?” Chiara asked. “I know that you can swim. Even if you couldn’t, the water looks like it’s only waist deep at the deepest part.”

“It’s nothing like that,” Robby said. “The problem is that I don't have a swimsuit. I have clothes to change into, but I don't want to carry wet clothes around. And they would never dry inside my bag.”

“That does sound like a problem,” Chiara said mischievously. I have a solution.

"And what is this solution you speak of?" Robby asked.

"We should take our clothes off and skinny dip,” Chiara said.

“Out here?” Robby asked, “That offends my delicate sensibilities. Let's do it!”

Robby stripped off his clothes and quickly shoved them in his pack which he left sitting on the edge. Then he got into the water. Chiara undressed slower making sure Robby was watching. It made her feel sexy and attractive that he still wanted to see her like this. It probably wasn’t logical thinking, but she never had anyone look at her like that. She was still just a child to her people. She finally got into the water. The water was perfectly clear and only waist-deep in the deepest part. They sat down near the edge and cleaned themselves in the spring. While they were doing this, they saw a single fish swimming in the water.

“Where did that come from?” Robby asked, “I’m pretty sure that I didn’t see any fish before.”

They watched the fish swim around for a long time. It was just swimming in a circle. Robby moved toward the fish and spooked it. It swam toward the back of the pool. Robby followed it, but it suddenly disappeared into the wall. Robby approached the wall holding his hand out in the direction of the wall. Right when He expected to touch the wall, there was nothing! He walked forward and found himself in a tunnel. He looked at the wall as he stepped back out.

“You disappeared,” Chiara said, “is it some kind of magic?

“No,” Robby said, “there’s a tunnel. It’s intricately carved to look like a flat wall. It’s just an optical illusion.”

They both grabbed their packs and walked into the tunnel. It wasn’t dark in the tunnel. Robby soon figured out why. There were runes carved along the wall. He recognized it as a permanent light spell. There were steps just in front of them that ended just above the waterline. They climbed out of the water, dried off, and dressed. Cavall and Sierra saw them disappear into the wall, so they followed them into the tunnel.

The tunnel wasn’t too long. It was only about a hundred yards or so. As they walked, they marveled at the intricacy of the carvings. It looked as if it was intricately carved by some ancient civilization. It was most likely carved using magic, he thought. It would take more than a hundred years to carve this by hand.

Upon reaching the end they exited the tunnel. It was like a lost world. It was a forest valley, but the trees were beyond huge. Some were larger than the trees in the colossal forest. It was impressive, but it didn’t surprise Robby. What really got his attention were the giant mushrooms the size of normal trees. They were everywhere. There were other plants too. They saw giant ferns, some kind of orchids, even some carnivorous plants. These carnivorous plants were huge. The pitcher plants were the size of a refrigerator, and there was a Venus flytrap big enough to close around a large dog.

As they walked, they realized that everything in this valley was giant. There were giant bugs, giant birds, they even saw what looked like geckos that were the size of a horse. None of them seemed interested in them so they rode on. The further they rode the more they started to realize, that they all seemed to be avoiding the trail that they were traveling on. If it was some kind of magic, they didn't see any runes.

“I don’t think it’s magic,” Chiara said, “it seems like every time they notice the trail, they turn and go the other way. It’s like they’re scared of something.”

“You may be right,” Robby said, "but I think we're almost on the other side of the valley.

There was a group of giant mushrooms at the end of the trail. They were a little low, so they dismounted and walked under them. On the other side, there was a rocky trail running up along the mountains. Lucky for them it was a wide trail. They could see huge boulders everywhere. What they didn’t see was what was flattened against the rocks ahead. Just as they got to the trail that started up the mountain, a giant scorpion sprang from its hiding spot against the rocks. Chiara was closest to it, so it charged at her with its tail curled up ready to strike. When Robby saw it, fearing that this could be the last time that he saw her alive, he yelled no! It was all that he could do at that moment. He saw every minute that they had spent together, flash before his eyes. His brain stopped for an instant, and his body went cold as he expected to see the worst.

That single second stretched out for an eternity, but there was no scream of pain. Only deep silence. The scorpion stopped short and backed up a step. Why is it so quiet? Robby thought. He looked around. Every creature within hearing distance stopped and was looking at Robby. Chiara stepped back as Robby moved to put himself between her and the scorpion. As he did this, he noticed that the gaze of the creatures followed him. He raised his hand up, palm out, and moved it back and forth. They watched his hand intently. Then he lowered his hand palm down. They all went down and flattened themselves to the ground.

Chiara was stunned. “How did you do that?” she asked, “it’s like they have to obey you!”

“I told you about the split tail scorpion sting,” Robby said, “well what I didn’t tell you was that Malik said, “a man who survives a double sting of a split tail scorpion will rule all in the land including the scorpions.” I thought it was just superstition, and he meant it figuratively.”

“Well, this looks more literal,” Chiara said, “try telling them to go about their business.”

Robby told them, and they went back to what they were doing like nothing ever happened. He turned and looked at the scorpion, which was still flattened on the ground before him. He seemed to be waiting for him to say something. That gave Robby an idea. He turned to the scorpion and ordered him to get them safely to the end of the trail.

The scorpion instantly went into defensive mode as he walked up the trail ahead, only pausing to make sure that they were following. They quickly mounted their Moretells and followed. They saw more scorpions on the way up. There were a lot of them. Robby and Chiara realized that they must be communicating somehow, and that word spread fast. As they rode by, the scorpions would come out of their hiding spots and bow low to the ground with their tails pointed straight up into the air. They would then scurry back to their hiding spots. When they got to the end of the trail, they stopped. It appeared to be a dead-end, but Robby knew better.

Robby turned to the scorpion and simply asked, “where?”

The stories that you see labeled chapter one - chapter sixteen are chapters from my completed book, The story of Promiseum - Dream Walker. So if you decide to escape to my fantasy world, start with chapter one and read them in order.

More stories from Llwyd L. Brenin and writers in Fiction and other communities.