The Last of the Winter Pears

A young woman's life is rooted in the past of a hilltop pear orchard in Umbria, but she longs to stretch her branches under a new slant of moon light. 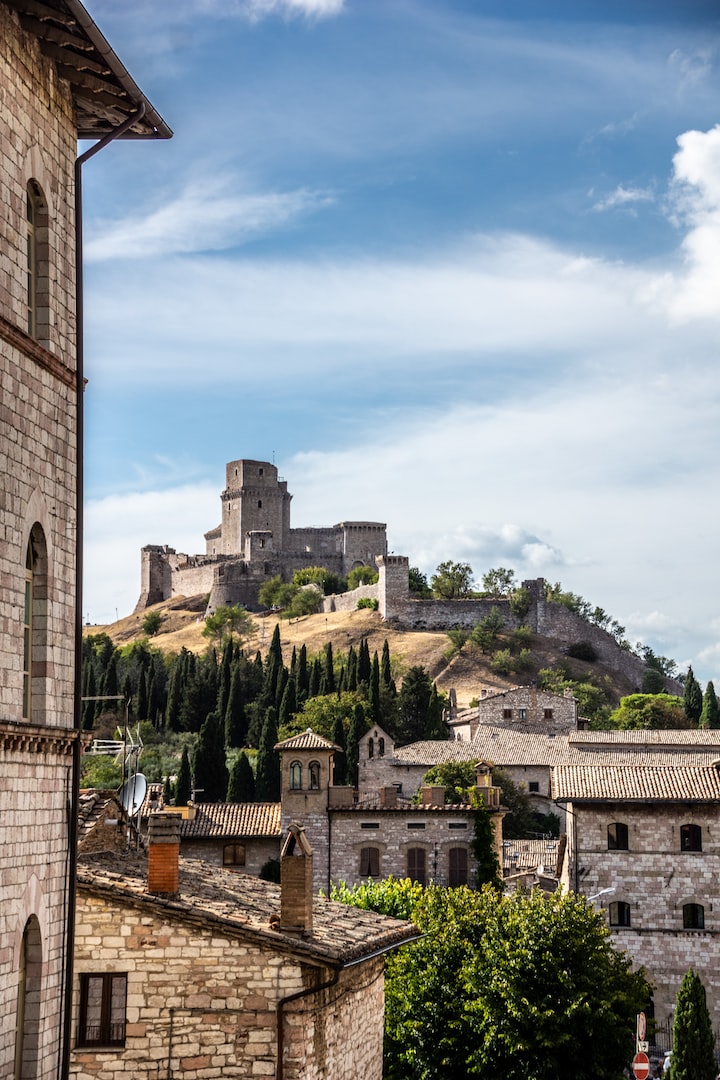 Photo by Achim Ruhnau on Unsplash

My nona once looked at the lines on my palm and said fate could not touch me. "It means, dear one," she whispered, "that you are outside the pattern. You must make your own path."

A strange notion indeed, when no one in my family had left our little hilltop villa with its orchard of ancient pear trees for generations.

Our winter pear wine was once known as a magical elixir, a healing potion. After all, the women in my family have always been called stregas. Witches. Wise women. We were once respected for our healing knowledge.

But as the great war drew to a close, so did our sway over the village. Though everyone still calls us stregas, only the elders really believe it.

"They knew the world before it was ripped apart and remade." My nona said to me one autumn night. "They know the old ways. The young folk can only know the new."

I put a few slices of pear cake onto a tray.

"The war ended ten years ago, nona." I told her, leading her to the terrace. "Surely that's enough time to see that the world has changed." Her walking stick thumped against the stone floor.

"I'm afraid this is not a matter for mother time, dear one."

We sat in the setting sun, watching the light on the pear trees turn from golden to magenta. It wasn't until there was only a few crumbs left on the plate that the knock on the door came. An elderly villager complaining of swollen knees. Nona went to go tend her in the front room, while I cleaned up the tray.

Dusk was falling outside. Surely by now the carnival would be underway. A whole show of fascinating, enthralling acts. The world come to Umbria.

I went inside. "I thought I might go down to the village and see the carnival."

"Of course, you do know tonight is the full moon." She said.

"I'll be back for midnight to help harvest the pears."

Nona nodded. "Well, I'm going to rest until then. You must be sure to return before midnight, my dear one."

"I shall see you then, Nona." I said, wrapping my shawl around me and taking my cloche off the hook.

Autumn made the night cool and crisp, the rising moon a silver orb.

Just on the edge of the village, the caravans came into view. Red, blue, yellow and green, with vines, faces and animals painted across wood and over the little arched doors.

How wonderful it must be, I thought, to not be bound by ancient roots like an old tree, but to move over roads and waves like the sparrows in spring.

Fortune tellers, strong men, tame lions and disappearing women. The whole place seemed to hum with magic. But this was not the same magic of the winter pears. This was quick and new and all a show. This was fun and light, without a hint of the old world.

"Magnificent, isn't it?" The voice came from behind me.

A young man stood there, the sleeves on his white shirt rolled up, his cap slightly askew.

"Cosimo, at your lady's service." He offered his hand, and I took it.

"Sabina. I live around here."

He nodded, replacing his cap. "I'm with the carnival. They need strong fellas like me to lug things around." I nodded, unsure what to say. "I think they only keep me around cause I'm friends with Diana." He jabbed a thumb over his shoulder. "She's the lion."

"I haven't seen a lion before." My voice came out warm, like melting honey.

"Would you like to?" Cosimo asked, offering me his arm.

Cosmo led me toward a cage, a blond mound lazying in the back corner.

"Diana." Cosimo whispered. The lion lifted her head, and then slowly stood up and sauntered toward us. Her amber eyes locked onto mine, and a bristle of fear made me want to grab hold of Cosimo's hand.

"It's alright," he laughed. "She's practically tame." He studied me for a moment. "You know, you have lion's eyes. Like warm sunshine."

Diana stopped before us on the other side of the bars, flicking her tail.

"She's sad." Cosimo replied. "She shouldn't be locked up, begging for scraps. She belongs roaming across the wild savanna. One day, I'll take her back to her home, set her free."

Cosimo showed me around the carnival, and then he bought me a candy apple.

I watched him for a moment. "What brought you to the carnival?"

Cosimo played with his sleeve. "I lost my family in the war. The carnival found me, I suppose."

He shrugged again. "There are thousands of people with stories like mine. Some worse, I'm sure."

We watched the moon for a while.

"Tell me about you, Sabina."

"Well, for me, life moves around the cycles of the seasons. My family have been here for generations, tending the pear orchard up the hill. The villagers call us stregas."

"And are you?" He asked with a mischievous glint in his eye.

"We make pear wine that'll cure all ailments. We pick our pears only after midnight, under the light of the full moon." I stood up. "And speaking of which, I must get back home."

"You didn't answer my question."  He said.

I clasped my hands together to keep from reaching for him. "I must go."

"But won't the pears not be ripe yet?" He asked, grabbing hold to any thread he could.

"Winter pears don't ripen on the vine. We pick them when they're still green and hard, and then they ripen properly in the cellar. Otherwise, by the time they look ripe, they're mushy and ruined inside."

He nodded. "Do you grow summer pears, too?"

"We do, but my family has always made our wine with the winter pears," my mouth quirked to the side thinking of the taste,"I find winter pears so much more bitter."

"I don't want you to leave." Cosimo whispered.

"You'll be here tomorrow?" I breathed.

"Yes, but we leave the next morning."

I nodded.  "Then I'll see you tomorrow."

He leaned forward and kissed my hand. "Goodnight, beautiful Sabina."

"Just in time, Sabina." Nona said when I got to the villa. She was bundled up, her old scarf wrapped tightly around her.

The bright moon cast its light across the orchard, resting gently on our pear trees.

We carried woven straw baskets on our hips, starting from the far rows and working our way toward each other. My mind was down the hill, thinking of the way the moon made Cosimo's hair glimmer, the way his mouth turned up when he watched me speak.

I felt my cheeks go pink.

Nonna gave me a look. "The young man your eyes are dreaming of."

"How could you tell?"

"Must be someone from the carnival. You've met all the villagers. Nothing too intoxicating in town."

I bit my lip. "His name is Cosimo." I couldn't help smiling.

Nona patted my knee. "Do be careful, Sabina. The ways of men are not always kind."

Nona sighed. "Men are never satisfied, my dear one. They always flitter away. Your father, my husband, my father..  it's always the same."

"Surely, not every single-"

"If your Cosimo proves me wrong," she put her palms to the sky, "I'll never say another word on the matter."

We finished picking the pears just as the dawn began to break. We trudged inside, backs sloped under the weight of pears. I slept until the afternoon, and then rose and bathed. Nona and I ate lunch together, and then I told her I was to be off to the carnival again. She kissed my cheek, then held fast to my hand.

"Be careful, dear one." She placed a hand over my heart. "Be careful."

Her eyes shone with knowing behind her wrinkled cheek.

Cosimo was waiting for me by the road. He took my hand gently, and kissed it.

It was not until dusk that we sat down in the grasses.

"Ah, we have not yet been to the palm readers!" Cosimo said, looking past me to the little booth beyond. I shrugged.

"I can read it myself. My nona taught me how."

"Than you must read mine." He showed me his hand, palm up.

"Well… this line here means you'll take a journey, though I… can't tell if you return or not."

"The carnival is set to go overseas to America soon."

My finger lightly traced along his palm. "You are passionate and head strong, and the curve here means you're very romantic."

He was smiling at me in the dusk light, his eyes soft and full of something.

"And what does your palm tell you?" He asked, leaning ever so closer to me. My heart felt like the popcorn machine two tents over.

Cosimo's face was very close now, his eyes alight on mine. "And what does that mean, exactly?" He asked me softly.

"I'm still not sure." I whispered.

"Come with me to America. We could stay there, or we could travel the world. We could have a life together."

A strange feeling in my stomach. "Really?"

"Why ever not? You could do palm readings with the carnival. We could be married."  His eyes glitter. "Hiding away up the hill, following old ways that were lost with the war… a crumbling life doesn't suit you, Sabina."

"But what if I could make more of it?" I asked, speaking aloud before I had really considered what I was saying. "What if I could bring the old ways into the new?"

"What if you come with me?" He repeated.

By the time dawn rose, I was buttoning up my dress and sitting barefoot in the damp grass. Cosimo had fallen asleep. My mind fluttered like a butterfly's wing from one thought to the next.

"You're not coming." Cosimo's voice was soft behind me. I shook my head.

"It was worth the try." He said lightheartedly, but his eyes were sorrowful.

"I hope you do, Sabina." He touched my cheek. "Little lioness." He whispered against my lips.

Nona was at the kitchen table.

I did not ask how. She always just knew.

I sat down with her, feet sturdy on the centuries old stone floor.

"I've been thinking," I started. "I want to make wine with some of the summer pears."

Nona made a face.

"Oh dear one, it will be far too sweet."

"Not if we add cinnamon, and cloves. I think it's time we tried new things, Nona. Don't you? After centuries?"

She watched me for a minute over her cup, eyes dancing. "Well... A new wine will need a new label."

It came without prompting.

Some weeks later, I wrote a letter to Cosimo. Nona and I had just finished bottling the last of the winter pears.

I sat at the desk in the sunshine, my letter to Cosimo before me. I wanted him to know that our daughter in my belly would be a child of summer, and that she would have time to ripen on the vine.

More stories from Gillian Pegg and writers in Fiction and other communities.