by Ronald Gordon Pauley 5 months ago in family 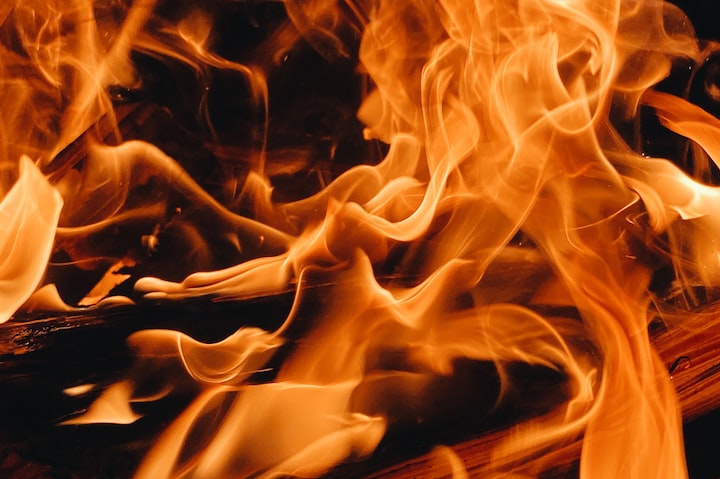 Photo by Max Kukurudziak on Unsplash

Flashes of color, blinding in their intensity bring pain to my eyes. Great swirling clouds of smoke move between the buildings, billowing high above the rooftops and spreading through the woods, filling the gaps between the trees. I can no longer see the path as I stumble along in the intense heat and choking fumes, but I must, I must keep going; there is nothing behind me now, nothing to go back to. I have to go on.

My head collides with the trunk of a massive oak, leaning crazily across the path; more pain. My lungs now burn from the fumes and the exertion; I want to rest, but dare not, the flames will consume me, I will become a seared remnant in a forest of charcoal. I see some trees already, stripped bare of their leaves and outer skin, bared to the flames of fury, life fluids boiling, steaming in their agonies, laughter echoes around me.

Manic laughter of the destroyer at work, expressing his glee at the torture and fear spreading before him. The laughter has a face, no, many faces. Out of the stinging white smoke, giant faces now grin at me, red swirling eyes, huge cavernous mouths gape at me, rotting teeth crooked and green. Faces of women, ancient and wrinkled, crones and witches, young faces – children with eyes of demons, of working men and scholars, beneath them all now only bones as their flesh is stripped bare. Yet they continue their laughter, their taunting as I stumble with failing strength to escape the fury that follows me.

“He’s got a fever, he’s burning up” one laughing face cries. “I’ll get a damp cloth” jeers another as they disappeared amongst the trees, their bones rattling obscenely, held together only by sinew and rotting flesh. My strength gives out, I can run no longer. I must be still and face the fury as it sweeps toward me, face it on its own terms. I will become as stone, impervious to the flame and heat, I will stand. I will no longer run.

Moments or eons, I cannot say, yet before me the mists begin to thin, and the heat and flame recede. The tortured limbs of the trees begin to regrow their flesh and skin, their bony arms now lithe and supple. Voices come to me, yet not the voice of fury but the voices of Angels, singing as a choir of forest birds. “You have chosen well Johannes” they tell me, “you have chosen well.”

“He’s coming ‘round” a different voice comments from behind me, as I lay upon the lush green grass of a meadow, pale blue sky above, with puffy white clouds dancing playfully across my vision. Birds and animals gather around me, my family of friends join me, they are safe from the fury. I hear the sounds of weeping and open my eyes once more. “Oh thank God” aunt Edith gasped. “Thank God!”

“Good to see you’ve joined us again” smiled uncle James, tears rolling down his cheeks. And I realized then, the fury could not battle and win against such love. It was gone now, along with the years of torment and fear, a new life opening before me.

Edith pulled the blinds, admitting the bright rays of morning sunshine, bathing me in its golden light. Tears stream down my cheeks as we all three hold each other.

Observer of the human condition, but mostly lover of animals and all things nature.

Writing at last to explore my creative, searching for my real voice.

Read next: Longing for Normal