The Freezing of Walnut Pond

by Bella Blue 9 months ago in Short Story

From here, you can see everything.. 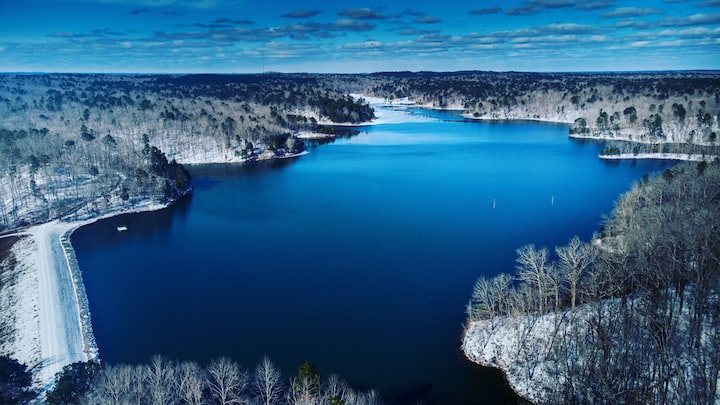 Photo by Bryan Huff on Unsplash

Mayor Wilson was on his fourth drink and second speech , when Kelsey slipped out of the glass double doors and onto the marble balcony , walking right to the edge before exhaling. Her breath formed a cloud of circular smoke. The temperature was below freezing and the moon was casting a light blue glaze on Walnut Pond.

Walnut Pond had been frozen for over a week. From the balcony, the pond appeared to be moving, glistening with small waves, almost alive. She hated Walnut Pond. She hated Wilson Mansion, its columns and staircases, ballroom, and manicured lawn. She hated the 2,139 residents who called Walnut Pond home . She hated the way she felt every time she was obligated to return . She felt her throat close and her eyes water and burn , as if the town knew she was here, and sought to poison her. She couldn’t eat. She couldn’t sleep. The loathing consumed her.

Applause exploded from the inside .The mayor had finished ; Cocktails and music could continue. She inhaled ,feeling an icy stab in her lungs, before exhaling. It was cold. The same relentless, biting cold that embraced Walnut Pond every year.

In the summer months, Walnut Pond became a mountain oasis. Couples honeymooned . Men fished . Kids learned how to swim. The bungalows opened . People had barbeques . Walnut Pond burst with activity. There were concerts and flea markets ; Even the circus came to town.

In autumn, Walnut Pond welcomed thousands of visitors to watch the leaves change colors or pick apples . Evenings ended with campfires to warm the brisk night .

When the trees were bare, so was the town . The visitors left. When the pond froze, it kept everyone imprisoned until the spring thaw. No one escaped the freezing of Walnut Pond.

Others began to occupy the balcony , laughing at liquor induced jokes and commenting on the cold as if it were a surprise . Kelsey stepped near the wall, allowing others to pass, not wanting to be seen.

She turned to leave and ran straight into Mayor Wilson. She wished she could slam him into the wall.

“What in the heck … ?” the mayor slurred his words and almost lost his balance, staggering with clumsy , drunken steps then stopping to regain his composure.

Kelsey kept moving . She would not listen to his words. Not now. Not ever.

Kelsey ran through the ballroom ,down the staircase and into the servant’s side door. Her body melted through the walls as she sped to the kitchen and out into the back yard of the mansion. She slowed down when she reached the stone path which led to the pond . She walked slowly , catching her breath.

The path was illuminated by moonlight. Kelsey walked , until she found the memorial stone that had been placed there so many years ago .

Kristy and Kelsey had met on the first day of kindergarten . They became inseparable ,sharing everything from dolls to missing teeth. They did everything together. They even died together.

Kristy had met Joe Barnes during lunch when they both reached for the same apple. Kristy felt a spark and Joe said softy , “We can share the apple.” Joe Barnes was class valedictorian, and the son of a single mother, who cleaned houses for the wealthy families in town. They lived in the poorer section of town , where the trailer park stood . The land conveniently belonged to Mayor Wilson, as did most of the town’s key properties including the school and hospital.

Mayor Wilson did not approve of his daughter dating Joe Barnes and vehemently forbade it.

Kristy and Kelsey conspired to circumvent the mayor’s direct order.

Kelsey would pick up Kristy from home, drop her off at the arranged meeting spot , then return to drive her back home.

It went well for almost a year, until the one night it came crashing down. One warm night, the school groundskeeper , had returned to campus to turn off the sprinklers and saw Joe and Kristy , holding hands and walking around the track. Hoping to win favor with the mayor , he called him, to report what he had seen . The mayor assured him that his loyalty and his silence would be rewarded .

Two police cars pulled over Joe and Kristy just yards away from the meeting spot where Kelsey was waiting. Kelsey could only watch in horror. Joe was pulled out of the car and the officers started to beat him. Kristy jumped out of the car only to be restrained by another officer.

Kelsey got out of the car , screaming for them to stop. Kristy broke free from the officer’s grasp and ran to Kelsey. Kelsey held her .

A malicious smile spread across the officer’s face.

The girls watched as they shoved a bloody Joe into the car , pushing it off the mountain , into the ravine .

Kristy screamed and Kelsey pulled her into the car .

They drove in silence.

When they arrived, Kelsey would not leave her. She walked with her into the house. Mayor Wilson was waiting for Kristy in the front sitting room. He had not expected Kelsey.

Undeterred , he charged towards Kristy , delivering a powerful backhand across her face, sneering at her “ How dare you disobey me? Who do you think you are?”

The force of the blow sent Kristy reeling. She collapsed near the ornate writing desk that her mother used to send handwritten thank you notes with her engraved stationery.

Kristy could taste the blood in her mouth and felt it stream from her nose. She touched her cut lip and swelling cheek. She started to pull herself up with her blood stained hands, feeling guilty for smudging her mother’s desk.

“Stop !” Kelsey screamed . “Please stop , Sir , please !” She tried to place herself between them.

Kelsey watched as the mayor spoke those venomous words, but she could not believe them . Across the room Kristy had solidified into a human statue , showing no emotion.

Kristy looked at her father. Her father looked back.

Kelsey was trapped between both glares.

Kristy pulled out a gun and aimed it at her father .

“You killed him”, she said evenly.

“Where did you get the gun?” Kelsey asked anxiously.

Kristy stared at her father.

“From the cop who held me , while his buddies killed Joe” she said calmly while keeping her gaze on her father.

“I want to hear him say it .” Kristy said coldly, unlatching the gun’s lock.

“I want to hear him admit it.” She held the gun aimed at her father.

Kelsey looked at the mayor. He was looking at Kristy with disgust . Fear filled her . Something was very wrong . Kelsey tried to stand between them again.

The mayor put his hand inside his jacket pocket.

“Please Kristy, put the gun down, you can sleep at my house tonight” Kelsey coaxed, returning to her side.

“Tonight, I rid myself of the vermin that has plagued me for 18 years” the mayor announced victoriously , before firing his gun at Kristy.

It unfolded in slow motion. She grabbed Kristy to pull her down to the floor but Kristy hadn’t waited for her father, firing her own gun into her temple. Kelsey made a perfect target for the mayor’s bullets.

Kelsey and Kristy fell to the ground together.

The trial was held three days after the first blizzard. Joe Barnes was testifying in his new suit. He walked with a slight limp. The scars on his face were healing nicely after plastic surgery .

It was an election year. The trial was a formality, providing closure for the tragedy.

There had been a series of accidents that evening . First the automobile accident of Joe Barnes that might have been fatal, had the police not acted quickly.

Next the accidental death of two teenagers, who were not expected at home, tripping the alarm, and waking the mayor from a sound sleep . It was terrible that he shot them both thinking it was intruders. No one could blame the poor man . Any reasonable person would have done the same.

Joe Barnes testified that Kristy and Kelsey were willful and disrespectful rebels who enjoyed drugs and alcohol despite the mayor’s best intentions. He had broken up with Kristy that evening. He testified that her dangerous behavior threatened his academics. He did not mention , nor was he asked about the full scholarship to college which the mayor had arranged at his own alma mater.

He would pursue political science, hoping one day to be the mayor of Walnut Pond.

Sandy Barnes sat in the back of the courtroom, watching her son proudly.

She smiled thinking how wonderful it was to see her two men together. All the years of waiting patiently and keeping silent had paid off. Her trailer’s rent was paid in full . Her son had a scholarship . Chester Wilson renewed their relationship, just like when they were teenagers. Of course, just like then , they would keep it secret.

Kelsey stood at the back of the courtroom and screamed but they didn’t hear her .

She moved in front of the jury box demanding “Are you all blind ? He’s lying! What’s wrong with you?”

They didn’t see her.

“Not guilty” the verdict sang through the court room . It was a day of celebration. Every year , on the anniversary of the acquittal the entire town would be invited to celebrate with cocktails and music at the Wilson Mansion. No one was able to refuse the mayor’s request.

Kristy had been quickly cremated before an autopsy could be done. Her ashes buried under the memorial stone. The truth had been buried with her.

Kelsey’s organs were donated . It was Mayor Wilson’s suggestion . The town agreed that Kelsey always helped those in need.

She knelt by the frozen pond and curled up on Kristy’s memorial stone.

“I hate this place”, she cried softly, “it's cold and it's dark, but I’ll never leave you here alone”

On the balcony, a woman pointed towards the pond and remarked that although frozen, it appeared to be moving. The raucous laughter that followed, shamed her into silence. It was decided that she had too much to drink and had not seen anything after all.