The Face of Nameless Things

by Casey Boomhour 6 months ago in Short Story
Report Story

Your name is a gateway to the soul, and she has lost hers. 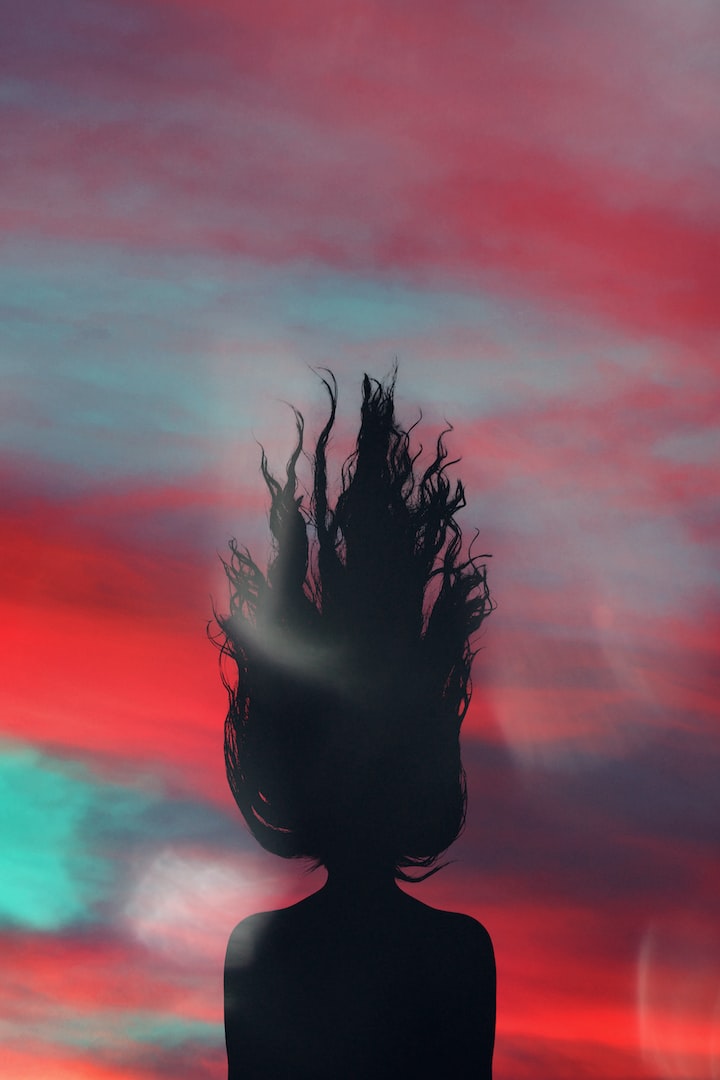 Once, there was a name. A small, flawed thing, riddled with holes like an old sweater too small for an adult’s frame. It was full of false tales and deceptive adventures, crafted to match the heart of a liar. But it had been hers, and hers alone.

That name is gone now, stolen and severed from soul, and now she’s nothing but a collection of barely contained memories. She’ll be unmade soon; it’s not difficult to see the tugging at her heart and picking at her mind, as though her brain’s a knotted ball of string slowly being undone.

The clacking of dry food against a silver dish becomes a white noise to drown out the deafening silence of the green forest beyond. No birds chirping, no cackling crow mocking those who fail to catch it.

There is only a cabin.

Modest, to be sure, crafted of so much fine wood it begs to be put to the torch. Tucked away in the furthest corner of the City, it is far from prying eyes and cruel men. In that cabin there is a dog, mangy and old, sporting patchy fur of black, brown and white, a scar replacing where his left eye should be, and a stump in the spot of what may have once been a tail.

“Good boy,” she smiles, rubbing at the spot between his ears, the feeling unnaturally soft against her calloused hands, as she tucks her coarse white hair behind her ear.

The air’s heavy, weighing on her shoulders as a breeze licks her dark skin. A hiss escapes her as specks of dirt drifting along the wind makes their way into the cracks in her skin. She winces, white eyes narrowing, as she buries a sharpened nail into the fractures filled with an oily black, and digs out each fragment of crud. She has become a shattered mirror, and broken things can only hold themselves together for so long before they fall apart.

“You can stay here,” someone mutters from behind, speaking in sync with the thudding of feet against floor, hope lacing their voice. “Please, just stay.”

“I can’t,” she whispers back her response, refusing to meet the gaze of the woman behind her.

“You don’t have to go. I don’t know much time we have time; I don’t care. I want to spend all of it with you.”

And maybe she could, it isn’t hard to envision. A life here, in a cabin small but warm, homely. But they wouldn’t grow old together, they wouldn’t have decades of laughter, of fighting, of drinking hot tea that burns the top of their mouths while waiting for the sun to rise.

She would stay, she decides, if she were a blameless thing. It would be easier to fault her actions on another if her offenses and crimes were committed in the name of a cause, a lover.

What happens to those who commit heinous actions for the sake of their own name? Who is there to blame, but herself?

“He has my name,” her gaze moves back to the woods, the Inner City beyond. Her voice hardens, hands curling into fists at her sides. “He stole my name.”

“You can’t change the things you did in the past, you can only forgive yourself, and move on. I know there isn’t much time left, but isn’t it better to spend it here, with me?”

She shuts her eyes, locking out the panging in her heart and guilt tugging at her mind.

“I want to,” her voice nearly breaks, “but I can’t. Won’t. I’m getting my name back, my real name, and then I won’t be breaking anymore.”

The woman sighs, she can hear it from behind her, but of course she won’t force her to stay – she loves her too much for that. The nameless girl steps forward, the wood slick beneath her cloth-wrapped feet, lowering herself a step down the porch.

Clenching her teeth, she breathes in deep. There’s only one way this will end, she knows this. For five years, her name’s not been her own, theft and murder were choices she didn’t make. Blackmail and arson and kidnapping enemies she didn’t have with no one to blame but her own name – and one other.

“I love you,” she finally responds.

Without another word, she leaves.

Storming through a forest void of everything but trees, the air of scented pine, long blades of grass cutting into her bare ankles, new blackened cracks forming with each new wound. It pulsates under the spitting skin, reaching into her organs, stretching her muscles. A pain harsh as the sea and dark as the ocean’s end.

The trees curve, parting a pathway towards the Inner City, and the chaos beyond.

She needn’t enter the city to hear the sorrowful pleas and joyful shrieks. To see the burning carriages and rotting taverns, wooden boards peeled from ceilings and water damaged from heavy rain. The people, running to and away, laughing and crying and bleeding, some brandishing knives and others tissues. As she pushes further inward, sidestepping the riots and disarray, her gaze focuses on one building, and one building alone.

It glows amongst the flames, a tower with a roof like knives, built to pierce the clouds. The monstrosity glimmers and shines with its mirrored glass exterior, reflecting all the chaos down below on its walls.

The large set of double doors remain unguarded, as they had been since she had left them. They’re the only visible steel of the building, and she grunts, huffing as she throws herself against one. It’s heavier than she remembers, but opens for her nonetheless.

None of this is as she remembers – a meadow of roses replaced with rivers of blood, the nameless dancing where the children used to. Then again, perception is often deceptive when all you can see is what you are told to.

The halls greet her with nothing but ghosts and haunted memories, muddy footprints soiling the floors and crimson handprints marring the walls. She remembers, once, when they were clean, white and pristine, polished to the point that every surface shined.

She flinches at the word, a numbing buzz filling her mind at the sound of it. White static where a cord binding name and soul used to be, now long since severed.

“Not anymore,” she replies, curling her fists.

He walks down his pretty white staircase, manicured hand on the wooden rail, the once falling hazard of the smooth marble steps now roughened with scratches and holes.

“Have you come for your name?” the Collector asks with a mocking tone, a coy smile playing on his lips. “Oh, foolish child, you must’ve known I can’t grant you that.”

“You stole it from me,” she hisses, spit spewing from her dry lips, heart thundering, any sense of calm ripped away. “It was mine, and you took it! What right did you have, to steal my freedom, to force me to lie for you, kill for you? BY WHAT RIGHT–”

“I took your name, you’re right. But you severed your bond to it, not me. No one can give you that back,” he speaks like addressing a child.

She closes her eyes, only for a moment, and sighs, “I know.”

“You do realize what that means, little one, don’t you?” he’s so close now, only a few steps away. “You won’t die…you’ll disappear. You’re going to keep cracking until there’s nothing left, and you’ll never have existed at all.”

Then, she leaps. In seconds he’s on the floor, gasping, head cracking on that cherished tile, pinned down by a knife at his throat. A single black hair falls out of place – it’s the messiest she’s seen him.

He begins to beg, spilling out a dozen words a sentence, none of which she hears. A small, saddened smile plays on her lips, before she applies pressure down upon knife.

Not so long ago, she would have realized she’s gone too far now. She can’t get her name back; she gave it up to gain her freedom. She’ll die no matter what she does now. Maybe if she runs, she can reach the woman she loves before it all goes away. But he stole what was hers, made her unable to sleep at night or eat during the day.

She should let it go, there’s no changing the past.

Her blade cuts clean, and it’s over.

Sighing, she rocks back on her heels, swaying only just, before her skin begins to break and crack off around the black lines in her flesh. The dead live in the memories of others, through the sweat of their achievements; their bodies turning to soil, but their life forever intact. The problem with never existing is that there’s nothing left to be remembered. Her death will be forever, because she will never have lived at all.

A sole tear rolls down her cheek, resolve fracturing only for a moment as all hopes and possibilities of another future fills her mind. A cabin surrounded by green, brittle bones and greying hair, resting her head on the shoulder of the one she loves. Sitting on a porch, legs resting on the stairs, learning each other’s names.

Maybe she still has time. If she hurries, maybe she can say goodbye. As she gets to her feet, she can feel her legs start to unravel. As she rushes to the door, her hand splinters away. And as her fingers wrap around the door’s handle, there’s no body left at all; only the whisper of ashes where she once stood, scattering in a breeze carried in by the door no one cracked open.

The hint of dust lands on a cabin tucked away in the furthest corner of the City, far from prying eyes and thieving people, inhabited only by two for as long as one can recall.

On the porch there is a hound, mangy and old, a stub for a tail and a scar for an eye. He watches the horizon, waiting for no one, bowl filled with food no one poured.

“Come on inside boy,” a woman calls from where she leans against a doorframe. “It’s getting dark.”

The hound whines, refusing to budge, phantom tail thumping against wooden floorboards, a hole in his heart where the face of a nameless thing used to be.

The woman goes to call the dog again, but pauses at the door, a memory on her tongue, a missing piece in her mind…it melts away as quickly as it appeared. She sighs, eyes meeting a scratch in the porch she doesn’t recall making, a pang of longingness weighing on her shoulders for someone she’s never met. She joins the hound on the steps, a piece of their puzzle missing, and together, they watch the sun fall.

Once, there was a nameless girl.

A daydreaming writer trying for their dream.

More stories from Casey Boomhour and writers in Fiction and other communities.