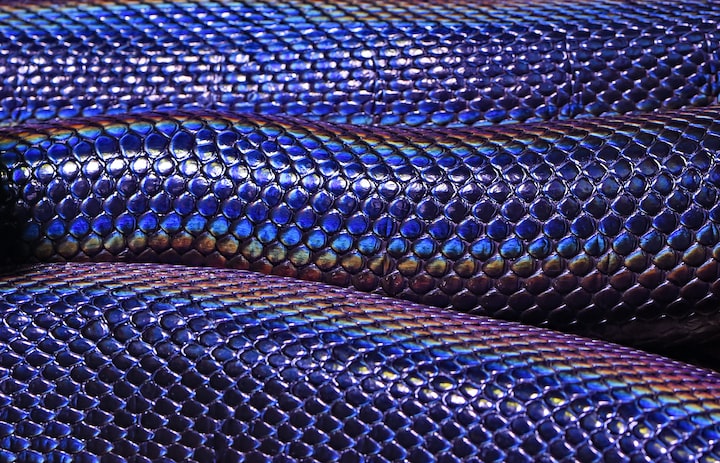 A little girl about twelve years old with long black hair, tan skin, and brown eyes blundered through a cursed forest - Periat Aminas. Vines crept closer to her as she tried to flee the living plants.

Unexpectedly, a hiss sounded from above her head. She gradually raised her head to look up and discover a long blue snake. Its prolonged forked tongue slipped in and out of its mouth as it locked its black eyes on her fretful gaze.

A strange low voice swiftly entered her mind as she froze. "Fret not, child," the smooth voice paused. "I am not going to hurt you. I am one of the few beings here not planning to kill you."

The girl shook with fear as she held the snake's stare. "Why not harm me?" she quizzed with a narrowed glare and furrowed brow.

The snake slowly curled around the branch and held its head near hers. The scales changed colors as they moved. Soon the reptile was all green and adjusted its hues to match and blend in with the surroundings.

"I am an often misunderstood snake. I am not venomous, and I was once a Razi, seeking a family after losing everything to a fire. I was cursed in these woods by a witch that serves Demise. I remain here and try to warn off as many as I can… there are numerous great evils among these trees."

Abruptly a man's horrified shriek erupted in the distance. The blood-curdling scream sent chills throughout her body as she shook with fear.

"What was that?" she curtly questioned.

The snake bobbed its head as it slithered closer. "That was most likely another victim to a cornicapus widow."

"A what?" she demanded with wide eyes.

"We need to get away, a few of them hunt these woods and prey on those who wander."

The snake dropped down to the ground and shifted its scales to return to sapphire shades.

"There are ways out of here that are sometimes misleading, thus why many get lost here. It's always changing because it is alive. It loves to create illusions and feed on the energy that the souls here express. It plays mind games with those who come here," the wise creature stopped as it faced her. "This is too dangerous of a place for a young girl like yourself." The snake turned and commenced to slither away.

As the snake led the way, she jumped when she noticed hundreds of tiny spiders darting in the same direction.

"I can feel your anxiety; please, relax. I assure you, they won't harm you either. Not all spiders are evil, and not all snakes. It's a shame that some are cruel and threatening, so aggressive they give the rest of us a bad appeal. A common misconception I never understood myself until I was cursed…"

"Why help me?" the girl asked with a tilted head as she hesitated to follow the snake and slim spiders.

"I don't have a life anymore like I once did, so I try to help save some souls, so they don't suffer like me. Those who have been cursed and tormented, and those who have been eaten… Some cruel souls deserve it, but you are among the few that don't. I can lead you back to the edge of this wicked place. You must not return - ever - please."

"Maybe someone could help you. Maybe the Enchantress or Enchanter can lift the curse."

The snake paused but soon carried on its way. "I can't leave here. Even if they were here, I doubt they'd be able to lift it."

"Where's the witch that cursed you? Maybe - "

"She would never lift it without something precious in exchange."

"Well, many curses fail after the caster is dead, maybe when she dies - "

"She is most likely immortal. I appreciate your ideas, but I think the only way it will end is if she is killed. I'm not sure…" the snake paused. "I assume so since many in history ended through the death of the curse-caster… why, though?"

"Well, maybe I could help you…" The little girl hesitated. "In return for your help, I must offer something of value to you." the girl smiled. "I can ask some great warriors from my land; they're brave and powerful!"

The snake stopped to face the little girl. Their gazes locked, and she could feel his presence in her head. Promptly the world was dark, and before her stood a man in sand-covered clothes wrapped around his toned body. He was an adventurer from the desert, wearing similar attire that her peers wore.

"You came from the desert, like me, didn't you?" He asked with a low voice. Gradually he dropped the cloth around his face. He was tan with a chiseled jawline and robust facial features. His deep brown eyes glistened with a handsome spark.

Scruffy dark facial hair sprouted from his chin and jawline. His messy dark hair reached his ears. The twelve-year-old gasped as she became overwhelmed with sheer shock.

"What is your name?" the young girl asked.

The man wavered as he gazed at the floor. "My name is Ridis Drac. In the tongue of my people, it means Chaos Dragon."

The girl tilted her head to the side. "So, you dress like the gypsies I live with, but you're an Invi? You're descended from a survivor, so you've been trying to hide your identity your entire life, haven't you? I don't think they're hunting for Invis anymore, but - "

Ridis shook his head. "I do not fear The Flarein Family - it is Blaze, my ancestor, that I have been hiding from…" he confessed.

"Why?" she questioned, her face twisted in confusion.

"Blaze has been manipulating chaos in the world ever since my father was born. Blaze planned to have my father push his children to serve Blaze and become pawns of his sick war game with Flare. For generations, those two have been using their flesh and blood for power and leverage. They can't be trusted."

Ridis paused. "The strange positives to being a cursed snake is that I am not much use to him anymore and I'm not as easy to track down. Ever since she cast her spell, I have not been bothered by him nearly as often as before. Because of him and Demise, my family has been ripped apart."

"I'm sorry for what they've done… I know you have come to accept that, but maybe there's a way to be free. Maybe you could find your family. There are many different options we could try," the girl proposed.

"I'm not so sure how that would help."

The young gal frowned as she held his uncertain gaze. "Family is important. Toxic love isn't healthy, but if there's real love deep within, it will always keep a strong bond between those who love you. They might think you've been dead this whole time. I'm sure they'd be so excited to see you!"

He chuckled. "Or terrified, they might try to destroy me thinking I'm a deadhead."

"Nonsense," she grinned. "They'll be happy to see you again finally. You decide whatever you want, but I'm willing to help you with it. Lifting the curse, finding your family - you have so many adventures beyond this place!" she pressed. Her beautiful brown eyes shimmered with hope as she beamed with excitement.

The man nodded as a slight smirk curled across his lips. "Blaze will have more reason again to bother me if I regain my true form. I guess he doesn't need snakes," his laugh was soon followed by a frown. "However, the possibility of seeing my family again could make it worth it."

She nodded with a grin. "As soon as I return to my people, I'll come back with help to free you from the curse."

The man dipped his head as he took a step back. "We'll be out of Periat Animas soon. Stay careful, milady," he reported as he bowed to her. Abruptly the world opened up before her again and she walked through the dark woodland.

Ridis continued slithering in front of her as he guided her away from danger. His scales started shifting colors to blend in as he crossed various hues of undergrowth. Spiders crawled along beside them as they approached a growing light peering through the tree line.

"Promise me you won't go looking for the witch alone if they can't or won't help," his voice demanded in her mind as she froze. "Please, Helenora."

Helenora was stunned that he knew her name. "How did you - ?"

A chuckle erupted from Ridis in her head. "Your mind is an open book. Maybe I can teach you how to block out intruders."

Helenora raised an elegant eyebrow as she crossed her arms and grinned. "I would appreciate that."

Please consider liking, sharing, subscribing, pledging, and tipping if you liked what you read! Thank you for reading! :D