Music and words: While reading please listen to "She's The One" by Monsta X. 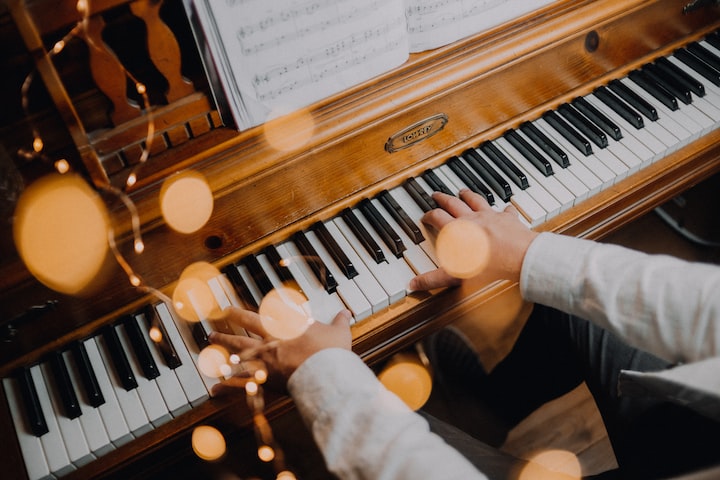 Photo by Isaac Martin on Unsplash

His fingers danced across the keys of the bar piano. The dust rose and fell in the rising sun. His mind clouded with thoughts of the strawberry blonde who sat at a table under the fading picture of the Eiffel Tower. The paint had begun to chip away and flack onto the bar floor.

He’s written songs to accompany the strawberry blonde's laugh, another for the skirt of her red dress to dance to, and one more to illuminate the color of her kaleidoscope eyes. She’s clueless about each one.

“Honey.” Rose had hummed his name, as she leaned in to request a song. Her eyes sparkled with her smile. She knew she had him looped around her finger. She spun away beaming, eyes from nearby tables venturing after her. She knew all eyes were on her.

Honey made her a song on the spot. In his eyes she had stepped into the Paris painting, dancing under the twinkling lights of the tower. She took his hand and pulled him in closer. His chapped lips almost touched her smooth ones, as her hand slid along his arm. She reached behind him and effortlessly tugged one of the dozens of roses from behind his back. The thorns twisted between her delicate fingers, not daring to tear the skin. He reached to touch her cheek as a petal fell, the words he wanted to say threatened to escape from his lips.

His eyes shot open, and he was back in the dusty bar. His only company was another employee slinging a mop across the floor with a sticky splash. Honey stood on shaky legs, Rose still vivid in his mind. His knees buckled, and he gripped the edge of the piano. The glass of watered-down scotch rattled near his hand. He let the cooling condensation coat his fingertips. Hours before the taste had taken over his tongue when Rose brought him the drink with an innocent wink. It inspired his next chorus.

He retired to his room upstairs and stared at the ceiling with tired eyes. He should eat, but his fridge had been empty for days. He wasn't hungry. He could sleep, but he didn’t want to dream if it wasn’t about her. He wasn't tired. He wanted to scream, scream at the top of his lungs that she’s the one, but Rose would never hear him.

He tossed onto his side and buried his face in a pillow. He pieced her back together in his mind. She wore vibrant white shoes. Her skin was smooth and milky. Finally, her freckled nose, and that’s how his fingers glid over the bridge.

He went through the motions, thinking about her light giggle when their hands brush as they reached for the same glass. He thought about how she bit her lip and glanced up when she was pondering something. If they sat close enough she'd pick the imaginary fuzz from his dark sweater, or brush the falling strands of black hair back passed his forehead.

He sat back down at the piano and waited for her figure to glide in. He memorized asking her how her day was like he memorized sheet music. The words were notes passing his lips. But, as soon as Rose was in front of him he knew the words would get caught on his tongue.

She walked in, her white sneakers scuffing the floor, strawberry curls pulled back, two single ringlets framed her face tapering from her bangs. Her eyes smiled before her lips as they settle on Honey across the room. She held up a finger, and his gaze followed as he lazily let his fingers fall on the keys. The notes matched her steps.

He watched as she poured the scotch from a bottle, the golden liquid settling in the bottom of the glass. It crescendoed to his eyes.

Rose walked over and placed the glass on the worn ring in the wood from the damp glasses before it. Honey slid down on the bench as she sat next to him. She smelled like lavender mixed with vanilla chapstick. Her eyes fell to the keys, and her long lashes brushed her cheeks. It was like an electric shock when she laid her fingers over his to press the keys.

“You need to teach me to play.” Her voice was a low alto, spreading warmth across his cheeks as she glanced up. His dark orbs caught hers, and he felt the corner of his lips quirk into a smile. “Promise?”

Honey didn’t make promises, but he was sure she felt his heartbeat on his shirt sleeve, and he found himself nodding because she had stolen the words from his mouth.

“After close then?” All he could do was nod again, and watch the breathtaking smile as it broke across her face.

He decided that was the beginning of the final arrangement, as she walked away to serve drinks to the venturing eyes of nearby tables.

His fingers glid across the keys, effortlessly, as each note rang out. Each one was a different tone in his heart.

Because she’s the one.

Sometimes it feels like the only aspect I have control over are my words. When I write it's an expression of myself many others have not seen. I want people to be able to see it. I'm hoping to find a community to share my words with.

More stories from Madyson M. and writers in Fiction and other communities.