by Nicholas Kleinhenz 11 months ago in Short Story
Report Story

Reader discretion advised: I wrote this to raise awareness about the practice of finning, which is still an ongoing practice in some countries even though it has been outlawed by most others. 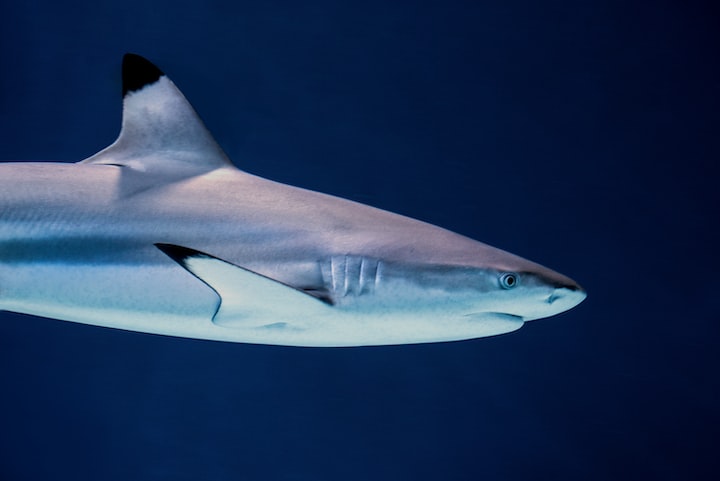 “You will not escape your karma.” said the gypsy as Gerald stormed out of her small, musty shop. “I will be sure to see this through to the end.”

As the door swung closed, Gerald could hear her the old woman chanting something in a different language. Crazy old hag! he thought as he walked down the street with his hands shoved deep into his pockets. He passed by a few more shops and another woman stopped him.

“Sir, excuse me, but I think you’ve been cursed. You see . . . I’m clairvoyant and I can understand things like this better than most people.”

“Oh, so that’s your little game?” Gerald asked sarcastically. “Look, I don’t have the time or the money to waste on your magical curse cure that your partner back there put on me.”

“Partner?” the lady asked. She was clearly befuddled by this. “What partner?”

Gerald scoffed at what he assumed to be her feigning ignorance. “You know who I’m talking about – the old gypsy lady.”

The lady’s eyes abruptly widened. “The one in the shop back there?” she asked as she pointed down the street.

“Of course!” Gerald exclaimed. He was becoming more agitated with the lady as their conversation continued.

“I’m sorry,” the lady said as she broke eye contact. Her entire demeanor changed. “I can’t help you.”

As the lady turned and walked away, Gerald shouted, “That’s because I figured out that you’re both quacks!”

The lady did not respond and continued on her path across the street.

“Who let the loons out of the loony bin today?” Gerald chuckled to himself. “Oh well, I leave for vacation in the morning. I’ll be out of this town for five whole days with Sarah and the kids.”

Gerald awoke the next morning from a miserable night’s sleep. He had been plagued with oceanic nightmares all throughout the night, but could not remember the details. The only part of the nightmares that he could recollect was swimming through the deep blue waters. Sarah had already gotten up a few hours beforehand and packed all of their bags for the trip. The family boarded a plane and arrived at their destination, Daytona Beach, a few hours later. Gerald began to feel nauseous as the family carried their bags up to the hotel room.

“I cannot wait to get a tan!” Sarah exclaimed as she walked out of the bathroom in her pink bikini top and black shorts. She had already changed the kids and everyone was ready to go except for Gerald.

“I’ll meet you guys down there.” Gerald said. He had been laying on the bed ever since they arrived at the hotel room. “I’ve got a migraine.”

“Are you alright?” Sarah asked.

“Yeah,” he replied. “take Tina and Alex to the beach and I’ll come down in a little while. I’m just feeling a little nauseous from the plane ride.”

“Alright, let’s let daddy get some rest so he can come have some fun with us later.”

Sarah and the children left the hotel room. Gerald closed his eyes and felt dizzy. “What is going on?” Suddenly, he became insatiably hungry and got out of bed to raid the hotel mini bar. The gluttonous gurgle in his stomach was not satisfied after eating everything in the mini bar, so he decided to walk down to the hotel café and order two sandwiches. Feeling somewhat better after eating an obscene amount of food, he joined Sarah and the kids at the beach. He found them standing at the edge of a low pier peering down into the water below.

“What’re we looking at?” Gerald asked his family.

“Just watching the waves,” Sarah said with a gentle smile. “Are you feeling better, dear?”

“Daddy, the ocean is so cool!” Alex shouted. Neither he nor his younger sister had ever seen the ocean.

“Let’s go down to the beach.” Sarah suggested.

Gerald stepped toward the edge of the pier. “Watch this, Tina.” He bent his knees and pushed off, diving headfirst into the water with a splash.

Alex and Tina both started clapping and shouting proudly. Sarah grinned at her husband’s willingness to impress the kids. However, after a few moments passed, Gerald did not return to the surface. Sarah began to worry and she called for a lifeguard. The lifeguard dove in and searched for Gerald, but didn’t find him. It was as if he had just disappeared.

I didn’t know I could hold my breath this long. Gerald thought to himself as he swam around beneath the pier. I wonder how far out I can go before I have to surface. Gerald swam far past the end of the pier and turned around to look back. I still don’t feel like I need to go back up for air. Something isn’t right about this. He swam up toward the surface and skimmed along the waves like an Olympic swimmer. Suddenly, everyone on the beach began to panic. The people in the water were shouting and frantically swimming toward the beach. Gerald did not understand his predicament until he was able to hear them shouting the word “shark.”

Gerald, suddenly panicking as well, turned and swam away quickly. He swam far beyond the sand bar and out toward a small coral reef. Alright, Gerald, stay calm, he thought. This must be a dream. Yeah, that’s it! I fell asleep in the hotel room and I’m dreaming. I just need to wake myself up somehow. The insatiable hunger returned and he looked around for food. Sharks eat fish, so I should eat some fish. As he approached the nearest school of fish, they all scattered in different directions. Gerald got discouraged, but decided to try again. Having the same result, he decided to search for some slower prey. Gerald couldn’t find any fish that he could easily catch near the beach, so he decided to swim into deeper waters.

Gerald swam alone with his thoughts for what felt like an eternity. Maybe this isn’t a dream. Maybe this is because of the gypsy’s curse. No, that sounds crazy. I’m beginning to lose my mind out here. If I don’t find something to eat soon, I’m going to starve to death. He began frantically charging at every school of fish he saw until he finally caught one in his jaws. It didn’t have much taste to him, but he thought little of it. He was able to gobble up a few more fish before they all disappeared into the vast blue world around him.

Gerald kept swimming out to sea because, the way he saw it, he had nothing better to do. He dove as deep as he could, but the pressure became too great and he had to swim back to the surface. At this point, the fish were nearly as large as him. I wonder what kind of shark I am. Definitely not a Great White. Maybe I’m a Mako shark. Mako sharks are known for their speed and I feel like I’m swimming really fast. I wonder how Sarah and the kids are doing? They’re probably really worried right about now. Just then another thought crossed his mind. I got so wrapped up in swimming out to sea that I didn’t realize that I may not be the predator out here. He turned to swim back toward the beach, but everything around him looked the same.

In hopes that he would reach some sort of land mass, Gerald began swimming in a straight line. Unbeknownst to him, however, he was swimming farther into the Atlantic Ocean. Gerald became disoriented and dizzy from hunger. He then noticed a faint, delectable scent coming from nearby – the scent of blood in the water. Gerald thought that this could be a sign of wounded prey which he could easily feast upon. He swam directly toward the scent as its allure began to overpower him. It sent him into a frenzied state of mind where he could think of nothing other than sinking his teeth into whatever bloody mass he found at the end of the scent trail.

Gerald did not notice the net. He was wrapped up in it before he even knew what had happened. He began to thrash around wildly to no avail. Gerald was trapped. As the net was being raised out of the water, he kept thrashing trying to break free. Gerald now understood the old saying about a fish out of water all too well. As the enormous net was lowered onto the deck, one of the fishermen shouted “shark” and the rest came over to take a look.

“What’s a Black Tip Reef Shark doing all the way out here?” one of the crew members asked.

“Not sure,” another replied. “must’ve gotten lost or something.”

“Cut the fins off and throw it back in the water for chum.” said the man who had finally joined them. “the only parts of sharks we keep are the fins.”

Gerald began to thrash wildly, but the crewmen held him down and began removing his fins one-by-one. The captain was right. Gerald felt no pain – only despair filled his mind as he was tossed overboard and left to sink into the briny deep.

Gerald’s final thought as his vision faded to black was: I wish this nightmare would end; I want to go home.