The crisis at Midtown Mall would change the world forever 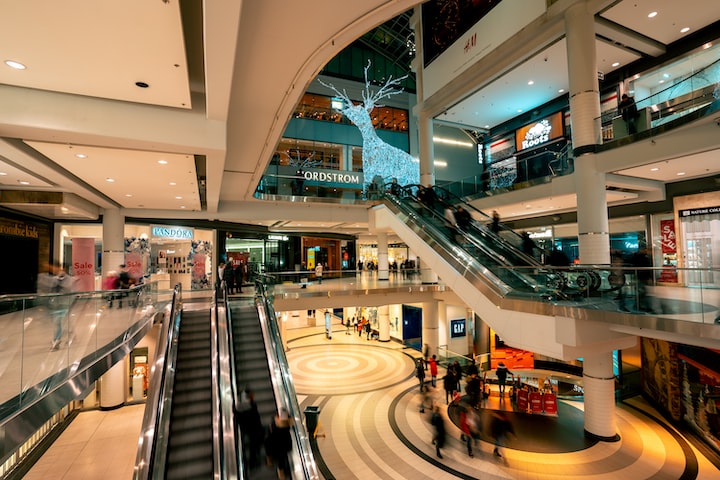 Photo by Sunyu Kim on Unsplash

A small box, neatly wrapped in brown paper, sat on a bench in front of the fountain in Midtown Mall. Kendra watched a man get up and leave it behind. She had watched this same man place it on the bench beside him while he enjoyed an ice cream cone. As the crowd of people bustled past, she watched a woman in a red dress approach the package and pick it up. The woman in the red dress examined the box carefully. Kendra tapped her best friend, Chelsea, on the shoulder and pointed in the woman’s direction.

“Do you see that?” Kendra asked as she directed Chelsea’s attention.

“That woman picked up a box that some dude left.”

“No,” Kendra said with a perplexed look on her face. “but I think maybe we should tell Mall Security.”

“You’re probably over-reacting again.” Chelsea said as she finished the last bite of her salad. “Remember when you told Mall Security about that guy that was stalking you in the lingerie store? He was shopping for something for his wife and you were the one stalking him.”

“I have a bad feeling about that woman though. I can feel it in my gut.”

“Your ‘gut feelings’ are always wrong. Just relax and try to have some fun. There are only three days left of summer vacation and I don’t want to spend them worrying about things that aren’t our business. Now, come on, we’ve got shops to hit.”

The girls got up from their table at the Food Court, threw their trash away, and began to walk toward the nearest clothing store when a cacophony of terrified screams erupted from behind them. A man wearing a black suit walked swiftly by them through the crowd of people, nearly knocking Chelsea to the ground. Nosy onlookers were pouring out of nearby shops and drifting toward the scene.

“Kendra, what’s going on?” said a voice coming from behind them in the oncoming wave of people. Kendra and Chelsea turned around to see their classmate, Charlie, as he was approaching them.

“No idea,” Kendra said. “but we saw something strange at the Food Court right before we left.”

“I want to stay and check this out.” Charlie said as he continued to follow the crowd. “You girls be safe, okay?”

“Yeah, you too!” Kendra called back as she hurried to catch up with Chelsea.

The couple hurried toward the nearest Midtown Mall exit, but arrived as a security guard was pulling the shutters down over the doors. Another man dressed in a black suit was standing in front of the exit blocking their escape.

“Sorry, ladies, due to the commotion at the Food Court this shopping mall is being placed under quarantine until we can get it sorted out.” the man in black announced as he stepped back behind the closing barricade.

“Why are you closing the mall with us inside?” Chelsea asked abruptly. Kendra looked over at her and saw a look of pure terror on her face.

The security guard looked at them reluctantly as the shutter reached the floor. He began walking away, but Chelsea grabbed his arm. “You know something, don’t you? Please tell us what’s going on. I’m scared!” The security guard yanked his arm away from her and continued walking. “Don’t ignore me!” Chelsea called after him.

“Those men are F.B.I. and this is way above my pay grade. All I know is that they ordered us to shut the mall down with everyone inside. There was nothing else I could do about it.”

“Let’s go talk to that guy that was in the Food Court. Maybe he will tell us what’s going on.” Kendra suggested.

Kendra and Chelsea walked back to the Food Court and pushed their way through the growing crowd of people. When they finally reached the center of the group, they saw a man in a black suit knelt over the lady wearing the red dress. He was swabbing her mouth and nose and she appeared to be unconscious. Kendra got a bad feeling in her gut which told her that the lady in red was actually dead. The F.B.I. agent stood up and walked away as the crowd parted. He tapped the radio receiver in his ear and said, “Send a HAZMAT team in to collect the body for further samples. I want a full autopsy and answers within the hour. Yes, I’ve been exposed and so has everyone else in the mall. Continue quarantine procedure until advised otherwise. Yes, I’ll brief them. Better safe than sorry.” The man tapped his receiver again to end communications. He stepped onto the elevated platform around the fountain and cleared his throat. “Everyone listen up!” he shouted in an authoritative tone. “This shopping mall has been quarantined due to a presumed terrorist attack.” Quiet chatter broke out in the crowd. “I am F.B.I. Agent Spencer Walker and I assure you that we are all going to make it out of this safely. Our intel suggests that this is a variant of anthrax, but we cannot be sure at this time. Everyone needs to stay hydrated and report any symptoms that occur directly to me. I am the only agent that stayed inside to investigate. I will answer your questions to the best of my ability, but rest assured that I exposed myself in order to do this.” The crowd began to shout questions once he paused. “I cannot answer any questions at this time. I have no more information to provide. If you’ll all please form a line around the Food Court so that I can verify your identification, we will begin to narrow down the list of suspects. We will get through this with the help of Mall Security, HAZMAT, and S.W.A.T., as well as the local and state police, who are all on standby outside. There is no real cause for concern.”

“Me too.” Charlie said from behind them. Chelsea, startled, turned around and slugged him on the shoulder.

“You can’t just pop up and scare me like that, Charlie,” she scolded. “this is already scary enough!”

The crowd formed into an awkward line around the Food Court as two men wearing HAZMAT protective suits and carrying a stretcher came to collect the body. They zipped the body up in a body bag, loaded it, and carried it out. Agent Walker began checking people’s ID’s at the front of the line across his earpiece. Kendra approached him cautiously. “Excuse me, Sir.”

“I cannot answer any questions at this time.” Agent Walker replied coldly.

“It’s more of a suggestion. Couldn’t you collect our IDs and pass them through the mall gates for the police to verify? It wouldn’t take very long at all if multiple people are working on it.”

“That’s a very helpful suggestion.” he tapped his device and asked for HAZMAT to come collect and decontaminate the IDs before redistributing them to the local and state police for background checks. “Yes, I’ll make sure their pictures match their faces as I collect them.”

Kendra, Chelsea, and Charlie willingly handed over their driver’s licenses.

A few moments after Agent Walker delivered the plastic shopping bag full of IDs to one of the agents outside, he rejoined the group with an unfortunate update on their situation. The agent outside had told Agent Walker to give an update that what they thought was a variant of anthrax turned out to be something “unidentifiable at this time.” As Agent Walker gave the update, people in the crowd began to panic.

“We have to find a way out of here,” Chelsea whispered to her friends. Charlie nodded in agreement. “but how do we get out without them noticing?”

“What if we’re already infected? Anthrax is airborne and they thought it was like anthrax. Not to mention that lady in the red dress died almost as soon as she opened that box.”

“Kendra, don’t be silly, none of us were in the area. I’m sure we’re fine.” Chelsea said.

Chelsea’s face became flustered. As she was about to spout off with a smart-ass retort, a man in the crowd nearby fell to his knees and began having a seizure. The man’s wife began screaming for someone to help him. Another woman rushed to his aid claiming that she was a nurse. Others in the crowd began to collapse. Agent Walker stood atop the fountain ledge and reported what was happening to the outside world as even more people began to collapse. The crowd was sent into a frenzy and began to scatter in all different directions. Kendra overheard Agent Walker report that mass chaos had ensued and the incubation period of the virus was over. His next words startled her: “We are out of time.”

“Alright, let’s go,” Kendra said calmly. “there’s a maintenance corridor that should have a doorway down to the sewer pipe beneath the mall.” Luckily, due to the chaos that had ensued, they were able to reach the maintenance corridor unnoticed. Their escape was imminent.

Outside the mall, the local and state police had blockaded the large parking lot so that no vehicles could enter or exit. They watched helplessly from the outside as the people inside suffered. The F.B.I. had issued a full quarantine order until the C.D.C. provided an analysis of the situation. One member of the HAZMAT team had been on the phone with the C.D.C since they had arrived on the scene. She was startled when the zipped-up body bag on the table in their HAZMAT truck began to move. As she reached to open it, another HAZMAT team member, the one who had done an autopsy on the body, stopped her. Nearly four hours after the lady in the red dress opened the mysterious box wrapped in brown paper, her body began to move again.

“Dear God,” Agent Walker exclaimed when this report came over the radio. He looked around at the bodies laying on the ground in front of the fountain. “we’re all doomed.”

Nearly an hour later, the hopeful onlookers outside Midtown Mall were able to see hundreds of figures pressed against the metal gates inside the mall entrances. The reanimated corpses were reaching through the metal gates; reaching for their next meal.