Pieces of a Bouquet

by Jessica Mathews 11 months ago in Love
Report Story

And Pieces of Life 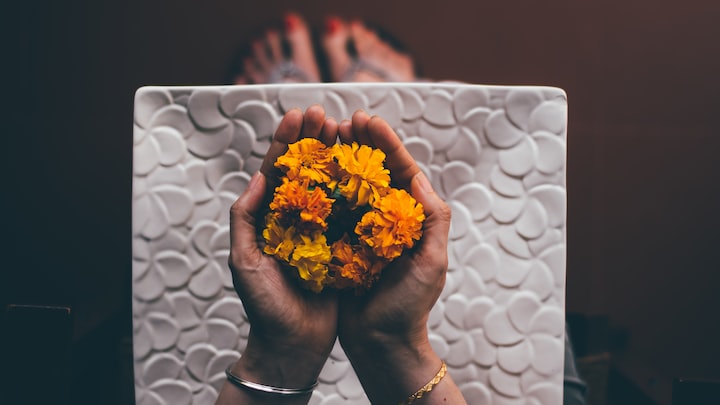 Abby Forrester scrubs last night’s spaghetti off her white plate. She has a dishwasher, but she doesn’t think it gets dishes clean enough. She glanced at her Emerald-cut wedding band on a towel of the edge of the sink. It’s four o’clock- Masen will be home anytime. Abby and Mason have been married six years, but it still feels like perfection. Abby moves on to the glasses while singing “Have You Ever Seen the Rain” by Creedence Clearwater Revival when a bouquet of flowers gently whips in front of her face.

“Oh Mase,” she says sweetly. “They’re stunning, but why flowers? It isn’t a special occasion”

Masen smiles and says, “I was sitting in a meeting today, and I couldn’t stop thinking about your skin and your lips.” He brushes her bottom lip with his fingers.

Abby spins around, wraps her arms around Masen, and kisses him as they move toward the living room.

An hour later, they hold each other naked in the living room floor under a soft, blue blanket. Masen sits up on his elbow and says, “I don’t understand flowers.” They smell weird and some of them are ugly.”

Abby laughs, “which ones?”

Mason scrunches his nose and answers, “Roses are overrated. Those droopy ones look like they were hit by a lawnmower. Those yellow ones look like weeds.”

Abby says, “Well, every flower can’t be the best. They’re pieces that make up a perfect bouquet.” “Every flower is like a piece of a life bouquet. Roses are like jobs; monotonous and everyone has them. Orchids, or the droopy ones, are bad days, but they give you dimension. Marigolds are like your death. They are a part of life and a sacrifice.”

They laughed about flower metaphors into the night.

A week later, Abby was gone. She never came home from work. Masen was frantic, pacing, crying, and yelling at the police officers. He hardly ate or slept. Masen’s once bright eyes were dull and empty. Darkness circled underneath them. Three officers had come to his house to ask more questions.

“Are you sure there isn’t anyone who would want to hurt Abby?”

Masen frustrated with this repetitive question snapped, “no!”

The officers’ radios began to static and transmit a message from the station. “Masen wasn’t really listening, but when he heard, “we may have an ID on the Forrester girl in the field east of Highway 6 and Martin Road,” he darted out the door and took off in his truck.

He made it to the field in a matter of minutes, and he ran as fast as he could to the crowd of detectives, officers, and police tape.

Two officers blocked him from the scene; one said, “Sir, you can’t be here right now; we are still gathering evidence.”

Masen didn’t care. He frantically pushed through them. He saw her. Abby’s ashy blonde hair spread across the field of marigolds. He made his eyes move down, and then he saw her face. He screamed so intensely, the muscles in his throat tried to push through his skin. His face turned red. The officers tried to restrain him, but he could not be calmed. His lovely Abby, pale and stiff on the ground was dead. Her floral blouse and pencil skirt were torn. She had dried blood on her hands and face. More blood soaked her clothes. There were cuts on her face and limbs. Parts of her body were missing- her eyes, heart, and spine. The empty spaces of her body, dark and bloody, changed Masen. He felt his pain change to ferocity toward the people who did this then back to pain. As he sat in the golden field, he watched them take her away. She was not Abby anymore. She was shapeless death which resembled Abby. She was a piece of Abby’s life and Masen’s sacrifice. Abby was his life, and he lost her forever.