by Mikayla Babin about a month ago in Short Story 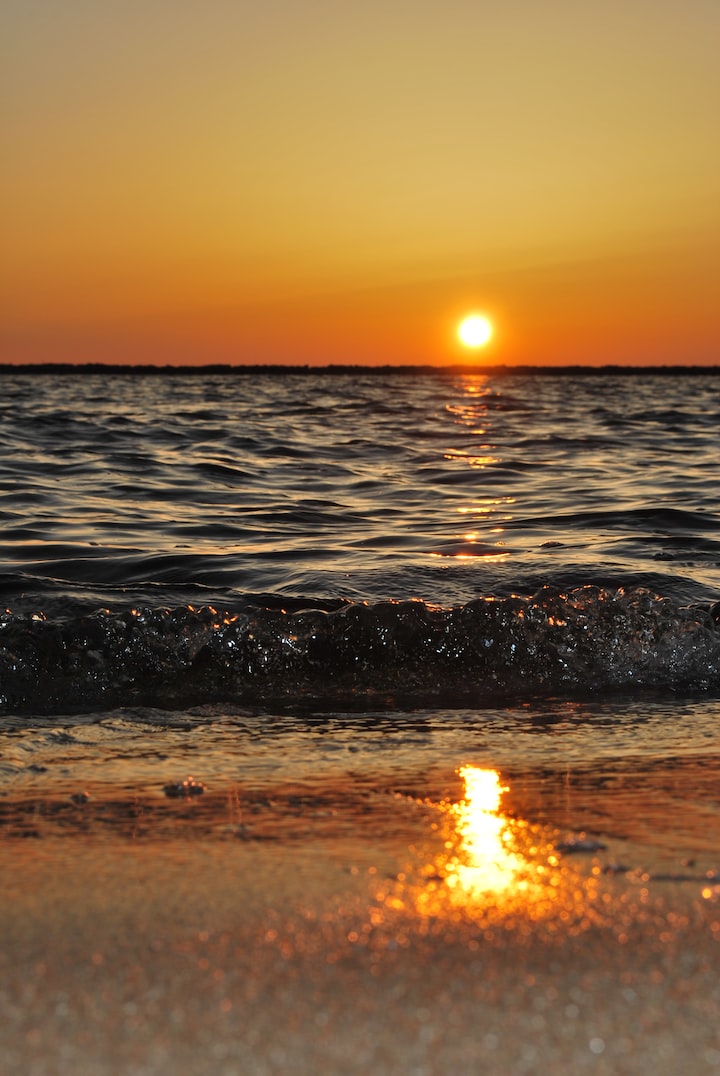 Photo by Rachel Cook on Unsplash

Robert breathed out steadily, filling the air with swirling mist. The wrinkles around his eyes settled into a familiar pattern as he smiled contentedly; the crisp morning was filled with promise. They were perched on a worn bench atop a grassy bluff. Far below and away, the sea met the sky in a reflective mirror of orange and pink. Still morning air smoothed the waves. Breathing in once more, his nose was filled with the scents of eucalyptus and salt, with an undercurrent of morning glory. They’d been coming up here since she was so young that he had to carry her. He never minded though- she was his light in the darkness.

A persistent beeping brought Robert back from the ocean of his memories. Grace was fiddling with the machine again, trying to quell the sound, muttering to herself in frustration. Fumbling with the mass of cords and tubing, she at last managed to restore a tranquil silence. Placing his weathered hand on hers, he met her worried eyes.

“You always were a fussy one, weren’t you?” his words were teasing, but his tone was loving. Her eyes softened as she settled back into her seat, pulling a blanket close against the chilly breeze.

“I just want things to be perfect today,” Grace protested gently, with a small smile.

He smiled back understandingly, as they both looked back out over the gorgeous sight in front of them. The sun had just slipped above the horizon and streaked the clouds with tendrils of golden light. He felt peace in this moment, with his daughter beside him in a place where they had shared so many hours together.

It hadn’t always been easy. Her mother had died when Grace was only 10 years old in a car crash, leaving their already small family adrift in the world without anything to ground them. Faced with a lonely, introverted child, Robert had quickly discovered that the only way to bring her out of her shell was to hoist her onto his shoulders and take her on an adventure. Walking along the main street of the village, he’d take long strides and point out flowers along the way. Grace would gradually warm up to this running narrative, letting out oohs and aahs at the rainbow of colours, kicking her little feet in delight. After reaching the outskirts of their small village, he would turn away from the sea and start on the long, winding cobblestone path up to a nearby bluff. He would spin her long, intricate tales of the lives of the sea creatures below them, even giving each of them names and distinct voices of their own. Chin resting on the top of his head, she would listen intently and stare dreamily out to sea. Once they reached the top of the cliff, Robert would lift her from his shoulders with a flourish and deliver her to the ground with a Ta-da! The next hour or so would be spent eating ham and pickle sandwiches from his backpack, huddled together on the bench sharing a patchwork blanket his wife had knitted, watching a new day dawn.

Looking over at Grace now, he saw that she was struggling to keep her eyes open. Her skin was pale and her breathing shallow; Death had come at last to stake his claim. Robert reached over and tenderly brushed a tendril of hair from her face. Her eyes opened once more, and wearily she said, “I’ve always loved our time together.”

“You have filled my life with so much light and joy,” he said, with a wavering voice, “When your mother was taken, I had no idea what I was going to do.”

Robert thought back to the same time last year. Grace had been living back at home for a few months by then, years after leaving the first time for university. She had been left with no choice but to postpone her dream of becoming an archaeologist, as she had grown gradually too weak to attend classes, let alone travel to historical dig sites. It started with a general sense of fatigue that she had at first attributed to her heavy course load. However, as time went on, most mornings brought with them a migraine and scatterings of bruises blossoming across her limbs; Grace reluctantly decided to seek a second opinion.

Life with her father in her 20s was at once greatly familiar and vastly different to the memories she had of her childhood. He had always doted on her, but now his paternal affections were tainted by anger and a deep background melancholy that seemed to pervade their every interaction. Grace had heard him, late at night, slipping quietly out the front door of the house to stand in the yard, staring motionless up at the night sky. Their lives now were much more complicated. Weeks would have passed by in a whirl of endless medical appointments and routines, were it not for their weekly adventures up to their oceanside oasis. Of course, Robert could not carry her on his shoulders any longer, but they were just as content to walk along together in the early morning twilight, side by side. As the months wore on though and her illness strengthened its grasp on her body, Grace was forced to transition to a wheelchair.

Now she was almost out of time. The doctor, who had until now remained largely positive about her prospects, entered the room at her last appointment with an air of defeat. Grace’s vision had greyed at the edges as he began to detail her remaining weeks, days, and minutes. She remembered glancing over at her father, watching him lean forward in his seat and clutch the armrests until his knuckles turned white. He was still searching desperately for a way to save her.

She turned her head again now, gazing for the last time at a familiar and precious sight; her father’s face lit up by a rising sun.

Written in response to a prompt on ReedsyPrompts; 'Begin your story with somebody watching the sunrise, or sunset.'

Visit the site at- https://blog.reedsy.com/creative-writing-prompts/