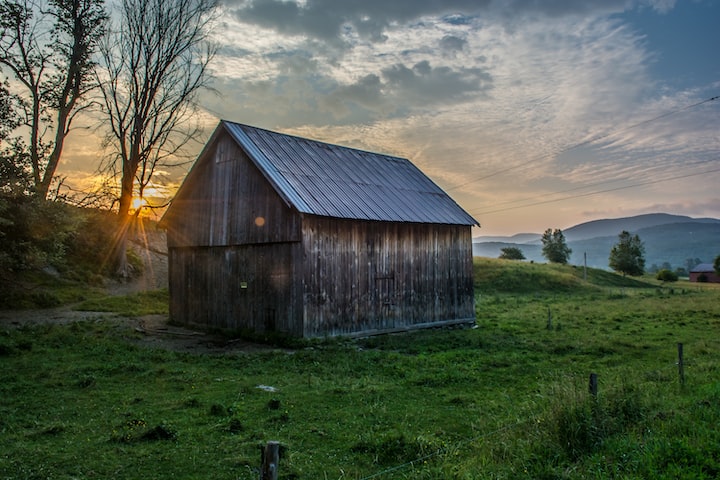 Photo by Kevin Jarrett on Unsplash

In an old barn in western Iowa, on the property of J. Wendel Reinbar, there exists, in its entirety, the metaphysical realm of Hell.

“The dominion of demons and the Devil himself?”

“Where the souls of the damned burn in torment for all eternity.”

“There are nuances, but yes.”

“Well, the Christian concepts of hell can be slightly skewed.”

“And the concepts of punishment and torment are mortal ideas based on our physiological experience of the world, such that—”

“It, um, sounds like you went to some advanced version of Sunday School.”

“So, Hell is underneath the land?”

“Well, the outside is a finite space; the inside is a completely different metaphysical dimension.”

“Have you been in there?”

“Oh sure, lots of times. Part of the roof caved in at one point and I had to repair it.”

“So, you traversed Hell to fix the roof of your barn?”

“And you came back out?”

“So, you’re a demon or something?”

The man adjusts his glasses.

“A barn. Why is it a barn and not, I dunno, something else?”

“Well, they had to put it somewhere.”

“I mean it was there when I inherited the land.”

“So, someone else – a previous owner – must have built the barn?”

“No, the barn’s always been there. Since the beginning of time.”

“Think about it like this – Hell is intertwined with our reality at a particular metaphysical bulge, which we perceive as a physical location.”

“You seem to have given this a lot of thought.”

“The Devil has taught me most of it.”

“Lucifer; He who rebelled against the Almighty.”

“Oh yeah, that’s actually why I stopped by today.”

“He is! He always gives me coupons for stuff.”

“The Devil … gives you coupons?”

“Of course! And he’s great with finances; very keyed into the markets.”

“You take financial advice from Satan?”

“No, no. The Devil just likes him. Thinks he has gravitas.”

“A while back he tried out Missy Elliott; he’s obsessed with her music.”

“Hey, I just realized that they both have ‘Elliot’ in their names.”

“I wonder if that’s a metaphysical pattern.”

“The interaction between spacetime and the nether-realms creates super-existential patterns of time and information. That’s kind of why physics exists.”

“It’s also where the word ‘supercalifragilisticexpialidocious’ comes from.”

“Sir, I’m beginning to think you’re just being a bit eccentric with me.”

“Apologies, apologies. I do tend to go off on tangents.”

“Oh, I’m just looking for zoning approval to build an annex to the barn.”

“Yeah, the Devil and I want to have an indoor hot tub.”

“The Devil … aren’t there hot tubs in Hell? Or, I dunno, boiling lakes of blood or lava or something like that?”

“Yessir, I have the Building Permit Application right here.”

He looks over the form.

“Thanks, we even added—”

“Is this a skylight?”

“Oh, wait, you forgot the smoke and carbon monoxide alarms.”

“Right, I wanted to talk to you about that.”

“See, the problem is … the alarms will be adjacent to Hell.”

“And there’s a lot of smoke and carbon monoxide in Hell.”

“So, you can see the dilemma – the alarms would be going off constantly.”

“Wait, you have alarms in the barn, though, right?”

“In the barn – what you’ve just described is an unbelievable fire hazard.”

“Yes, you mentioned that, but you’ve got to have your structures up to code, Mr. Reinbar, be they physical, metaphysical, or … bulge, um, bulge-related.”

“Come to think of it, we should really send an inspector over to take a look.”

“And you might have to pay a fine if there are code violations.”

And with that, Mr. Reinbar reaches out his hand, touching the other man on the shoulder. The man instantly bursts into flame, burning completely into a fine ash in less than five seconds. The ash forms a small mound on the man’s chair. Mr. Reinbar observes this for a moment before the smoke alarm in the office goes off. Mr. Reinbar takes back his “Residential Additions & Attached Garage Permit Application” and makes his exit.

Mr. Reinbar parks his car and walks up the gravel path towards the barn. Sam Elliot is there, leaning against one of the barn walls.

“No dice; they said we need smoke alarms.”

“They said we need them in the barn, too.”

“Ugh, did you tell them it’s contained?”

“But did you tell them about the bulge?”

They stand there for a moment, considering the grey, overcast sky. The beautiful façade of the barn shimmers slightly. Its peeling red paint could have been gingerly applied by the hands of a thousand cherubim, or a gruesome sheen made from blood of a billion damned.

“We could just take a dip in the Styx.”

Old Hob looks up at the barn. He puts his hand on her, feeling the subtle vibrations of eternities within Eternity. The smell of old wood is sweet in the misty air.