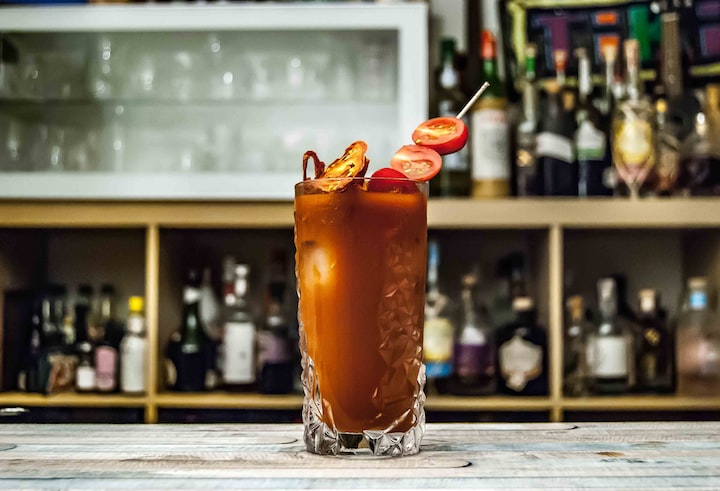 Photo by Johann Trasch on Unsplash

A slice of chocolate cake stands upright in the corner, unaware that it was recently on the countertop. There is a salad fork on the ground next to it. Its chocolate sprinkles are in disarray, a chaotic trail of them leading from the counter to the corner. A whisk is also nearby, its wires specked with blood like the bones of a metal bird. The slice of cake has no opinion on the whisk, be its colors silver, brown, or red.

There are knives in the kitchen, although fewer now than earlier in the day.

The refrigerator hums haughtily. It’s the oldest appliance in the kitchen and is very opinionated. Although, like the slice of chocolate cake, the refrigerator does not have any opinions re: the whisk. Mostly the refrigerator just likes to complain about the nature of chlorofluorocarbons and the differences between the Imperial and Metric systems. It also has serious opinions about the show Cheers.

What? … What’s that? … Yes, you’ve said that before. … Yes, I realize that it has a record number of Primetime Emmy nominations …

The whisk has never seen Cheers.

There is a mixing bowl on the floor on the other side of the room. It can’t see the chocolate cake from where it’s sitting, but it knows it’s there. Like a maternal instinct. The bowl is overturned. It looks like a large silver boil on the floor. Or a hat. The bowl has been a hat before, but not for many years. It prefers being a bowl to being a hat, but it respects the whimsical nature of its former patrons. Bowler hats, though, that’s a different matter. The bowl despises them. Be a bowl or be a hat; none of this “best of both worlds” nonsense.

The bowl is considering the overturned chair immediately in front of it. The bowl and chair have never interacted before, although they’ve lived in the same house for … what? Fourteen years? Always good to make new friends. The chair is a bit confused as to the state of its legs. They are pointing into the air like the spines of a dead urchin. They are also a bit … what? Greasy? Is that how it would describe the sensation? The chair has had things spilled on it before, but not this particular kind of sauce.

The chair would like to get the bowl’s opinion, but the chair can’t get a word in edgewise.

The blender is, remarkably, still on the countertop. There was this one time that its patrons made Bloody Marys, but then dropped the blended mixture on the floor. The blender remembers because it was very annoyed – it had done all this work! Do you know how hard it is to balance the meshed chemistry of tomato juice, vodka, cucumber, vinegar, and celery seed? Vodka and tomato juice are both stubborn solutions, not to mention vinegar. It’s an art to convince them all to combine properly – there’s weight to consider, movement speed, differing textures, temperature. The old refrigerator can sympathize with the temperature element. Although mostly it just wants to talk about its own interests. Especially Ted Danson, who it has a huge crush on. Like, yes, we get it, Ted Danson is a national treasure, but …

What? … No, I’m just not really into 80s sitcoms. … Well, yes, of course I’ve seen Frasier. … Yes, I understand you think it’s not as good, but … What’s that? … Yes, the theme song is iconic, but there’s not a lot of racial diversity in the cast, you know? … Okay, but just because I’m a blender doesn’t mean I think the answer to racial justice is merged racial homogeny. I … What’s that? … Oh, here we go again about the Metric system …

Anyway, what were we talking about? Oh, right, there’s a bloody Mary on the floor.