Mystery of the Old Family Barn

"I never told her the awful things you did here!" 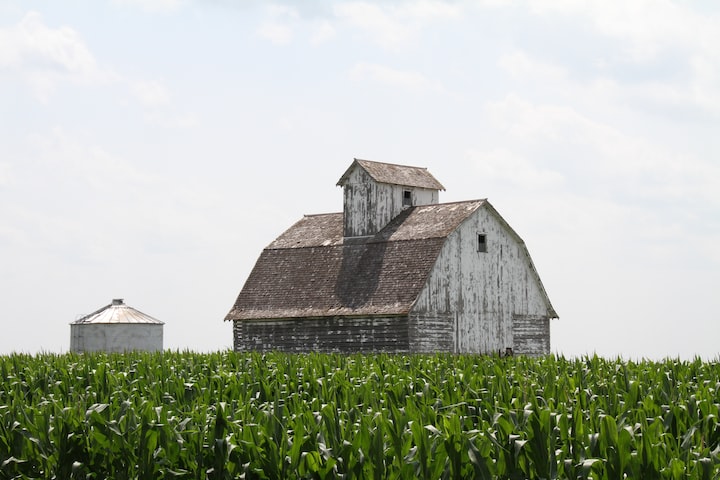 Photo by Kelcy Gatson on Unsplash

The old barn at the back of the pasture was always forbinned. Her mother would always tell her she wasn't allowed to be near it, much less go inside. "Maggie suppers ready!", as her mother lets the screen door slam shut. She runs in to wash up for supper, her mother meets her in the kitchen and asks, "How many times do I have to tell you, that barn will hurt you if you go in it. Do not let me catch you over there again Maggie." She knew her mother wasn't telling her everything about the barn.

The property was inherited through the family. It was just Maggie and her mother, as her father had passed while she was a baby. Maggie's grandparents used to run cattle on the land and use the barn as a slaughterhouse. But Maggie's curiosity tells her that there's more hiding in that barn.

Maggie and her mother sat at the table, while they started serving their plates. Maggie brings up the barn once again to her mother. "You already know, grandpa slaughtered cows in that barn. If there was more that happened there, then I am not aware of it. It is old and falling apart. If you go inside and then the damn thing collapses on you, then what, huh?" Maggie put her head down and started to push her food around on her plate. "You know mom, sometimes I think more has happened and I just find myself there. I don't even mean to go over there." Her mother responded, "Well don't go over there anymore. For the last time Maggie." They finished up dinner and Maggie started to clean up the kitchen.

After finishing, she went upstairs and started to get ready for bed. She had her nightstand light on, but the room was darkened. Straight out her window was a perfect view of the old barn. It never had caught her eye like it did tonight. Maggie went over to the window and stared at the barn. The longer she stared, the more she could hear it. "Maggie, come inside. We just want to play." Before she knew it, Maggie was outside, walking through the pasture to the old barn. "Maggie, come inside, we've been waiting for you." When she got there, the side door of the barn was swinging open and shut, but not enough to slam loudly. Maggie walked over and stood in the doorway, looking inside. As she went to take the first step inside, a cold breeze came over her, and she heard a quiet whisper, "Don't go sweet girl." Maggie got chills but didn't listen to it. She went inside.

It was dusty and the smell was overwhelming. There was an old tractor and cattle trailer in there. Some of the framing boards were broken, so Maggie's mother was right, of course. The barn could collapse at any minute. As Maggie walked through, she got an eerie, uncomfortable feeling, like she wasn't alone. As she makes her way through the barn, she saw what looked like a little girl run behind the tractor. Maggie shouted, "Hey, I seen you! Come out!" Maggie started to walk around the tractor to find there to be no one. She started to feel nervous and thought to herself, "I should go back inside the house." As she made her way back to the door, she heard a little girl's voice, "Don't you want to play with me?" Maggie quickly turned around and seen her. She had little blonde piggie tails, and a white dress on. Maggie asked her how she got in there. The little girl put her hand out and said, "Let me show you." She led her to a door that went to an old cold room for the cattle. The little girl pointed and said, "I was brought here and put up there, but I can't find my way out." Maggie said, "What do you mean, put up there?" Maggie started to go inside the room, but the little girl stopped her. "No, he will get you too. Come on, I will show you my best hiding places." The little girl runs and tells her, "You're it! Come find me." Maggie tries to run after her but loses her in the dark.

Maggie finally decided that she had discovered enough for one night and went to leave the barn. As she reached the door, she sees it shut, and when she tries to open it, she can't. It seems to had been jammed and won't budge. Maggie starts to feel uneasy like she may be in danger. She heard heavy footsteps and breathing getting closer. She starts to try and find another way out, however, all the other doors were locked from the outside. She tries to find a hiding place, but the footsteps are getting too close. "Oh, there you are. I've been waiting for you, Maggie." A taller, dark figure stood at the end of the tractor, as a deep voice spoke. Maggie asks, "Can I just go back inside. I promise I won't intrude again." The dark figure responds, "You've already entered. You can't leave." It started to quickly approach Maggie, as she runs around the tractor and finds herself near the cold room. She runs in there and shuts the door. Lights power on and the scene of the room changes. Maggie screams and yells, "What's going on?" As it seems to be a memory of being in the room when her grandfather would hang the meats, after slaughtering the cows. There was a metal table on the other side of the room with a person laying on it, covered with a white sheet. Maggie stands up and starts to walk over to the table, but then hears someone coming in. The dark figure that was chasing her, comes from a back room. His face is not shown. He is holding what looks like a table saw. He powers it up and starts sawing away at what is laying on the metal table. Finishes up that part and carries it to the back room. Maggie runs quickly to the metal table, to find that the person on the table, was the little girl. It was clear that she had been tortured and mutilated. Maggie puts her hands over her mouth and she tries to muffle the sound of her startlement. She runs back to the door she had gone through to go into that room. "Did you like what you saw in there? Your mother has told you to stay away from this place. Now, you will learn." The dark figure grabs her and carries her back into the cold room. Now there were no lights and the metal table wasn't shining as it had just been. The dark figure picks her up and slams her on the table strapping her down. Maggie starts to yell, but the dark figure says, "No one can hear you now, it's too late for that." He stuffs something in her mouth and tells her, "You wanted to be in here so badly, now you're one of us forever." He started his saw and started sawing at Maggie's arms, as she passes out from the agonizing pain.

Morning came, and Maggie's mother went to her room to wake her up for the day. When she went to her room, she couldn't find Maggie, and knew right away, where she had gone. She screamed and wept in fear, as she ran outside to the old barn. "Maggie, no, no, no. My baby, please don't say you did!" She gets to the barn, to find the side door swinging back and forth from the wind. Her mother yells, "Papa!! You took her. You should have spared her! I never told her the awful things you did here! She didn't need to know, and you made her one of your victims!" She went inside the barn, where she would find herself, to be the next one.