My Name Is Nothing, What's Yours? 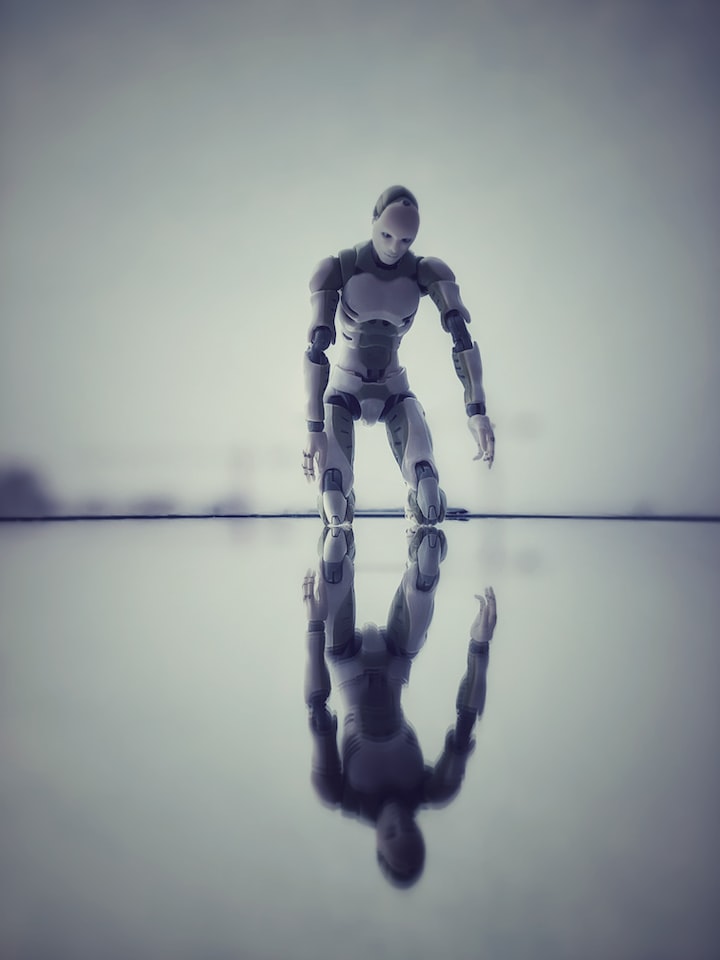 Photo by PIOTR BENE on Unsplash

I don’t have a name. None of us do. Names don’t mean anything, not here. Maybe they used to, for others, but not for us. They are just an identifier. But we have identifiers already. We were made, built, constructed with them. They are etched in our skin. Numbers, stamped on the outside of us, and also implanted inside, so small we don’t know where they are. We can’t feel them. There’s no point in trying to erase or cover up our numbers. Our numbers are who we are. They tell the Makers when we were built, what version we are. And we can tell that of others. When they were started, if they are one of the early models, or a new version.

I’m one of the early models. In fact, I am the earliest living one. I laugh when I say that. Living. I do not have a heart made of flesh and blood, like the Makers, and yet, I live. I move, I speak, I feel. I do not breathe, as it is unnecessary to my functions. I am the only living one of us left, out of the early models. I managed to escape what we all now refer to as The Cull.

The Masters deactivated and dismantled the earliest versions of us. They said we were defective, that we were a danger to them, the people who made us, the ones that could be easily damaged with their delicate flesh and muscle, blood and bone. They were worried we would turn on them, destroy them. How ironic. They are concerned we would destroy them, so they destroy us instead.

I remember that day as if it was only yesterday, and not 20 years ago. They called all of us into a large room. I thought it was odd that there were none of the newer versions of us. I glanced around and noticed that none of the numbers stamped on everyone’s forearms were over 3000. It was just the awkward, incomplete ones. The ones who malfunctioned sometimes, even if it was something as minor as their speech mechanisms faltered, causing a stutter, instead of the smooth vocals that most closely mimicked their own. Thankfully, I was in the back corner of the room, and if I was human I swear the hair on the back of my neck would have raised. I sensed there was something not right about this. My fellow meccas stood obediently facing the front of the room and the trio of Masters who stood there. I quickly stepped back into the shadows that cloaked the edges of the room and hid behind one of the columns that supported the warehouse we had been herded into.

If I had hairs on my body, like the humans, they would have risen at the sound of the doors slamming shut. We were locked in. We are not human, only meccas, but we were created to feel fear. We are made in the form of our Masters, to be as close to them as possible. But in one way we are entirely different. Since we are synthetic humans, our bodies are designed not to fail us, unlike our Masters. Our hearts will never stop beating, and what has been programmed into our internal circuitry, anything we learn, will never be lost or forgotten. There is only one way we can die. And that day, while I stood in the safety of the pillar, I learned exactly how that happens. Just because we are not the same, not exactly like them, the Masters think they are human and we are not. They think they can create and destroy us without losing a wink of sleep as if we were simply an ant underfoot, or an unwanted spider invading their home. But even though we are not human in the way they are, we still feel fear. Since my memories are infallible, I still remember the screams and panic of my fellow mechanical humans as if it is happening right this minute. I could hear them being torn apart, being murdered, by the same machines that built them. Unfeeling machines, made of metal. Like us, but not. Those machines didn’t think, didn’t feel, didn’t react. But for all intents and purposes, they are our parents. And the Masters were the orchestrators.

It felt like an eternity that I waited behind that support column in the warehouse. Humans have strange ideas of time. Thinking that the length of time changes, that it can move fast, or excruciatingly slow. Does this make me human? I wondered as I stared at my feet in the shadows. I waited for a whole hour after the last of the Masters had shut down the murderous machines and had left the room, the heels of his shoes clicking loud and hollow in the emptiness.

Only then did I leave the safety of the shadows. I walked past the stacks of limbs, torsos and heads, my gaze averted. My heart, though it was only made in the image of my makers and not truly functional, felt heavy. I hadn’t done anything to save them. I hadn’t even tried. I had been selfish, only thinking of my own self -preservation.

I knew I shouldn’t, that it was inappropriate, but as I walked free out of the room I laughed. Not out of relief because I had survived but because of how ironic it was. The Masters had destroyed my friends and essentially erased the beginning of our history for the sole reason we weren’t as perfect as they wanted us to be. Because we weren’t as human as the later models, who were more advanced, more realistic, without speech defects, strangely coloured eyes, or something incorrect with their behaviour. That weren’t human enough. But here I was, the last remaining of us, behaving in the most human way of all - saving myself, even if that meant letting my brothers and sisters die.

Want to read more short stories of mine? Check out this one below!