A field historian doesn't need a crystal ball to interact with the dead. She has time travel for that purpose! 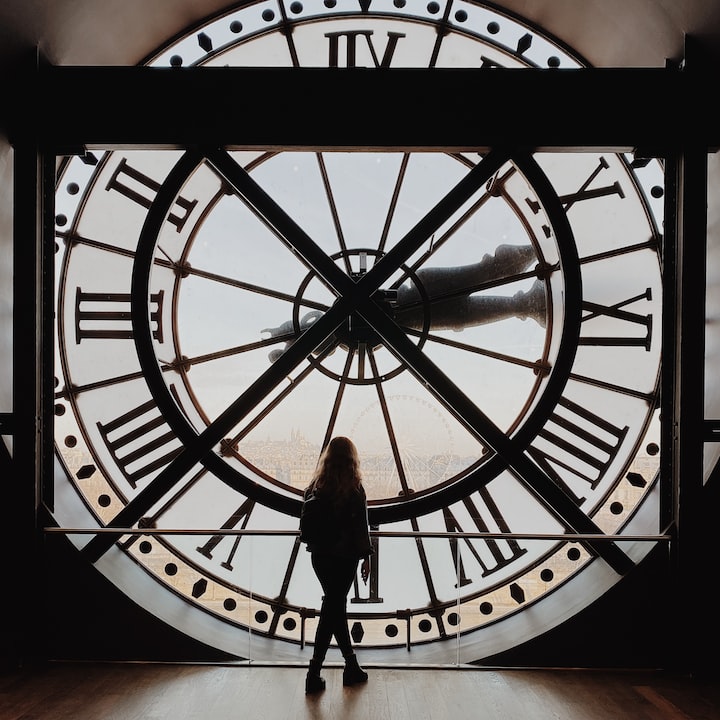 One learns to be patient, after a time — no pun intended — toiling in the lower ranks of the Time Bureau. I was not blessed with a patient mind, nor with an altogether forgiving nature, as many an ex of mine can confirm, but I do toil, most loyally. I recall when my moment of opportunity arrived, and it did not arrive alone…

“Researcher Second Class… Ellis, am I right?” The voice startled me just a bit, not so much that I would visibly show its effect on me, as I walked across the quadrangle towards my assigned office in the Bureau’s Zurich campus. Not a stranger’s voice, to be sure. This was a most familiar, and somewhat intimidating, voice, issuing from the throat of Director Odom, my superiors’ superior. “May I accompany you?”

I am nothing if not a woman with a plan; my plan was not to betray what I could feel was my irritation rising. Forcing myself to be Stoic, I spun with tight, simulated good cheer on my features and said merely: “It’s actually Researcher Mundy. Ellis is my given name, Mister Director.”

He would have to emphasize my ‘lowly’ rank. Field historians employed by the Bureau occupy four distinct echelons. The lowest, Fourth Class, works quality-control assistance, pouring over these minutely-detailed reports our agents in the past send home to us. Third Class assists in doing local-time interview sessions involving historical persons — “ghosts” — brought forward to our headquarters to be interviewed, and mind-wiped, prior to being returned — just a fraction of a second after their departure, to their original time and place, preserving the very past we document.

Second Class was in many ways the most frustrating level. Not considered of a sufficient level of expertise to conduct long-term, on-site research, in histories, we were permitted to train field historians, and, when necessary, to make the odd, targeted visit to the past, in order to deliver important messages and, in a rare case or two, deliverance itself to field personnel. Every student, and I am no exception, wishes to advance: to full-time (yes, it happened again) time studies, as First Class Researchers, in the expanse of our yesterdays.

He did not appear to take an offense at my correction, despite the thirty years’ natural life by which he had preceded me. I did not have much time to ponder it long. He was speaking again, in a heated rush of words:

“I’m just on my way to Anachronisms, to look at some of the startling finds, just brought back from eastern Canada. Think of it, Ellis: Vikings, with firearms, circa-2000 model, in tenth-century Newfoundland, terrorizing the Dorset culture! May be evidence of tampering with the past. Must investigate further. What do you think?”

We moved through the outermost door, and through security screening. “I believe, sir,” was my measured reply, “that I would be most excited to participate in such an investigation.” Of course I wanted that assignment! "Are you asking me, a... Second Class Researcher, to take part in such an important field assignment, sir?"

He stopped to blink at me, once, twice. “Yes, yes, now that you bring it up, you would make an adequate contribution. Provide some liquid files to Resources; they’re doing the initial due diligence on this, owing to the anachronistic nature of the artifacts. And if it’s not going to jinx you… welcome to the team, Mundy!”

I knew it would be a life-altering opportunity. I must have been weepy-smiling when I said, “It’s Ellis, sir.” I would have liked to see the look on one particular Researcher’s smug face when he discovered my unexpected career fortune — a "mere" Second Classwoman, upstaging the great First Classman, Peter Anholts?

I seemed to recall, he had once described me as having a certain cubic quality; no small flattery in our age, but his subsequent antics left me unmoved, when a brief posting to nineteen-sixties London had turned rather permanent. Not a fatal kind of permanent — he just wanted to return, rather sooner than our Case Minister would allow him to do.

We "field historians" run that risk of being a bit too “adequate” for some postings, and permanent residency in the distant past is often seen as a reward, to someone from our century, for a job well done.

Once I had completed an interview of potential candidates for extended study in the Hong Kong of 1997, I segued to the Dining Garden, in Tertiary Building Three, which was becoming one of my favorite spots to eat, and read my lunar romances. I was normally not given to sharing my time and space with others, even if my recent tingling sensation made me feel like boasting, if anything, so I ate alone as usual. Apart from me, several other Researchers, in twos, threes, and larger collections, ate, studied their sleeve consoles, and discussed what a distant observer could only guess about.

Several weeks elapsed. I had almost forgotten about the assignment. At length I received a message to report to Director Odom’s office. His offer, including me in a continuing post to the ancient Canadian wilderness, had been a genuine one. I was excited, but a bit perplexed, as I explained to him: “I specialize in the time period from 1950, old calendar, to roughly one century later. I suppose, sir, I will have much to learn. The Viking tongue, perhaps? Customs of the era?”

He waved this off. “Quite. Plenty of time, so to speak, to concern yourself with that. I look forward to seeing how you perform on the psychological trials.” I gulped a bit, I think; I was not eager to subject myself to those. The hazard of a deep-immersion post to the past included the genuine risk of emotional attachments.

One unguarded moment of enthusiastic participation in the events — and lives — of “Ghosts” could alter our present reality. We had to be observers… not act in a way that would interfere with what had happened already.

Once I gathered myself together, I realized I should do rather well at that. I was twenty-eight, more than ready, to join Yesterday. Day after day, I had been cautious about my interactions with my fellow historians here in the present. It should be no problem, regarding citizens of yesterday as a protected class, of sorts. I reported to the evaluation center, with high hopes, the following morning.

A virtual-simulation chamber had been activated, presenting me with scenarios I might be expected to encounter. I attended a virtual cocktail party at which a foreign spy attempted to recruit me, without success. In a virtual corporate set representing a business office, I discovered one of my coworkers stealing from the company, and chose not to act. A homeless couple who seemed a few days away from collapsing from their hunger and fatigue; I offered a few coins, but did not otherwise assist them. A violent crime broke out in a restaurant; it inspire me not to act, but merely to flee the building to call the police. I kept to the shadows, in each case, and I felt all but certain I had passed the audition.

It fell to Odom and an unnamed Case Minister to inform me, two days later, of my error. Odom looked on, frowning, as the Minister told me, "This presents us with a rare quandary: how do we fail a person, who has performed too well on the exams? Yet it seems, Researcher Mundy, that you’re too much what we’re looking for.”

“I don’t understand, Minister.” I tried to draw out her meaning, but her gaze was, if anything, inscrutable, more than I had trained mine to be. “I received top marks, on my knowledge and my skills, didn’t I?”

“Indeed, you did,” Odom piped in. “I knew she would, Minister.” In the "time" (sigh) that I had been in Switzerland, I had encountered nothing more mysterious than the workings of the higher-ups in the Bureau, as if they themselves were wheels, turning within other wheels... just like the machinations of an old-style clock, which seemed appropriate somehow.

The Minister nodded. “As for the other requirement — your performances, in a battery of emotional and stress tests, were almost too good. You don’t interfere with historical events… it seems you have, shall we say, an excess of reserve.”

“I thought that was our mission,” I objected. “To record, not to interfere.” I was trying to work it out, deduce what they expected me to glean from their offer.

“Yes, indeed. Observe, study, record. You wield intelligence and wit in abundance. You’re adept in our physical self-defense arts. You chose to pursue field history as your profession. Now, you just need to put yourself, more fully, out in the field. History was made by people. You must learn it from them. You appear to have a degree of reluctance to interact with others that, we estimate, would prove a hindrance to your job. In plain language, you don’t interact enough.”

“I did not receive the assignment,” I must have sputtered, “do I have it right? I failed the test?” They wouldn't dangle this opportunity, only to snatch it away?

Odom smiled, an odd thing to do at someone receiving such a blow. “You can’t fail a test, when you haven’t finished taking it,” he said. “Be valiant, Ellis.”

“We will review your progress, Researcher Mundy,” the Minister added. “In a few months’ time, a posting to the past will open up, with your name on it — you may yet join this one. It remains only for you to do some judicious extra-curricular work to… earn it.”

I pondered what she meant by that, until dinner that evening. I almost made a familiar decision to dine alone in my flat, before I realized what I wanted most was to earn that posting, even if it meant I had to risk public embarrassment. I forced myself to visit the dining hall. Researchers of various Classes had chosen tables and chairs. Collecting my own meal, I approached six colleagues at a nearby table, and summoned a bright smile that almost hurt: Patel… Guthrie? Cermak, Rhee …ah, Levin? Neuville! I intended to tell them, of my setback.

“Can I be your lucky seven?” I asked them — class was in session!

Ink-slinger. Photo-grapher. Earth-ling. These are stories of Science Fiction, Fantasy and other genres. Fighting crime in Gotham keeps me up nights, so I write on rooftops. (Okay, that's not true!) 'Wolf': https://unsplash.com/@marcojodoin.

More stories from Eric Wolf and writers in Fiction and other communities.