Light at the End of the Tunnel

by Nicholas Kleinhenz 10 months ago in Horror
Report Story

No one escapes Death forever 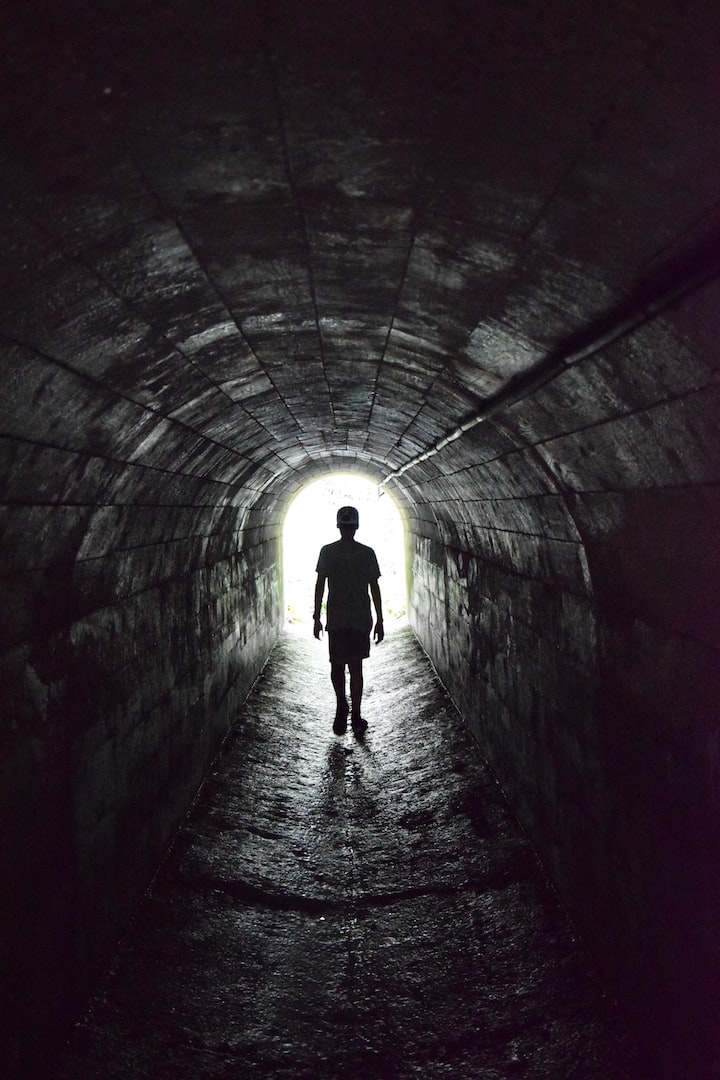 Photo by Benmar Schmidhuber on Unsplash

Freddie awoke face down in a soft, spongy muck. As he stood up, he could see a faint, greenish glow in the distance. Where am I? he thought as he took a look around. It was dark, but the faint, greenish glow provided enough light for him to make out that he was inside some sort of tunnel. The walls seemed to consist of a tangled web of thorny vines. Freddie looked down to see that he was ankle deep in the sticky brown muck that covered the ground beneath him.

“What is this stuff?” Freddie asked himself aloud. It seemed that his surroundings were becoming easier to see. The faint, greenish glow was becoming brighter and more brilliant with each passing second. Freddie could hear the sound of water dripping nearby.

“Hey!” someone shouted from the distance. “Hurry, you have to run!”

“Who are you?” Freddie asked as cold sweat began to roll down the back of his neck.

“Just run from the green light!”

Freddie looked over his shoulder to see that the green light was, in fact, racing toward him. He began to run, but the muck beneath his feet made it difficult; it was like running in slippery quicksand. He followed the person who had called out to him as quickly as he could, but every time he glanced back over his shoulder it seemed like the green light had halved the distance between itself and Freddie.

“In here,” the voice shouted from a doorway on the right side of the tunnel. “Hurry!”

Freddie bursted through the doorway and fell to the floor gasping for air as the door was slammed shut behind him. Freddie quickly glanced around the room, which was more like a large maintenance closet, to see five other people staring back at him.

“You barely made it.” a man dressed in a dirty suit said. “I am . . . er . . . I was F.BI. Agent Walker. Jerry Burns over here was a private informant from Chicago.” Jerry gave a half-smirk in response. “That man was David Campbell who was wrongfully sentenced to death for being The Marigold Killer in the town of Ellis, Alabama.” David did not acknowledge the introduction. “This young lady, Kendra, was a high school student in Midtown, California.” Kendra waved. “Apparently the other lady’s name is Lisa, but that’s all we can really get out of her. I think she went through some kind of traumatic experience.” Lisa was huddled in the back corner of the room with her head between her knees. “Tell us who you are.”

“You were a high school varsity football player from Chesterfield.” Kendra corrected.

“Gotta come to terms with it at some point, kid,” Jerry piped up. “we’re all dead.”

“Afraid not,” Agent Walker affirmed. “this is what we were told by a man who had been trapped here, just like we are, for a very long time.”

“What happened to him?” Freddie asked.

The others exchanged looks among themselves. “He’s gone now.” Kendra said.

“What do you mean by that?” Freddie asked, suddenly becoming suspicious of the others in the room.

“It means that he lost the will to go on. Being trapped in here makes you go insane after a while.” Jerry said grimly. “He walked out in front of it.”

“In front of what?” Freddie asked in a frustrated tone of voice.

“The Eraser,” Agent Walker said bleakly. “that’s what he called it, anyway.”

“The green light.” Kendra explained. “Mr. Campbell reached out to pull him back inside, but it took his hand along with the man who was here with us.” David held up his arm, which was only a flat, mushy-looking stump of flesh and bone, and put it back down beside him.

Freddie looked terrified at the sight of David Campbell’s half-arm. “It didn’t hurt.” David reassured him. “It didn’t even bleed. If I hadn’t seen it with my own eyes then I wouldn’t have believed it either.”

“I have so many questions.” Freddie said after a few moments of silence.

“We all did.” Agent Walker replied calmly. “Ask us and we’ll try to help you understand better.”

“First off, what the hell is that Eraser thing?”

Jerry was the first to speak up. “Have you ever heard of the light at the end of the tunnel? That’s what it is.”

“Oblivion.” David affirmed as the rest nodded in agreement.

“Are there others like us trapped somewhere in this tunnel?” Freddie asked hoping for some reassurance.

“No idea,” Agent Walker replied. “none of us have left this room in a long time.”

“You haven’t gone out there to check?” Freddie asked.

“All we really know is that the Eraser comes whenever someone new wakes up in the tunnel.” Kendra said.

“I could probably outrun it if all of that mud wasn’t out there.” Freddie said. “I ran one-hundred meters in ten seconds at football practice last year.”

“It’s the leftovers.” Lisa muttered from the corner.

“Apparently she watched it happen to someone.” Jerry announced as he stood up to stretch his legs.

“So what do we do now?” Freddie asked as he approached the door.

“Tell stories to pass the time until we can figure something out.” Agent Walker suggested.

“We’ve been doing that for days.” Jerry complained. “When are we going to try to figure out how to escape?”

“There’s no escaping this.” David responded quietly as he stared through his missing hand.

Freddie sat down with his back against the door as the rest of the group relaxed back into their new home once again. They each began recounting their life stories for Freddie in exchange for hearing his. It was a mostly boring exchange aside from Agent Walker’s action-packed F.B.I. stories. The only person in the room that didn’t speak was Lisa, who still sat in the far corner watching them all carefully.

“Hello,” Freddie heard a muffled voice calling out in the tunnel. “is anyone there? I’m scared!”

Freddie jumped to his feet and yanked the door open. He saw a young boy wearing a winter coat standing in the tunnel looking around fearfully. The Eraser was approaching fast with a crackling roar. Freddie knew that he wouldn’t have time to reach the boy and make it back to safety. It was much too risky. “Hey, come in here! Hurry!” Freddie shouted.

The boy gave him a puzzled look. “My mom said not to talk to strangers.” he replied hesitantly.

“Well, it’s safe in here.” Kendra said as she pushed past Freddie with a soft smile on her face. “The monster will get you out there.”

“Marcus.” the boy replied as he looked around for the monster. Apparently he had not noticed the green light of the Eraser rushing toward them.

“Come hang out with us for a bit, Marcus.” Kendra pleaded. She knew that the situation was becoming more desperate with each passing moment. Freddie grabbed her arm and gently pulled back on it.

“We don’t have time for this. He won’t make it.” Freddie reminded her.

“I’ll go.” said Lisa as she pushed past both of them. It was the first time she had spoken anything coherent since any of them had arrived.

Lisa rushed to Marcus’ side, but it was much too late for them to return to the room. The Eraser would be upon them moments later. Lisa knelt down and embraced Marcus. “It’s going to be okay, honey.” she reassured him. The Eraser crackled through the air around them. Kendra screamed as Freddie dragged her back inside the safety of the room just in the nick of time. The Eraser roared past once again just as it had done when Freddie arrived.

After a few moments of silence, the group heard Marcus crying a loud and heavy sob. They exchanged exasperated looks as they all rushed to the door. Agent Walker held up his hand as he pressed his ear against the door. “He’s still out there.” Agent Walker opened the door and peered into the dark tunnel. As he stepped out of the doorway, the green light of the Eraser appeared at the opposite end of the tunnel. It was on its way to claim him next. He sprinted for his life, scooping up Marcus in his arms and carrying him into the room.

Agent Walker slumped against the wall to catch his breath as Kendra got Marcus situated.

“What did you see out there, Marcus?” she asked in a doting tone.

“That lady disappeared.” he replied with tears in his eyes. “Where did she go? Did the monster get her?”

“No, the monster didn’t get her.” Jerry answered as he walked over to check on Agent Walker. “She had to go somewhere, but she said she’ll come back real soon.” Agent Walker gave Jerry a side-eye glare.

“My chest hurts really bad.” Marcus said as he struggled to breathe.

The group exchanged worried looks. David had kept quiet and was attempting to hide his stump of an arm behind his back in order to keep the kid from being afraid.

“Take off your coat and try to relax.” Agent Walker said as he sat down beside Marcus. “What do you remember before coming here?”

“I was playing on the lake with my brother. Then I fell through the ice and woke up here.” Marcus answered. “I miss my momma and my brother.”

“You’ll get to see them again real soon. They’re going to come looking for you.” David said from his corner of the room.

“My chest hurts really bad!” Marcus said as he placed his hand over his heart. The group watched as Marcus, or rather his image, began to turn from opaque to translucent. The boy looked down at his hands. “What’s happening to me?” he asked in terror.

Everyone else exchanged looks again. “Holy shit,” Jerry exclaimed. “someone is doing C.P.R. on him!”

Freddie placed his hand on top of the boy’s head. “Give your mom and brother our regards.” he said as the boy disappeared and his hand slipped down through where Marcus had been standing a moment ago.

“What just happened?” Agent Walker asked. He was clearly perplexed by Marcus’ disappearance.

Freddie thought for a moment and answered. “He was revived.”

“And that’s why the Eraser didn’t destroy him. He was still between life and death.” Kendra added with a smile.

“So if someone isn’t fully dead, the Eraser skips them until they die?” Agent Walker asked.

Everyone else nodded in agreement.

“I don’t understand either.” David announced as he stood up. “I’m going for a walk.”

“That’s suicide.” Agent Walker said as he blocked the door.

“Let him go.” said Freddie as he pulled Agent Walker aside. “We exist here long enough to tell others what we’ve witnessed here. In a way, we’re guiding lost souls to the afterlife. There’s nothing else left for us to do here. Once someone has decided that it’s their time to be erased, I think we should let them go.”

“Agreed, I’ve made my peace with this.” David said as he walked out into the tunnel.

Kendra closed the door behind him. They all waited in silence to hear the Eraser’s roaring crackle take David away.