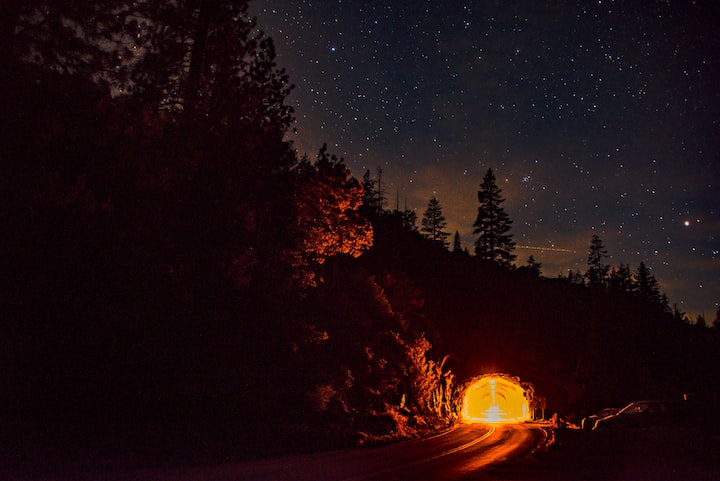 Photo by Sam Goodgame on Unsplash

June and Amy had been best friends for years, and they had always dreamed of going on a thrilling adventure together. One night, they decided to make that dream a reality and set out to the mountain area for a camping trip. They packed their bags, and with excitement in their hearts, they headed out on their journey.

As they drove deeper into the mountains, the roads became narrower, and the darkness seemed to be closing in around them. But they pushed on, determined to reach their destination. Finally, they arrived at a small cabin in the woods. They settled in and decided to explore the area.

As they walked through the forest, they heard strange noises and saw shadows moving in the distance. They shrugged it off, thinking it was just their imagination, and continued their walk. But as they reached a clearing, they saw a faint light in the distance. They followed it, and soon they found themselves standing in front of a large, ancient-looking stone structure.

The girls couldn't believe their eyes. They had never seen anything like it before. The structure was covered in strange symbols and carvings, and they felt a chill run down their spine as they realized that they had stumbled upon something truly mysterious. They decided to investigate further and climbed to the top of the structure.

As they reached the top, they saw that there was a large opening in the center. They peered inside and saw a spiral staircase leading down into the depths of the structure. Without hesitation, they began to descend the staircase. As they went deeper, they heard strange noises and felt a sense of dread growing in their stomachs.

They soon found themselves in a large chamber filled with strange artifacts and ancient relics. They couldn't believe what they were seeing. It was like nothing they had ever seen before. As they explored the chamber, they came across a strange book. It was bound in ancient leather and filled with strange symbols and writing.

They couldn't understand what the book said, but they knew that it held the key to the mystery of the structure. They decided to take the book with them and began to make their way back to the surface. But as they were leaving, they heard a noise behind them. They turned to see a group of hooded figures standing in the shadows.

The hooded figures stepped forward and revealed themselves to be a cult that had been waiting for someone to discover their secrets. They told the girls that they were chosen to be the chosen ones who would help them to achieve their ultimate goal. June and Amy were terrified, but they knew that they had to get out of there.

They made a run for it and managed to escape the cult. They returned to the cabin and quickly packed their bags. As they drove away from the mountain area, they knew that they would never forget the strange and mysterious adventure that they had just been on.

The girls never spoke about their adventure to anyone, but they knew that they had uncovered a secret that was better left buried. They knew that the cult was still out there, waiting for the next unsuspecting victim to stumble upon their secrets. They were just happy to be alive and away from the cult.

Months went by, and June and Amy went on with their lives. But they couldn't forget about the cult and the mysterious structure they had discovered. They often talked about it and wondered if the cult was still waiting for them to return.

One day, June received a strange package in the mail. Inside was the ancient book they had taken from the structure. Along with it was a note that read "We know what you have done. You cannot run forever." June and Amy knew they had to do something. They contacted a historian who helped them decipher the symbols and writing in the book and learn more about the cult.

The historian revealed that the cult was an ancient secret society that believed in the power of the structure to bring about a new world order. They believed that the chosen one would help them to achieve this goal. June and Amy knew that they couldn't let the cult achieve its goal, they had to stop them.

But their adventure was not over yet. The cult was not just a small group of people, it was a vast organization with many followers. The cult's leadership would not be pleased with their defeat and would stop at nothing to take revenge. June and Amy knew that they had to be extra careful and stay alert for any signs of danger.

More stories from Sundar Azhwar and writers in Fiction and other communities.