Instructions Upon My Death 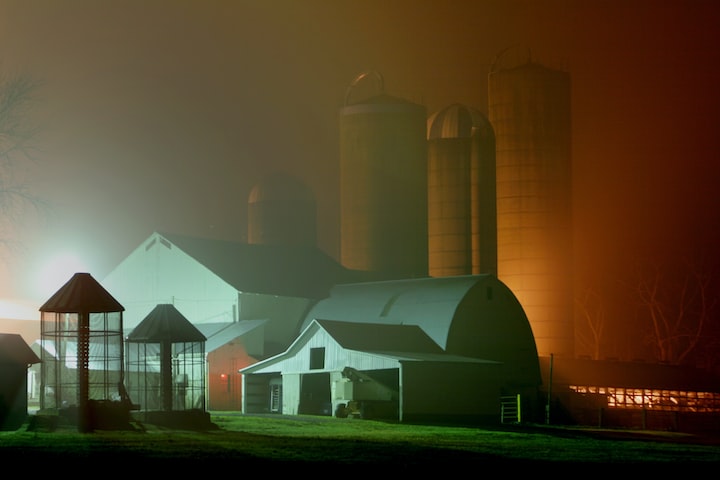 My Trusted Friend- If you are reading this letter, then I assume you got the brown paper package. It contains information and proof that needs to be in the public's hands, not the government's. They would suppress it. To understand the instructions at the end, you have to understand the beginning. I never wanted any of what happened. Our lives were very ordinary. We were a husband and wife with four children, living on our farm. We had a good life, and I loved my life. Until the green lights started.

At first, there was this green mist, not quite a fog. And it seemed to glow. We would see it hovering above the pond. Sometimes we would see its faint glow at the far end of the pasture. Always on the outskirts of the farm. We thought it was gas from some source, so we had the DEC come out and investigate. No pollution. No chemical runoff. No gas is being released from anywhere. I am sure they thought we were crazy. It continued like this for a few more months until it happened. IT happened.

I could see the barn from my upstairs bedroom window. One night as my wife was coming back to bed, she noticed a green glow outside the window from the doorway.

"Honey, look at the window."

I rolled over and mumbled something.

"Honey. HONEY! What. The Fuck. Is that?" she yelled with panic in her voice as she threw open the curtains.

I jumped up and looked at her and saw her face cast in a green glow.

Before she could even move, I had my boots on, threw a flannel on, and I was out the door.

"Get in the kid's room, bring the baby. Stay away from the windows." I was yelling as I scrambled out the door.

There was no way my mind could grasp what I saw. There was a wide ray of green light shining down over the barn. This black mass hovering above seemed to be the light source, but there was no noise—complete silence. I couldn't comprehend the size of this mass either. No discernable shape. It was just there. I felt like my perception was very off. I watched it for about thirty seconds, and then the light just went out. Still no noise, but I could tell the mass was gone. I stood there in complete disbelief. I questioned my sanity. Was I losing my shit? Something snapped me back. It was the absolute silence from inside the barn.

Why weren't the animals going nuts right now? I opened the barn door, turned on the overhead lights, and was stunned to see two cows gone and a missing horse. The gates to their stalls were still shut. Nothing in their stalls had been at all disturbed. As I walked down the barn's center aisle and looked in each stall, every animal was swaying, facing the back of their stalls. Still trying to process what I'm seeing, I decided nothing more could be done that night, so I went back into the house to tell my wife what I saw. The next day we searched the entire farm. Those animals were never found. We talked about going public about it, going to the sheriff. Who would believe us? It seemed like an outrageous story. We decided to keep it to ourselves. It is a small town, and we didn't want it getting around.

We tried our best to just put it out of our minds and get back to life as usual. For months, the glowing green mist was unseen. No more strange green rays from above either. I was still twisted by what I saw. I spent countless nights staying awake watching the barn. Eventually, things weren't getting done on the farm because I was consumed by what had happened. I spent our savings on a surveillance system for the house and the barn, set up in such a way that I could see the front of the house, the back of the house to the barn, the entire barn, and a camera aimed toward the back pasture. I had a view of just about every area of the farm. I began to sleep during the day and stay awake all night, every night. The farm suffered. I had almost no interaction with the kids or my wife because I was all consumed. My wife sold the animals and used that money to leave and take the kids to her sister's in Illinois. I was just watching my life fall apart as this incident gripped me at my core. After a few weeks of being alone and totally immersed in catching proof of this thing, I started questioning my sanity.

Then the green mist started to appear on the farm again. First in the woods, and the light would glow through the trees. That went on for two nights before the mist started to develop over the pasture. It formed at the same time every night, right around the time fog usually forms after a warm day. And then it happened. IT happened again.

I got up from the screens to get some coffee. As I turned from the hallway into the kitchen, a bright green light illuminated the house. It flooded in from every window. I froze for a moment and then remembered the cameras. I ran back upstairs to check the monitors, and everything I was seeing was showing up. I quickly stumbled back down the steps and ran into the front yard. I looked up and again just saw a black void. I couldn't see the stars, and it was a clear night. No shape. No lights or reflections except the green ray coming from the void. As quickly as it happened, the light was gone, and I could see the stars again.

I have watched the videos over and over. There is something else on tape #2. Something that I am not sure is altogether friendly. I didn't see them before the video, but they are there, and here is clear evidence.

The videos, along with blown-up still shots, are in the package I mentioned earlier, so now you know how valuable they are. Please, do not open the box and TELL NO ONE. Call the number listed at the end of this letter. He is a producer at a national news network. He will know what to do from there. The world needs to see the truth.

Thank you for being a dedicated friend and someone I can trust to follow these instructions.

"Hey boss, so a lead I have been working with has sent me a package. He insists it has proof of alien life and that the contents are only to be viewed by you." Jeremy said as he barged into the office.

"Oh Yeah? Do you know this guy? I mean, he isn't nuts, and this isn't going to be a bomb or ricin or some shit, is it?" He asked with an uneasy grin.

"No, no. He is a little bit out there, I have been communicating him for a couple of months, but he checks out. No history other than quietly living on his farm with his family. I'm just saying if it is up to me, I would open the package."

"Okay, Jeremy, throw it on that pile with the other submissions. I'll get to it."

He tossed it onto the desk with the other packages, and as he walked away, the brown paper package fell off the desk, hit the floor on its corner, and landed behind the office file cabinet.

Thank you so much for reading my work! If you would like to read more, my profile is here.

More stories from J. Delaney-Howe and writers in Fiction and other communities.