by Silas Woods 11 months ago in Short Story
Report Story 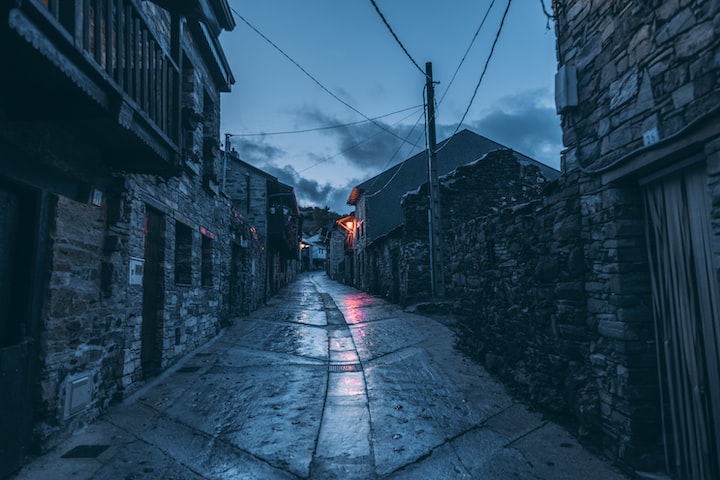 Photo by Daniele Colucci on Unsplash

Ron stares down at the cardboard box. His brother’s last name and last work location “CAMP 34” are scrawled on the front of the box. Several wet spots are visible along the sides of it and one corner of the lid is smashed in. Obvious mishandling aside, Ron finds the size of the box perturbing. He stops to look around at his own living quarters and realizes that his own personal effects, meager as they are, could (and will) be stuffed into an even smaller box than this one when his time comes. Shoving that thought into the background for now, Ron pries the lid off of the top of the box and begins unloading the contents of it onto his cot.

A crumpled up fatigue jacket. A black baseball cap with a bright yellow palm tree stenciled on the front and no other identifying words to accompany it. A plastic comb with almost half of the teeth missing from it. Three battered paperbacks, which are the treasure of the lot so far. Ron scans the titles, confirming he hasn’t read any of them, and adds them to the shelf above his cot before returning to the box. Ron pulls a smashed half pack of cigarettes and a lighter from the box, and shakes the lighter next to his ear to confirm there’s a decent amount of fluid inside sloshing around before pocketing it.

After sorting through another two layers of mostly broken, unusable junk Ron arrives at the bottom of the box, where there’s a pair of black, almost unused work boots. Grinning at the unexpected find, Ron sits on his cot and removes his own boots, which at this juncture are the polar opposite of unused, and places his brother’s boots on the floor next to them. His brother’s boots are bigger, but only slightly. Ron slides them on and stands up to see how off the fit actually is when something hard digs into his heel. He sits down hard on the cot and removes the boot, turning it upside down with his outstretched palm underneath it.

Something cold and metallic drops into his palm, and when he looks down, he sees a heart-shaped locket attached to a chain. The chain is long, but so thin it could probably double as floss. Ron grabs the chain and holds the locket up to his face to get a closer look and he sees it has a small hinge on the side of it. With a little effort, he’s able to pry the locket open, and a tiny rolled up fragment of paper tumbles out onto his lap.

Ron sets the locket beside him and carefully unrolls the piece of paper, seeing his brother’s last words to him in all capital block letters.

REAL GOLD. USE TO GET OUT. TAKE CARE OF YOURSELF.

“Say, partner. What you got there?” a voice says from Ron’s doorway. In two swift motions, Ron tosses the roll of paper he’s holding back into the now emptied box and drops a hand on the cot to cover the locket. He looks up and sees Jake, the leader of his work crew, leaning against the door frame and looking at him with narrowed eyes.

“Oh nothing. Just a bunch of my brother’s junk,” says Ron, sweeping a hand towards the box and the things on the cot. Jake’s expression relaxes a little.

“I was real sorry to hear about that, buddy. How long ago?” Jake asks.

Ron shrugs. “Not sure. Got the news about two weeks ago. His productivity number dropped. He’d been redlining for a while, getting older you know?”

“Yeah, I do,” answers Jake, all at once not looking that youthful himself. “Anything good?” he adds, his eyes drifting over the pile of belongings Ron has stacked on the bed.

“Nah. Well, some new boots and some smokes, that’s about it,” says Ron.

“Not bad.” says Jake, and his wandering gaze seems to stop abruptly on something. Ron’s chest tightens. If Jake has spotted what’s under his hand right now, he’ll have to kill him. He’ll hate doing it too, but it’ll have to be done.

“That’s a good jacket there, you should hang onto that. Military issue from the looks, it’ll last a lifetime. Had one myself, although I’ll be damned if I can remember what happened to it,” Jake says, pointing at the fatigue jacket. Ron reaches over and gives the jacket a pat.

“For sure. Clothes that last, what a concept, huh?” Jake gives him a laugh and then stands up straight.

“You said it. Listen, we rolled disposal duty tomorrow. Gonna be a long day,” he says. Ron huffs out a breath of irritation, a little play acting on his part since he doesn’t plan to be here to work his shift, or any others for that matter.

“I swear the system is rigged. That’s the third time we’ve rolled disposal this month,” he says. Jake looks behind him to make sure no prying ears are within proximity.

“Of course it is, kid,” Jake says, lowering his voice to a conspirator’s whisper. “Alanna’s on the redline as of yesterday and the more they dump on us the quicker...” he starts to add, but doesn’t finish the sentence. It’s an attempt to show a little sensitivity towards Jake’s recently deceased brother who, before reaching his demise at the over-ripe age of 37, had most likely walked down the same path their crew member is walking at this very moment.

“Anyhow,” Jake says. “Try to get some rest. I’ll come to get you at 0400, so we can grab some chow before we head out. You have dinner already?”

“Yeah, just got back, went early so I could go to the mail room and grab this stuff. It’s beans and baloney tonight. You might get a piece of bread if you hurry,” says Ron.

As soon as he’s gone, Ron grabs the locket and slips it into his pocket, his mind racing. He puts on his new boots, and after thinking about it for a moment, slips into the new jacket. Once he has it on, the infused odor of mentholated shaving cream and tobacco coming off the jacket seems to surround him, forcing a montage of still images and videos of his brother to play in his head.

Richie had been great when they were kids, a little distant as they’d trudged through young adulthood and had become so distant he’d been virtually non-existent when the world changed, due in no small part to the fact that their parents and younger sister hadn’t survived it. When law 233 had passed, a law prohibiting any direct family members from being in the same camp, Ron had been carted off to his current camp and Richie had hardly batted an eye. Ron hadn’t taken it personally. He hadn’t seen his disturbingly quiet older brother bat an eye at anything in years.

Now, clenching the locket so tightly in his fist it’s forming an impression in his palm, he wonders where the locket had come from originally. He wonders how the locket had made it through the heavily scrutinized mail system without being detected and confiscated, and above all else he wonders why his brother, who struggled to stay just a hair above the red line of death for months hadn’t used the trinket to escape into the Wastelands himself.

“These are questions to ponder on the road,” Ron scolds himself and leaves his room for the last time, doing calculations in his head. He should be able to stroll right out the front gate with little to no hassle; the guards posted there were there to keep things out, not in. If you wanted to wander out into the destroyed city and starve to death or become a quick and easy meal for one of the radiated monsters roaming around out there, well, that was just fine with the powers-that-be. It would save them the trouble of waiting until you drifted below red line.

Ron knows a fairly safe path from here to the nearest post. Had memorized it during one of his crew’s disposal runs. Just lately those had been plentiful, and the information in his head is reliable and fresh. If he gets past the gate, if he manages to avoid the stray crawlers, and if he makes it to the Black Market Post... The gold in the locket will be enough to get him a meal, a room, and a weapon. With these three things in place, the closest thing to freedom that exists will be within reach.

Ron makes his way down the staircase, outside the building and makes a beeline for the gate, knowing that he will have to pass the chow hall and Jake will probably see him and wonder what he’s up to when he’s supposed to be resting but doubts the old man will stop in the middle of his meal to come find out. Ron strolls, attempting to look casual and begins to whistle as a different ending than the one he’d resigned himself to beckons.

More stories from Silas Woods and writers in Fiction and other communities.