Changing time with just a ship in a bottle? 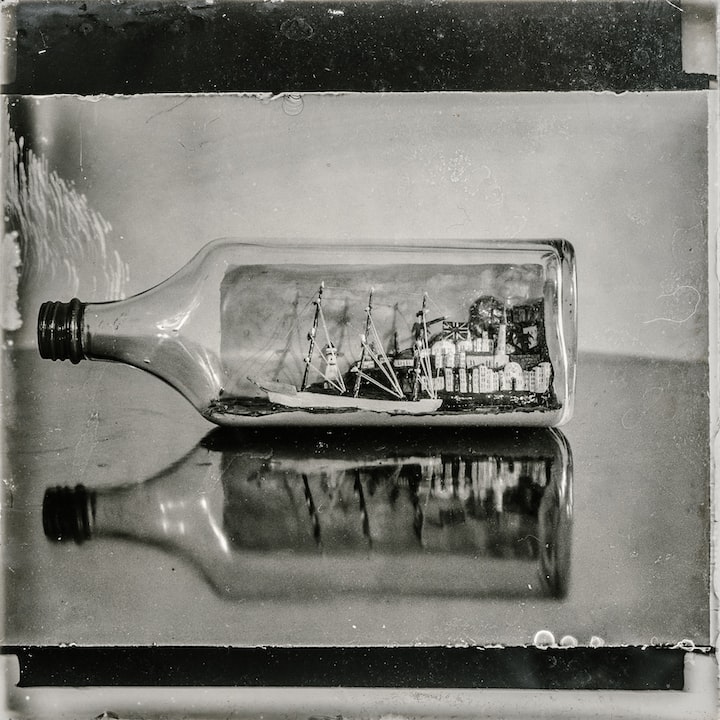 With heavy eyes glassed over from work the night before, I picked up the bottle off the shelf where dozens upon dozens of unfortunate historical events sat still.

In quiet plastic waters, the replica of the Titanic rocked back and forth against the deep blue of the tint of its aging bottle. Written in cursive on the side was yet one faded statement in golden ink: “Ship of Dreams.” If I were not so trepid, I would have stuck my metal tool inside to fix the cracks down the middle. Changing the past would be nice, but mother told me to leave it be.

”We must never touch what has been done. Only record and observe.” She would say.

“I know, keep the memory alive.”

The bottles were dormant, but any disturbance could altar the events of time and space as we now know. My mother and I are the keepers of the past, while two other groups of watchers keep track of the present and future. Its a quiet job, but it does becoming draining to watch them all remain frozen in their tragedies.

I sometimes think about how I could pick up a bottle from the 1800’s and mess around with the events of The Industrial Revolution. Maybe World War II wouldn’t have happened if I stretched my hand into the glass and created new winds.

I could change the pain of war and of slavery. Famine and sickness would cease to exist. Everything could be made new for the humans suffering at the hands of the real world, and none of their anguish would even be necessary. However, my life sentence has been made up already. It is absolutely forbidden to touch the contents of the past in the glass bottles. You can only look, record, and make sure they remain unchanged.

Humans must continue to suffer through both their triumphs and losses, while we must simply keep watch. Document. Observe.

It really does pain me to see them this way. All this death and destruction, when I could help.

I looked out the window at the ray of stars glistening around, with Earth’s quiet blue atmosphere glowing from a close distance. It was so beautiful, yet it made me feel this growing sadness that would take over my days and nights at home. Mother would try to train me on proper record keeping, but I could not stop thinking about how much life would be different if the watchers stepped in.

”Today you will be learning about the magic of the bottles.” Mother stated this with a hint of glee, which differed from her usual monotone commentary.

“What kind of magic?” I asked with an air of suspicion.

“If you tilt the bottles and use your sculpt tools near the skylines of each scene, you can slightly change the weather if it doesn’t match with the past forecast of that day. The weather is the only thing that fades within the bottles, and we must keep it consistent.”

I paused. I didn’t want to ask about additional changes, but I figured I would return to this later. For now, I would just begin my readings on historical events in order to make sure they are accurate in the bottles.

Letting out another troubled sigh, I picked up articles on the Titanic again to begin my studies.

“It was the largest liner in the world at the time. For a short while.”

My pen began to scribble again. I checked the bottle, and remembered the crack down the middle and the ocean debris overtaking the main deck. If you put your ear to the opening of the bottle, you can hear the soft orchestras and the Atlantic combining together in an unfortunate tune.

This particular event had struck a nerve deep within. I didn’t want to read anymore about the people, the icy waters, or the deafening silence of the sea that early morning after the crash.

It was all too much. I was growing weary of human suffering.

Maybe…just this once..I can change things.

Taking the bottle in my hands again, I peered through to see the lonely ship cut in two. It didn’t sparkle the way it did when it left its home shores on April 10th, 1912.

I took out my set of tools and old pamphlets on changing the contents of the bottles and began to work. Making sure Mother wasn’t around was tough, but luckily she had taken herself to bed which would give me enough time to finish this job.

With one long needle, I started to sew the broken ship back. Using my materials, I created a replica of the Titanic. Brand new, and in tact to replace the one that had been broken. I breathed into the bottle, to give it new air, and removed the tiny iceberg from its path.

Mother awoke immediately, startled by the shifting timeline. She had felt what had been changed.

“What have you done?” She asked me, with a look of sadness I had never seen before.

Looking out the window, I saw the Earth change and shift. There were different people alive and born, with more tragedies that expanded onto the next. The watchers in the present and the future visited us immediately, baffled at the timelines that they now had to fix.

The elder watcher of the future was here within minutes, checking records and displaying our visions for the humans in mid air.

“You must change it back to the way it was. This mistake of yours will take us a lot of work, and this has ruined human development. Due to this error in your nature, you can’t become a watcher. That must never happen again, is this order understood?“

“Begin the process immediately. We will return soon to ensure our timelines are set right again.”

I looked at the beaming ship one last time, and saw happy people dancing. They saw New York in the horizon.

I will change it back.

ghost with a keyboard ~

More stories from Kyra Lopez and writers in Fiction and other communities.