I Need A New Robe Belt

A woman struggles to keep her robe closed while watching a rocket launch from her rooftop patio. 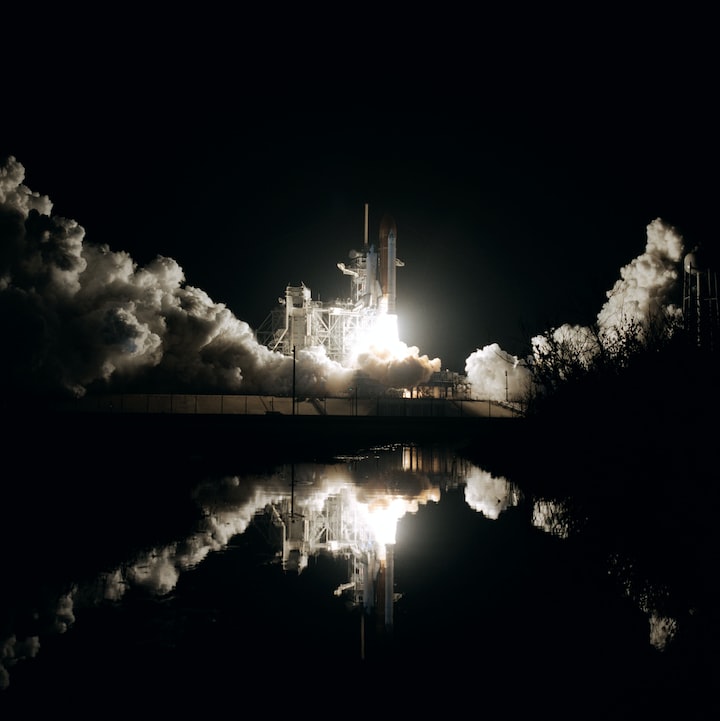 A bold wind blows in off the ocean, fluttering my silk robe open. My fingers clutch at the edges to pull it closed, its usual radiant red dulled to a dried-blood brown in the silvery moonlight. Other than the twinkling satellites in the night sky, the only illumination is the distant logo broadcast into the clouds. An eyeless, glowing smile looms overhead. It was intended to inspire happiness. Instead it conjures a sense of foreboding deep within my gut, as if I’ve been poisoned, promising a slow, painful death. Like that of our planet.

But not for long.

My chest squeezes at the thought; a sense of both panic at what I’ve done, and hope for what it might mean. I force myself to breathe. My fingers abandon my robe to grip the balcony railing, allowing my bare breasts to be kissed by the salty night air. I steel myself, looking across the endless horizon, my rooftop view providing an uninhibited panorama of the small coastal city I call home.

A widow’s walk, they called it; back when women used to watch the sea for the return of their sea-faring lovers. I’m no different, though it is the endless depths of space my lover braved. In one hours’ time the sky will alight with a rocket, my wife meant to be in the captain’s seat. I used to laugh at the phallic design. My wife explained to me multiple times how it is purely for aerodynamics and its phallic nature is unintentional. I still think Bezos just wants to fuck the sky. Since the wars of 2042 I dared not even lift my lips in a smile at such a joke. Now I smile openly, with no-one around to witness my heretical display.

Soon we may all once again be able to smile openly; a genuine contrast to the gaudy, insincere logo shining above.

When Lord Bezos won the technology wars and took control of the world, the citizens were glad. Glad. Everything became so efficient, so streamlined, so convenient. We gave up all our freedoms for convenience. Consumerism won out over personal independence. Anything that could not be bought or sold became worthless. All rebel technology was ingested by the Amazon machine and spewed back out with that same smiling logo, all features considered arbitrary removed. No more farting cars. No more joy.

Thankfully, some technology escaped and thrives in secret. I trace the edge of my implant fondly, hidden beneath my hair, barely noticeable. My wife’s always assumed it was a mole and never inquired further. If she had, I wouldn’t be here right now. If she had, she’d still—

No. I shake the thought from my head. I’m here for a purpose. It’s all been planned from the beginning.

But that doesn’t mean there hasn’t been love.

She had been chosen by The Algorithm from an early age to receive extensive training, from which she excelled. At only thirty she was Selected to pilot rockets for long-haul missions. I remember the day she was Selected with perfect accuracy, how I’d intentionally tripped into her, spilled wine upon her suit, insisted I clean her up myself. Concealed within a quiet corridor, white linen napkins and sparkling water turned to fervent kisses, smeared lipstick, disheveled hair.

After we married we looked at many houses, but she chose this one. She told me I could watch as her rocket launched into space, and several months later, watch it parachute back to Earth. Then we would be reunited.

I didn’t tell her she would never make it to her post.

My love for her was great, and it was true, but it is nothing compared to the love I have for my planet.

My Neurolink blinks awake; the implant hidden beneath my scalp resurrecting after months of dormancy. A screen invisible to all but me lights up the air in front of my eyes, blocking my view of the ocean and that haunting logo I despise.

My breath catches in my throat and my heart shudders to a stop. It’s not my contact from The Rebellion, as I was expecting… but Daddy Elon himself.

I’m pleased to see that his time away from the sun has been kind to him. “Is it finished?” he asks.

“Then your assignment is complete. The Rebellion is in your debt.”

The faint smile he offers is worth every risk. Every sacrifice.

As quickly as he’d appeared, he disappears. I’m left alone with everything I’ve done, looking out at the endless ocean, the sun beginning to peek over cresting waves.

The rocket launches on time, despite my missing wife. Lord Bezos would not allow anything to deter him from being timely, not when it’s his much-anticipated departure for Mars with his concubines. Only my wife knew this rocket’s command perfectly. No replacement would suffice. Still, I’d convinced her to spend one last night with me before entering the vast coldness of space.

The rocket lights up the sky in brilliant whites and oranges, steam from the ocean billowing in giant clouds. Then, while the world collectively holds its breath, the rocket begins to wobble, then falls back towards the sea.

I gasp, but force myself to watch as it plummets back to earth, bursting into a raging fireball upon contact with the ocean. The blast from the explosion flutters my robe back open and off my shoulders, leaving me naked. I force my eyes to remain on the burning debris as the rest of the city wakes up and absorbs what has happened.

When the fire fades and smoke is all that remains, I abandon my silk robe on the white-painted floorboards and descend back into the heart of my home. Heart pounding in my ears, my vision is pulled towards the bedroom where she lays, forever unmoving. The belt of my silk robe is tied firmly around her neck.

I'm a romance and comedy writer from BC, Canada. My debut novel (Not) Your Basic Love Story came out in August, 2022. Now represented by Claire Harris at PS. Literary!

More stories from Lindsay Rae and writers in Fiction and other communities.