An Unexpected Journey with a past lover sometimes even Considers another fate... 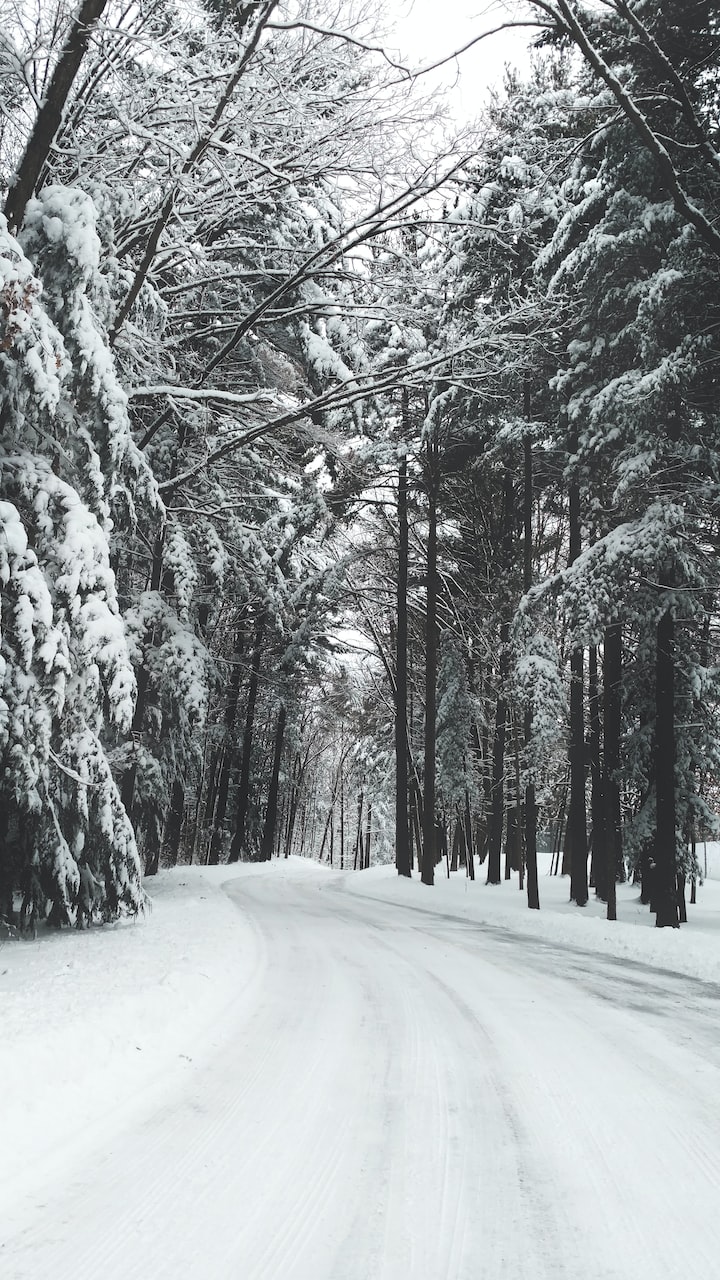 Photo by Emily Toycen on Unsplash

"We drove up the snowy, winding road towards the cozy A-frame cabin."

I knew that I needed this Break but I shouldn't be here with Him. What if he strikes a Change and decided to abuse me out here alone in the snowy Dunes... Who will then come and Stop him or check on me?? I was nervous around him but I Looked calm and cool. I smiled slightly more so that he feels he has my attention. I stared out the window into the Face of the Cabin it seemed miniature. I couldn't concentrate my thoughts because he was still blasting music and Shouting outrage Lyrics to N.W.A

Yesterday on the phone with my mom had really struck a nerve with me… of course I was drinking, How else would I be dealing with this current Trauma.

Shamel became abusive after he got his record deal… Yes I was happy for him, but he started to Drink more and party A lot without me… I wanted to call him out but I didn’t know how, and Everytime I tried to talk about things he would start an argument usually it always ended Physically. The neighbors took me to the Hospital one day after he made me have an asthma attack while giving me a swollen eye and a Busted lip. I begged them not to tell my Mom and Miss Alba just said she will pray for me…

We split up for a few weeks but Shamar just came back in town and he said that he had planned a Trip Just for us, This Christmas weekend. He always seems to find me, and we get back together, but 1 time we split up for a month and I started talking with this guy it was very strange because Shamar lost his temper when he found out and I never heard from the Guy again also Shamar forced me to move back home but he said we weren’t together anymore…

I quickly pulled my seat belt off and swung the car door open... Shamar wrestled with the luggage in the rear, Holding both Bags in his hand he stomped through the Snow heading toward the Cabin...From walking next to him I watched his jaw clench as he seriously scanned the boundary before dropping the bags on the Small Box structure porch... He twisted the nob and opened the door.

I was surprised by the Beautiful architecture and layouts the warm cranberry color settee in front of the Fireplace, the smell of the wood, and the Cozy enclosure made me release a sigh of relief. Shamar looked at me and said, “yup, I knew you'd like this”.

I almost always flutter when he does that movement with his eyebrows and he stares at me and winks... Through all the pain he still had the power to, Tickle my Heart.

He embraced me in his strong arms and kiss my forehead three times...I didn't hug him back I just stood there with my arms wrapped and laid my head where I could feel his heartbeats.

That afternoon was Beautiful we took naps from the morning arrival... I gave both of us a pedicure and manicure (looks like my 20 hrs of Beauty School helped a Little bit)and we laughed hard out loud watching “Christmas with the Kranks”.

I heard chuckles from outside, Shamar said maybe we have neighbors arriving before the weekend extravaganza!

This Evening I was making Lasagna and then we would spend time outside In The HotTub with Champagne 🥂 🍾.

I stood on the deck as he slowly faded away into the whiteness of the Snowy Night.

A news announcer spoke loudly over the monitor insured that no one takes advantage of the roads until further notice but I couldn’t warn Shamar because he left and hadn’t returned my call.

The neighbor came across and Shouted “Are You Okay” I guess he seen me pacing around the Front Porch of the cabin. I couldn’t hear him with the whistles of the singing wind and the furries of snow seem to be getting thicker… He seems familiar and before I could see him the porch collapsed I couldn’t hear or see anything but when I awakened I was laying down on a quilt that smelled like Gingerbread. I was Comfortable inside this Dream, Only it wasn’t a dream and I was startled by a Deep chilled voice from the stairwell saying are u okay and I never seen your husband return I hope he’s okay!

“I can’t believe I was sleeping for hours,” I said while trying to get up from the bed placed by the small fire in the front room of the cabin… “ oh no today is a new Day, and it’s almost going to be the Afternoon”. “What?!, where am I!! What’s going on here? What happened?” I shouted as I galloped off the Bed in search of all my luggage that I Didn’t have.

When I finally seen this man I couldn’t believe my eyes, he just sat next to me on the Bed handed me a cup of tea and sat with me… we both said nothing for 5 mins…

My Ex Boyfriend from 7 years ago, it wasn’t until we split that I met Shamar… One time I ran back to him but eventually I was still under Shamar's Love spell so I Left James and went back to Shamar.

James had wanted to protect me and keep me to himself but I was Confused and Convinced that Shamar could change… I never forget that moment when I walked out while James Laid There sleeping, Maybe Dreaming About Protecting Me…

I regretted that Decision Every Night.

“How did you get here?, I mean where did you come from?” I asked questions but was to startled by what has happened… James Rubbed my Kneecap and spoke softly “I didn’t know it was you until I dugout that Snow pit you fell inside and Carried you over here”…He studied my face for rememberance but I didn’t remember a thing… “what happened to the cabin?? I declared and my Stuff??”

He took my hand and guided me towards the Tiny window I seen white everywhere… The Snow almost covered the whole Cabin.

“There was a Terrible Snow storm I lost my Dog when I Found you inside the Snow pit… we were playing in the snow but I seen you pacing on the porch hours after I seen that car pull away which I assumed was your Husband. I stopped him and I said that’s not my Husband he stared at me for what seemed like 3 hours and he spoke with disgust “ Was that Shamar?” Shyly I said “yes” and he moved away from the conversation and asked if I wanted more Tea?”

I flopped onto the Cranberry settee, the same as the one in our cabin, I studied His dominance as he fixed the tea... James was a Gentle Giant I Loved his Nurturing.

James walked over to me and spoke with concerned regards “Alexander, why are you still doing this to yourself with this guy??”

I said nothing but instead proceeded to blow at the hot Tea and peek lightly with small sips.

He continued to speak in a low manner... I never stopped thinking about you, you're the star of all my daydreams Lexii.

I burned my lip on the hot tea and I guess I made it too dramatic because he fumbled with the remote control and moved to my side... Without hesitation, he blew on my lip and kissed me... My eyes were sealed and My conscious told me not to haul just let him Kiss me... Our Tongues were like magnetic resonance My Heart started calling for his Passionate dexterities... He swarmed over me halfway as I rested my back on the Cranberry Love hub... I wanted him to Kiss away my Apprehension and Make Love to my Ego!

I knew I should be trying to make contact with the headquarters of this Camp to make sure that Shamar was Alright, so I attempted to make the Magic stop but James swooped me up from the small settee and carried me out by the Hot Tub on the inclosed small Sundeck...

Dipping my Body into the Hot wetness was easing my Stress away James enter with his Brown Basketball Athletic Body. Our eyes met and we both changed positions and Shared a Kiss. I wanted Wine but I was satisfied with his lips for currently... He Rubbed my Feet and caressed my toes I let out a soft moan... All Night!

My cell phone was making a noise I looked over and Didn't catch sight of James standing by the window.

Our phone had no signal... Not anyone had come to inspect the road or check on the guests at the Camp!

James and I stood in this “A-Framed Cabin” Covered with barricades of Snow and no signal Thankfully He likes To Eat we had Plenty of Food for the remainder of the Time. I couldn't believe I spent the whole weekend Trapped in a Cabin with my Ex...

I didn't get my Luggage back But we got found by the rescue squad... James didn't let me get away this time, he had it out with Shamar and succeeded! I said nothing because my demeanor was blasting, all was understood.

More stories from HandsomelouiiThePoet (Lonzo ward) and writers in Fiction and other communities.