by Leigh Hooper about a month ago in Short Story 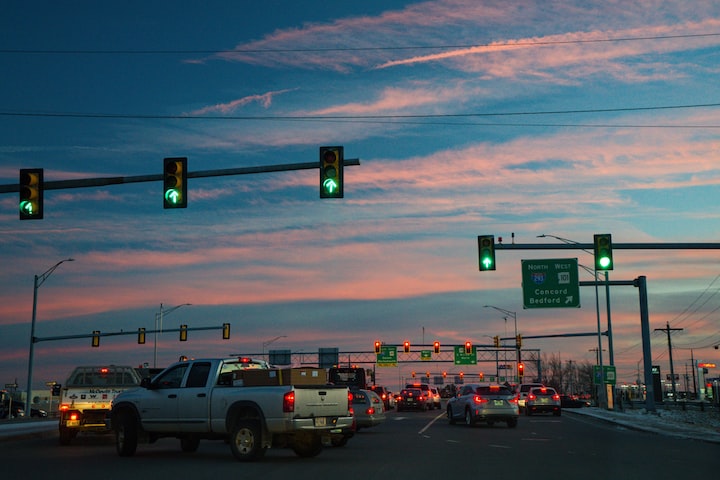 Photo by Ken Wyatt on Unsplash

That night he hated green lights.

He hated the way it meant he had to keep driving, and every green light was like a punch to the face. He winced as he kept his foot on the accelerator, but kept his speed under the limit just so he had more time with her.

She didn't speak a word during the car ride home, and he didn't blame her. He knew she was crying, and the guilt inside of him broke his heart as much as her silence did.

The couple had gone on a date night in efforts to fix what they knew was already broken, and he had broken up with her before the main meal even arrived at their table.

"We'll take it to go." He had said, and they waited by the front of the restaurant for the waitress to bring them boxes of semi-cold food. They waited together, but separate.

Now, he cursed at every green light. Not aloud, of course, because her silence had caused his tongue to feel too large in his mouth. Every word seemed to get stuck in his throat and nothing seemed to clear it.

He believed it was a classic case of "right person, wrong time". As he glanced over to her in the passenger seat, he didn't mind that her arms were crossed, and that she was staring out towards a city that was sleeping. His heart still skipped a beat when he looked at her, and he wanted nothing more than to keep his eyes off the road.

But, he had to keep driving. And finally, in the heart of the city, he hit a red light.

He wished that red light had stayed red forever, but even as it turned green she still hadn't said a word. So, in one final hope, he took the long way home. It would take an extra twenty minutes to reach her house now, and he prayed that more red lights would follow. Every red light was a gift, a gift that made their ending even more bittersweet.

It didn't take her long to figure out his plan, because finally she spoke.

"You're taking the long way aren't you?" There was a tinge of amusement in her voice. The pair of them often drove this way after a date night, just so they could spend more time together. That night was no different, but he wished the long way had gone all around the world and back, just to be with her that little bit longer.

"Yep." He replied with a tight smile, grateful that when he looked over at her she was looking right back. They came to another red light exactly in that moment. The red cast a glow on her pretty face, and when he caught her smiling at him, she turned away. Composed, she looked back at him.

He let out a short laugh, not being able to deny that he deserved to be hated. "No you don't."

The light turned green, and her eyes sparkled. They were still glassy from her tears, but at least she'd stopped crying. He drove on, knowing how close they we're getting to sharing that car one last time.

"Think of it as goodbye for now, not forever." He shrugged, hoping the suggestion seemed fair.

"You know I'd rather not say goodbye at all."

Her words cut deep, and he already knew that the wound would never heal. He'd have a permanent gash right in the centre of his heart, threatening to bleed out every time he glanced at her.

As the left the city towards her home, they passed the last traffic light. It was green, and it shone brighter than the rest. It was a beacon, perhaps for hope or perhaps for closure. Either way, he cursed as he drove past, and this time he cursed aloud.

This is my sixth SFS Challenge entry, and you can read my fifth entry for the Raging Bull Challenge here:

Receive stories by Leigh Hooper in your feed
Leigh Hooper
Read next: The Sun Will End Us