Finding the Future in the Past

Where has Vulcan Gone to Play? 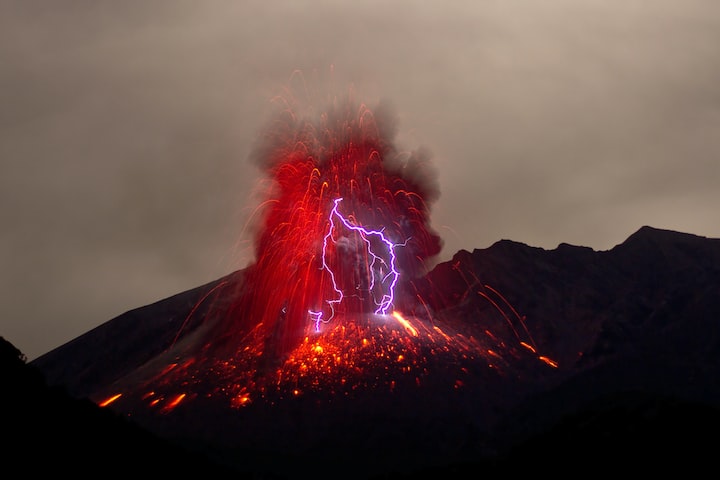 Photo by Marc Szeglat on Unsplash

No one can hear your screams in the vacuum of Space. Or at least, that’s what they say….

Vulcan is the Lord of the Fires of the Heavens. No wonder he made his abode so close to the mightiest Star we humans have ever seen. Yes, the Sun is thought to be the greatest celestial object within our own solar system. This is far from true, however.

Mankind has forgotten the mightiest Lord of the Fires. The Titan who brought the flames to mankind so very long ago. Before the lesser gods came to be, the Titans ruled the skies, land, and everything in between.

Vulcan is the greatest of the Titans and the Lord of all Fires in the sky and upon the land. Vulcan can hear the screams in the Dark.

I close the book I was reading on our veranda. The poet, Vissilivus, writes so eloquently about the ancient deities. I remember the celebration of Saturnalia our village finished last week and considered how eloquent people prostrated themselves before the ancient Titans.

The Titans are so often perceived as the oppressive ancient deities, and the new gods are the ones who brought us civilization. However, some believe the Golden Age before Zeus was the time of prosperity and freedom.

My old friend Collanus of Gaul used to tell me of his people, the Galatians. He was a tradesmen who would frequent the shores of Syracuse, my homeland, bringing with him legends of a wild people in the forests of the North. These wildmen are known as the Keltoi to us in Greecia and they are terrifying.

But, when I think of the Titans who came before the gods, I remember what it was like to be free. Before the oppressive hand of Zeus fell upon us. Not all chains are bad, but not all safety is truly secure. Especially for us mortals.

I finished my wine and closed the book on my lap. I place my glass on the windowsill for the cleaning golem to come and claim. I gaze out over the rolling hills of the countryside veranda and think of the city to which I must return tomorrow. Sighing, I watch the miles and miles of wheat dancing across the grounds.

I tighten my toga to return to the main center of the house as Borgus enters from the side entrance. The stoney creatures we named Golems after the Judaic people's legendary creatures always bore a wide smile. Borgus was a prototype of the automatic cleaners my friend Archemides gave to my family as a gift over 40 years ago.

I was only 6 at the time, but I remember the day well. My father was speaking to his colleague through the magic mirror. He was angry that his colleague wasn't listening to him.

Just as the communication ended a strange man with a long gray beard and a white toga entered our villa. I jumped up to leave, but the man gestured for me to stay. He had a far away look in his eyes, but I knew he could see everything. He was a marvelous creature to behold.

"My name is Archmedes," the man announced to my father, not waiting for my father to welcome him. "I come to you at the behest of the king."

"I know you," my father answered with a slight look of awe in his eyes. "You're the magician. You are the one who discovered how to bring fire through small strings so that our homes have light and warmth."

"I am," Archimedes told him, his face unchanging. "I found Zeus's greatest secret, the lightning bolt, and I've brought it here for people to use. But, this is not why I'm here today, good sir."

"Please, tell me your business," my father said, apparently still unaware that I was in the room.

"The king has commissioned me to build a second Syracusia," Archemides announced. I stifled a gasp when I heard the words. I could tell by my father's expression that he was just as shocked as I was.

The Syracusia was a ship, unlike anything the world had ever seen before. It was over 30 parasangs long and could house hundreds of people, horses, and machinery. I could not envision a more magnificent structure sailing across the seas.

“That’s, that’s incredible,” my father gasped, at last finding his voice. “The Syracusia has sailed all the Mediterranean, Atlas, and the coasts of Asia and Africa. And it has heated baths, running water, and the power of Zeus to light the ship. What type of structure could you be creating?”

“Are you familiar with the famous hero, Jason?” Archimedes asked.

“Of course,” father answered with a baffled expression. “What resident of Grecia is not familiar with the tale of the magnificent hero?’

“His ship,” Archimedes stated firmly. “What was the name of his ship?”

“The Argos,” Father answered. I shared his baffled expression as Archimedes stared into oblivion.

“Pray, tell,” father rested his chin on the top of his folded hands and watched the face of the old crazy man.

“Wait,” father asked, rushing to the old man. “Astron. You mean, they will sail the Astrons of the heavens. They will commune with the gods? The priests do this, Archimedes. The gods will never permit your ship to sail their abode.”

“Will they not?” Archimedes spat in rage. “Let them tell me this. I will hear none of it! If the priests commune with them through the Oracles, why should we be forbidden to sail above into the watery skies? Poseidon does not forbid us to enter the seas, why should Zeus forbid the heavens?”

“But, Ikarus,” father stammered. But, before he could say more, Archimedes growled.

“Pish-posh!” Archimedes responded. “Ikarus was a fool! His measurements and mechanisms were all off! You cannot fly to the heavens with bird feathers. Have you ever known a bird to land on the Moon? Of course not! They can’t. The Syracusia II will be able to! But, that is not what I seek.”

My father could only gulp and continue to listen to the madman’s ramblings. No one could argue with Archimedes, though. He captured Zeus’ lighting and brought it into our homes. He built the Antikythera mechanism for tracking the stars and seasons automatically.

By all measurements, he is a Magi! However, I know he always denied these claims and said he was a man of science, not magic. But, only the most skilled scientists and mathematicians seemed to comprehend his random musings.

“I’ve never seen a bird on the moon, sir,” my father mumbled.

“Neither have I,” Archimedes snorted. “And this is because birds cannot live in space. In my recent experiments, I’ve used various animals to test the environment up there, revealing it to be hostile to life. When I sent up rabbits, rats, and other rodents up to the heavens in baskets using hot air, they fell back down to Earth, dead.”

“Because Zeus does not wish this to be so!” father exclaimed.

“Stop it with your obsessive fear of the bearded one,” the madman chortled. “It is because there is no air up there. I can tell because their lungs burst. This means, we need to have a special pressurized structure and only send up 1 or 2 humans.”

“Who will guide your vessel through the heavens?” my father asked. “You can’t man a ship with only two men!”

“You speak of Judaic mysticism?” my father’s interest seemed piqued.

“I do, but there is no need for magic!” Archimedes announced. “I need someone to test my creation. Will you house and train my auto-man?”

“Yes,” the scientist grinned. “This being will not require air and food as you and I do. And they will be made with stone to withstand the pressures of heaven. But, you must help me train them to be prepared for their journey to heaven.”

My memories started to fade after this point. My father could not deny the madman, and so I grew up with Borgus. The auto-man made of stone. The dream of soaring in the heavens seemed to fade when Archemides passed away 10 years ago.

The Syracusia never sailed upwards past the Moon to the abode of Zeus and beyond! But, I knew the old man certainly had it built someplace out there. This morning a young woman appeared on my doorstep, claiming to be Hypatia of Alexandria, and stated she found the Syracusia II.

Now, tomorrow we travel to the shores of Syracuse to journey to her homeland of Alexandria Egypt. It’s a fool's errand, but Borgus and I have dreamed of the Golden Age, the Titans, and the home of the great lord, Prometheus.

Prometheus is called Vulcan by our Roman neighbors, and he is the lord of fire. He is the one who brought us, humanity, the spark of the first flames. This flame kept us warm when we were mere cave-dwelling children. Now, we are men and must pay our respects to the Titan.

“I’ve seen his throne,” Hypatia told me when I sat her down for some wine. “His throne is the closest to the Sun. Even closer than the lord, Hermes. If he is the one you wish to see, then this is where you must go.”

She spread a stunning map of the heavens out on my table top. Every single star we could name was featured on this tapestry. Nearest to the Sun’s brilliance was Prometheus, Vulcan, the lord of all fire on heaven and earth.

“We leave at first light tomorrow,” I had told her. Now, it was well past midnight, and I was unable to sleep. The thought of soaring the heavens was far too exciting and frightening to sleep.

I really hope you enjoyed this entry for the New World's challange! It was inspired by the line from Star Wars, "A long time ago in a galaxy far, far away."

I thought, why not explore what the world would be like if Archimedes had access to the technology of modern man? Many modern historians believe historcal figures such as Archimedes, Lady Lovelace, and Hypatia could have advanced much further if technology was caught up to them!

So, I created this first chapter for the sci-fi challange.

Some notes for context:

Hypatia was an ancient Greek mathematician who many claim rivaled Einstein in brilliance. You can read about her here: https://www.smithsonianmag.com/history/hypatia-ancient-alexandrias-great-female-scholar-10942888/

For centuries, astronomers, mathematicians, and other experts discussed the planet Vulcan. Vulcan was named for the Roman Titan of fire, who is named Prometheus in Greek. According to ancient scholars, his planet was said to orbit the Sun between Mercury and the Sun.

You can read about this mysterious planet here: https://en.wikipedia.org/wiki/Vulcan_(hypothetical_planet)

Also, please check out Rooftops of the Solar system's video on YouTube: https://www.youtube.com/watch?v=s2WF0KsB4ww&list=PL2d9m95LG0iIerPuipFgNFgH5_XqnCAmK&index=5

Here's an awesome video about the great, Archimedes: https://www.youtube.com/watch?v=4YgsvITe7IU&t=500s

My goal is to create a fun story about the Ancient Greeks journeying to the sun long before we set foot on the Moon :)