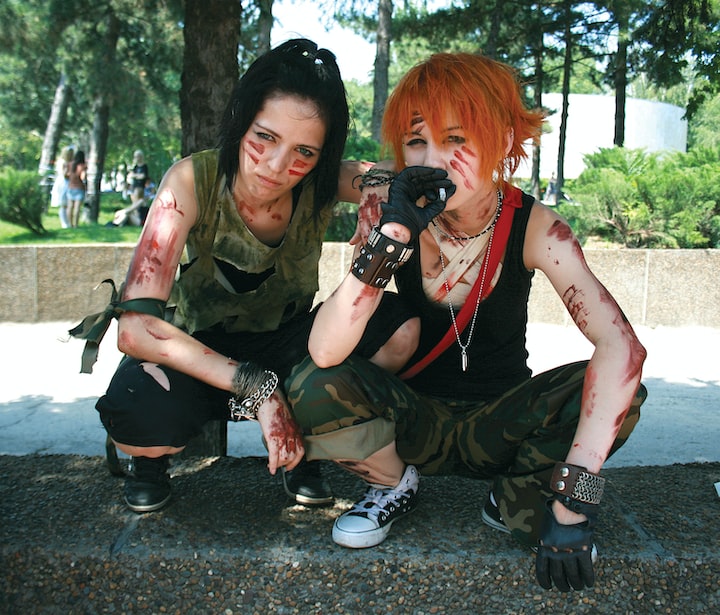 Photo by Ekaterina Novitskaya on Unsplash

The houses glowed like embers, their windows lit up like little sparks of flame by the rising sun. They looked so peaceful, so safe on the mountainside. As if Mother Nature herself was protecting them. But Jemima knew better. She knew that most likely, those little flames, their windows reflecting the sunlight, would be empty, abandoned, or if not abandoned, that the occupants would be dead. Sometimes she imagined where the dead might be, would they be asleep, all tucked up in their beds? or would they be stretched out on the couch, or curled up in a chair, the TV still glowing, the characters and people on the screen moving forever, or until the power went out, without anyone to turn it off.

She stood, looking out the windows of the top floor of the office building, towards those little flames on the mountain. Out of habit, she glanced at her watch, but it had stopped working a while ago. That was okay. You didn’t really need your watch to tell the time. And time wasn’t really all that important anymore, anyway. The only time that mattered was day or night, but even more importantly, the time in between the two – dusk and dawn. That was when they were most active. Like ferrets, or hamsters.

Jemima had been one of the lucky ones. If she hadn’t, she’d be dead too, just like pretty much everyone else she knew. But she wasn’t just lucky, she was smart. That’s why when her and all the other students in her class, along with their teacher, had come back from their camping trip to the lake out east to the sound of emergency sirens wailing, and plumes of thick smoke rising and swirling into the sky from so many areas, that the words that her father had told her came into her head, without her even really thinking about it. “Get to higher ground,” he’d told her. “No matter what happens, that’s the first thing to do. Get to higher ground. Go up. And from there you’ll have a vantage point, you’ll be able to assess the problem.”

Jemima remembered the one question that popped into her head. “What kind of problem?” Her father had shaken his head. “It doesn’t matter. Any problem. Fire, tsunami, earthquake, riots, anything that’s a danger. Rise above it.”

So when their class had driven back into the city, amid the smoke and chaos, at the first opportunity, Jemima grabbed her backpack that was full of survival supplies from the trip – two leftover water bottles, a handful of energy bars, a sleeping bag and pillow, a first aid kit (she was always prepared), and a small Swiss Army knife in a pink camo pattern – and jumped out the van when it stopped at a set of blinking traffic lights at an intersection. She ran, sprinting, for the one place she could think of. Not home, that wasn’t high enough, with only its two storeys. She headed for the place where her father worked. It was the weekend though, the survival camping field trip being overnight on Saturday. Out of the corner of her eye she saw movement, people moving – some running, most walking with a strange, disconcerting shuffling gait. She heard screams, and crying, but she ignored them, and ignored the uncomfortableness of her bag as it swayed from side to side on her back. She reached the large glass doors without barely being out of breath, and for the first time, Jemima was glad that she was on the track team at school. She yanked the doors open and ran to the wall of elevators in the shiny floored lobby, her sneakers squeaking ear piercingly on the tiles. She jabbed the button with a finger. Nothing happened. She jabbed it again. Out of the corner of her eye she could see shapes, people moving outside. And then she noticed the thin slot next to the button. A card slot.

“Dammit,” she cursed. The elevator required a key card to operate. She moved past the elevators to a stairwell and turned the round silver knob. It moved and she pulled the door open with a sigh of relief. She started up – at first taking the stairs two at a time, but by the time she reached the seventh floor she was struggling. She went stair by stair now, but still moved quickly. Six more floors, and then she’d be at the top. Lucky 13.

She pushed open the door at the top and walked into an open plan office – desks and computers sat in groups of four. She headed for the balcony she knew skirted the outside. She tried the door leading out to the balcony that wrapped around the entire outside but it didn’t open. She walked along the bank of windows until she saw one that was ajar. Not many buildings had windows that still opened, but she knew this one did. It was one of the older buildings in the city. She pushed up the window from below, the old wood frame protesting out of lack of use and climbed through. A wall, like a protective barrier, that came to her chest met her. There wasn’t much room on the narrow strip of balcony, but enough. She stood on her tiptoes to get a better look over the edge and down into the streets below, though she could see the main streets stretching away ahead of her without doing so. They looked like clogged arteries. Cars were stopped in clusters, and backed up as far as the eye could see. Most looked abandoned, their doors wide open like the jaws of creatures waiting silently for prey to walk past. She saw movement. People moving like ants, through treacle, slowly, aimlessly. She knew instantly these people-shaped things were no longer really people. She could see a couple of people and could tell they were like her. They moved fast, frantic. Darting from one building to the next, or between bumpers and hoods of cars that blocked the roads. They were doing what she was – trying to survive.

The others, the ones moving like molasses, like old blood, she knew what they were. She didn’t kid herself. People had been joking about them for years, coming up with theories of what would cause it, or how or where it would start. But that didn’t matter really, when it boiled down to it. There was only one thing that mattered in the zombie apocalypse: survival.

Jemima opened her bag and took a small bite of one of the chocolate chip protein bars she’d packed and thought about her new life.

Like this story? if so, check out another of mine below!