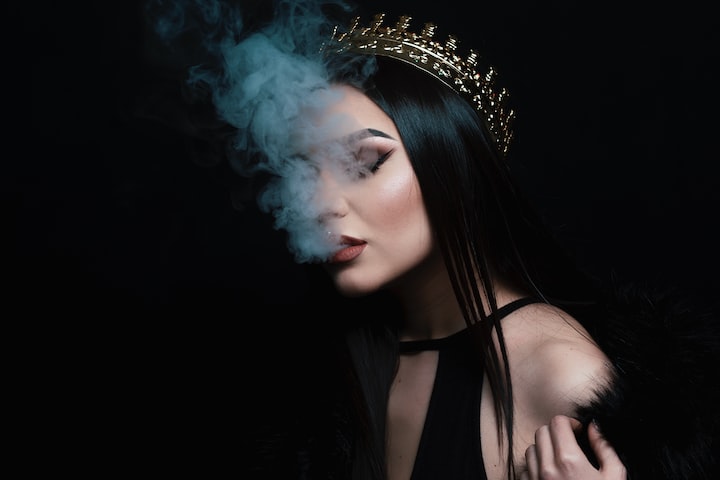 Maze, the Dragon Warrior was captured the night before her wedding.

She was to marry her best friend Zamphere.

Zamphere had no title but was always there to support Maze.

The wedding was set on Maze’s 25 th birthday.

The wedding was to take place in Deathbed Valley.

The night before the wedding , one of the castle’s maiden told Maze

that, she will have her armor and sword shined for the wedding.

Maze was very tired from the preparation of her wedding.

She fell in deep sleep. That night a dragon visited, Maze .

King Drake called to Maze, but Maze would not wake up.

The dragon reach in Maze’s bedroom window and carried

her body to the Dragon Queen Lair.

Maze woke up in a room full of Dragon eggs .

Dragon Queen spoke to Maze , “ You finally woke up, my darling niece.”

The Queen had her hands folded, tapping

her fingers with long nails 💅 on her arms at the same time.

She was staring deep into Maze’s eyes.

Maze answered her Aunt, “ Don’t call me that, you are no relative of

mine! I despise you! You had my parents killed by your pet dragons.

Who kills her own sister?!”

“Your father was betrothed to be, your mother stole him from me!

Now you must die, too. You should have married King Drake! “, the

“What does King Drake have to do with anything ?” Maze asked ,

“ Why don’t you asked him that, he will be here , soon to witness your

final death. “ her aunt said with a high pitched laugh.

The dragon Queen left, Maze. She checked her surroundings,

to find ways to get out , before the eggs hatches.

She certainly, don’t want to be dinner.

She used her special call to Zamphere. She was not sure if it would

be heard . There where no windows. She was not sure , if she was in

tower or a dungeon.

Zamphere arrived at his bride castle , at first light.

He was reminiscing about the first time he met, Maze.

His parents were the servants at the castle.

They adopted, Maze as their daughter, when Her parents were

She was so cute with her pigtails. Maze used to fallow him around,

wherever he go. He always look at her as his little sister.

He was always protective of her. He had to marry her to protect her

from King Drake. Zamphere was protecting Maze from finding out

who King Drake really is.

Back at the Dragon Queen Lair, King Drake finally arrived in his

Armor suit. No one really know what King Drake look like

under his armor, but the Dragon Queen.

King Drake , open the door where Maze was a prisoner.

“ Are you finally going to be my bride?” he asked her.

“ Never, I rather die than be your bride! “ Maze shout.

“ Then death it will be. “ Drake told her with malice.

Zamphere , was going to knock on Maze’s bed chamber

in her castle , when a maiden was carrying Maze’s Armor into her

“ I had it clean for the wedding.” The maiden answered.

He ,though this must not be good. He quickly open Maze bedroom

door and no one is in it. Maze never leave the castle without her Amor.

Will Zamphere find Maze in time? Why must Maze marry Zamphere to

save her from King Drake. Is this the end of Dragon Warrior?

Stay tune, I hope you are enjoying the Dragon Warrior Channel.