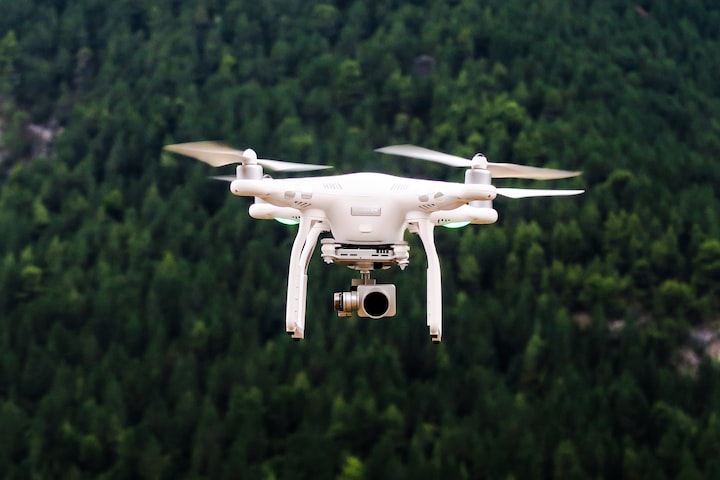 Photo by Jason Blackeye on Unsplash

The letters rolled across the computer display from left to right: Successful Delivery. Daran was on a mission. The target number for a solid quarter of deliveries was around 300, and nobody had come close to it this quarter, so far. Daran was encroaching 299 and it wasn’t even lunch time yet.

She stood and scanned the other drone delivery technicians, also known as DDTs, in the immediate cube farm around her. They were all locked in, staring at their respective screens. No doubt aiming for the same prize that Daran currently had a firm grasp on.

Tenable Dronz had rolled out an incentive program for successful drone deliveries, and the DDTs were salivating in hopes of claiming the program’s prize. The last two quarters yielded serious monetary stipends, and with the holiday season fastly drawing near, and monoliths like Amazon barking for assistance, drone delivery services were as busy as a bee farm. Money didn’t grow on trees apparently - it came from drone droppings.

Daran had only been on the job for a few months, but had emerged as a valid contender for the stipend. Scuttlebutt swirled around the cube farm as it seemed nobody really knew much about her background. She was a bit of an enigma, but management was impressed with her performance, so the office was left to bear witness.

After a satisfying scan of the cube farm, she returned her focus to work - opened the final delivery request, double-clicked on the delivery address, and brushed her bangs aside. "Keep your eye on the prize," she whispered to herself as she opened the drone navigation (DRONAV) app and ran diagnostics on her company issued drone. “And don’t count your eggs before they’re in the pudding.”

Within a matter of seconds the diagnostics results populated the screen in a colorful display of solid and flashing characters. All systems: Ready.

Daran’s left monitor was dedicated to the drone's camera and real-time flight footage, the right was dedicated to the DRONAV. Around the perimeter of the left screen various gauges over-layed the camera footage. The current footage was a birds eye view of the outskirts of the city. Estimated delivery time was already at the five minute mark. Daran clicked on one of the monitoring tabs in the DRONAV. All components showed green status indicators, even though the camera footage indicated an unusual wobbling.

Four minutes until the package destination.

As the drone approached some buildings encapsulating a playground area, one of the drone sensors on Daran’s left monitor lit up red. Suddenly, the package dislodged from the drone and descended toward the playground.

"Oh shit, oh fuck!" Daran belched as she capped her bottle of Mr. Pibb. She thought to check the other cubes, to see if anyone had heard her, but thought otherwise.

She relaunched the diagnostics app. A pop up window quickly revealed an issue with the package transport apparatus. Before she had a chance to zoom in on the message details, a chat window appeared on the right monitor.

Yo fuckface, it read in a small green font on a black background. How's the final delivery going? Still got your eye on the prize?

Daran froze momentarily. She wanted to respond to the chat window, but she absolutely had to figure out how to retrieve the….

The camera now fixated on the package - zoomed in from high above. It had landed near the fence line of the playground and a small human form was skipping towards it. It looked like a little boy decked out in winter garb, and when the package landed in his vicinity he reacted, accordingly.

"Don't touch it! Just leave it little buddy!" Daran instructed from the clouds. But the boy continued his delightful advance. When he reached the package he wasted no time inspecting it. After turning it over a few times in his hands, and shaking it vigorously, he targeted the seams with unnaturally capable little fingers. Daran could only observe from afar as what looked like packing popcorn began to erupt from the box as the boy tore through.

We would like to recognize Marvin Jenkins as last week's winner of the quarterly contest!!! Marvin's dedication and commitment to continuous….

Daran read the email from a bathroom stall in an empty public bathroom. After last week's mishap she figured Marvin was next in line for the bounty. She had trained under Marvin during the onboarding and developed a like, dislike, relationship with her mentor. Marvin was super smart, knew drones like the back of his hand, but he was also a narcissistic prick.

She recalled how Marvin easily hacked just about any drone, from anywhere, with a custom program that exploited drone navigation protocols. Its logic was cutting edge, and geared towards nefarious activity.

Daran knew Marvin had sabotaged her drone somehow, she just couldn't prove it.

The thing about Daran and Marvin is, they weren’t exactly strangers outside of work, either.

When they were young, they used to draw crazy comics. Daran was all about Punisher style action and violence. It was fun combining all the Punisher comics she read with all the action movies she watched as a kid. But Marvin, he used to draw comics about serial killers and shit. The Night Stalker - that was his thing. Super evil, repulsively gross, but honestly, pretty good. Daran thought.

Candy Man was a good one though, it really showcased his bee fascination. He figured out how to remove a bee's nest without getting stung. And when he removed the bee's nest, the idea was to find the nearest playground to unleash it upon. He would kamikaze attack these kiddy playgrounds and launch these bee hives right in the middle of these tight spaces filled with unsuspecting kids. The parents would go ape shit!

But as they got older and drifted apart like some friends do. And the last she'd heard of Marvin, he had gotten a new computer and was spending just about all of his time engrossed in it.

The holiday season was now in full swing. The city streets revved and bustled with delivery vehicles, scurrying to meet quotas and deadlines. Holiday décor coated the exterior of all the buildings, and pumpkin spice could be sampled just about everywhere.

Marvin lived just off the main drag in a modest apartment complex with a swimming pool and a tennis court, although Marvin never indulged in either. He only ventured from his apartment for essentials. Beyond that, he was pretty much a ghost to his neighbors.

A classic black car slowly nestled in between varying multi-colored vehicles before finding a parking spot. Its occupant smoked and flicked ashes out of a slightly open driver side window.

Leon's phone chirped and he opened the screen with a biometric thumb scan. The new text revealed several pics of the target he was dispatched, to dispatch. "Peeka-boo you mudda fucka, ha ha!" He said as he flicked the remnants of the smoking cigarette out the window before rolling it up.

Marvin climbed the staircase to his fifth floor apartment. The elevator was occupied by medical personnel transporting an elderly lady on a stretcher. Might've been Marvin's neighbor, but he was too engrossed with mindless Internet content to even pay attention. By the time he ascended the stairs and reached his corner apartment, the blaring ambulance siren had started to fade.

Still locked into the screen of his smartphone, Marvin failed to acknowledge the dark top hat and trench coat approaching him.

A distant church bell chimed as the dark figure pulled an elongated handheld gun from his coat and put the butt of it firmly against the back of Marvin's head. "Yo fuckface," Leon said in a low voice as he squeezed the trigger. A metallic thump recoiled the weapon as brain matter splashed and smacked the door. Marvin's body crumbled and fell into the door with a thud. "Still got your eye on the prize?"

It is with great sorrow that Tenable Dronz has learned of the passing of Marvin Jenkins. He was a valued member of the DDT team…

Daran scrolled through the latest company email as she sipped on her holiday latte from a park bench. Her thumb stopped the scrolling just as the scroll bar might be reaching the bottom of the email. The words she landed on brought a smile to her face.

…in the absence of a winner, the prize goes to the runner up. Congratulations Daran…

She screen locked her phone and tucked it into her coat as a dark dressed figure approached from the fence line. "Care package delivered mam," Leon said.

“Did you say the things I told you to say, so he would know it was from me?”

"Did you find anything in his apartment?"

"Nothing special." Leon said as he pulled a fresh cigarette from his pack. "And if you're gonna ask about his laptop, no dice there either. Here's what the screen looked like."

He pulled his phone from his coat and swiped a picture onto its screen. Daran glanced at it and nodded her head. "The system is wiping itself." She looked at the playground through the rusty fence and continued. "He probably had shit on there that he didn't want people to find."

Leon smirked and returned his phone to his coat pocket before taking a drag off his cigarette. "So, my work is done, right? I got places to be, people to see. You know the deal."

Back at the office, it had been two weeks since Marvin's sudden departure. Rumors swirled throughout the office, but none of them indicated Daran. As far as she knew.

The company was catering lunch from the local Japanese restaurant, and Daran mauled her plate. She thought about going for seconds, but settled on her fortune cookie. What kind of random crap is it going to say this time, she thought.

She crushed and crumbled the cookie in her fist, and when she opened her hand, the fortune strip floated down to the table. It didn’t have any words, just a string of numbers on both sides. The one side looked like the standard lottery numbers you might use for a lottery, the other side had a date timestamp with a brief message.

Daran’s eyes lit up as the three word message looped in her mind. She didn’t fully know how she knew it, but she knew this was from the man she had just killed. And the more she stared at the words, the more the attached numbers began to reveal their encrypted message.

This was the initiation time for a logic bomb Marvin had embedded in the company’s infrastructure, a digital beehive once executed.

And when her phone began vibrating on her desk, and the inbox on her right monitor began to flood with emails, her throat plunged into her stomach. She stood to see what the rest of the cube farm was seeing. The computer screens in the immediate cubes flickered with images and fast scrolling code before landing on a simple text message:

HI, MY NAME IS DARAN.