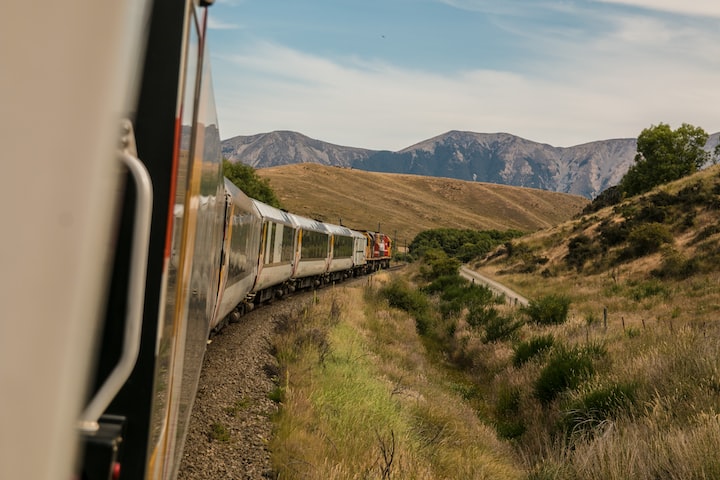 Photo by Josh Nezon on Unsplash

She was awake. Finally.

“Train comes, I don’t know its destination,” she said, breathless. Her face was red, her fringe was stuck to her face. She repeated that line again.

I know those lyrics. It’s to a song but I can’t remember who sings that song, at the moment.

All through the night, she had been jerking all over the place, what do you call it? Hypnic jerks. She probably was falling from somewhere.

I got on the train, organised the luggage area on my side, organised my seat, and all amongst my ignorance, I looked over and saw another human being in my room. Not that I was entirely upset because I had company but a percentage of me was still upset because since then, she hadn’t acknowledged me. I said hello a few times, every couple of hours. No word. I knew she was alive – her stomach was softly moving. I had let management know but they had this seedy look in their eyes that they knew what was happening. Roger the conductor, fobbed me off – twice.

Alright then, I backed off.

She repeated those lyrics. What is she on about?

Eight-twenty. The sun had barely showed her face, but I had been awake for some time. I was worried with the runaway. I felt like she was one. But she wasn’t entirely a runaway because Dodgy Rogey knew something, and he was doing everything to avoid me.

She moved again. This time, rubbing her eyes, looking over at me, then panicking. She was all over the place, scrambling for something she recognised. Then she started bleating on about her phone and where it was. I shrugged.

“Who are you?” she said, hyperventilating. “And why are we on a train?”

“I don’t know a Roger,” she said, face scrunching up.

“I don’t even know how I got here,” she continued. The tears weren’t coming out – thank

goodness. “I was at a bar in some shanty town, talking to this guy named Mario and then next minute, I’m bundled on a train. Did I say something?”

“I don’t know who Mario is,” I said, still trying to recollect everything.

“Sounds like you’re either pushed some buttons or you’ve just been booted out of town.”

She looked around. There were no bags in her luggage container, and she didn’t have anything on her.

“Will I get booted off?”

“Stay here and I’ll see if I can find out something,” I said, as I got up out of my seat. As I lunged forward to open the sliding door, the thought of leaving my valuables in a carriage with a nutbar blurting out Sugababes lyrics, was very brave.

Then it hit me. I turned around. “Why are you singing Sugababes lyrics?”

She looked at me dumbfounded.

I shrugged off what she had done and moved out of the room. I walked down the hallway, looking into each room for some help. It felt weird going the opposite way the train was going. I was trying to figure out why she was singing that song. I walked past room, with the door open. Inside, I could hear Roger the Conductor, another male, and a female. I looked on the door and saw a hanging mirror. This must be the HQ of the train.

“…She will wake up soon,” the female stated. She sounded like she was chewing gum.

“And when she does, who’s going to take the blame?” the other male questioned.

“Blame it on that turd that’s in the same room,” Roger said, a little aggressively.

My ears switched on fully.

“He has been badgering me since we left that stupid town,” Roger continued.

“And he’s suspicious,” he added. “For all we know, he’s listening and relaying information back to the authorities.”

“For the record,” I said, barging in. “I have not been badgering you. You’ve just chosen to be an ignoramus runt and not communicate with me.”

The three looked at me like they were deer caught in the headlights.

“So, who’s the mastermind behind this elaborative plan?” I asked, standing in the doorway. “We have a distressed girl on our hands and you’ve involved me now, so what is the plan? What happened at the last stop? Why do we have a girl constantly blurting out “train comes, I don’t know its destination,” for?”

The female giggled. “Is she really singing that Sugababes song?”

“Beside the point,” I said, annoyed. “What happened?”

The three shared a look then the female continued, “She has a bomb attached to her mid-riff. It’s going to go off sometime tomorrow when we arrive at an important stop.”

“The train can’t stop,” Roger smiled. “It will be like a racing comet, exploding at the station as we fly past.”

The other male got up out of his seat and moved toward me. He stuck out his giant paw and pushed me out of the doorway, then swiped at the door handle to close the door. The other two laughed. Meanwhile, a tea lady pushing a dolly just happened to walk past at a perfect timing and I fell backwards, into her. I slipped off the trolley, landed in a heap next to the wall, partially knocking myself out.

I felt someone shake me, violently, like I was caught in a massive earthquake.

I rubbed my eyes and realised I was having a bad dream.

“What were you saying before?” I saw my mate, Rachel, standing there. “You were singing that damn Sugababes song then kind of slipped off the stage and fell unconscious for a minute.”