by Christopher Beesley 5 months ago in Horror
Report Story

Less than 1000 stories to tell in the dark 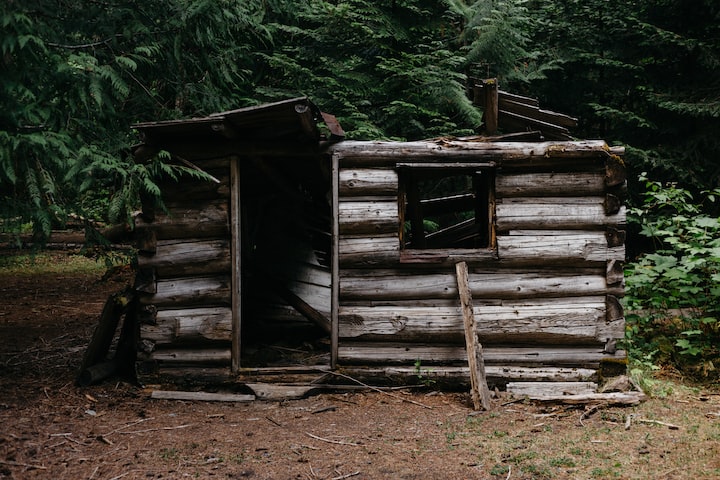 The cabin in the woods had been abandoned for years, but one night, a candle burned in the window. One if by land, two if by sea; but the Paul on this ride wasn’t Revered . Yet he rode headstrong to the cabin.

Paul parked his bike outside the cabin, standing it by his compatriots’. It seemed he was the last to arrive. He gulped as he made his way to the threshold.

It was tradition for schoolboys to venture into the cabin. It’s where schoolboys became schoolmen, and Paul wasn’t about to let something like absolute terror stand in his way of becoming a man.

A quick turn of the knob, a quick squeak of the door, a quick creak of the floor and Paul found himself in the place of legends.

“Guys?” He called into the darkness. The candle offering little light in the abandoned room. “Guys?” He stood in place barely inside the room.

“Oh, shuddup you-“ out of force of habit Paul looked around for supervision, “damn dirty buttlicker!” He shouted into the darkness, causing a stir and stream of giggles from the apparitions in the dark crevices of the haunted abode. “Mikey, I know that’s you!”

Mikey turned his flashlight on under his face and roared as the giggles turned to full blown laughter.

Paul stood stoically, yet felt relief the apparition was in fact his best friend of twelve years.

“Oh, we got you good, LeChance!” Mikey closed the gap and shoved the flashlight under his face again before shouting “Boo!” and collapsing into the floor in hysterics.

“Look!” Another apparition shone his light on the interloper, “He nearly pissed himself!” The light shook wildly as the weilder doubled over in laughter.

“I did NOT, Eric!” Paul shielded his eyes from the wildly rebounding light focused on his eyes.

“Well someone did!” A third apparition shone his light at Eric’s ever moistening undercarriage.

Eric stopped laughing, realizing all eyes were on him and the wet spot between his legs. “Awww, c’mon guys! It wasn’t cuz I was scared!”

Paul, Mikey, and Corey all shared a glance and jointly called out, “It was a ghost!!!”

Laughter filled the cabin as Eric began to scramble for a dry set of tighty whiteys. His only pair of pants, ready to hang over a windowsill not sporting a candle.

The boys collected themselves and gathered around in a circle in the middle of the abandoned cabin.

Mikey brought his light under his face again. “Alright boys,” He looked around at his gang. “Tonight, we enter this place boys,” He spoke as if practiced this speech for years, as he did, “and we leave men.” He looked at the ceiling of the haunted cabin. “We appease the ghosts of this hallowed ground.”

Eric touched the floor, expecting it to fall out from underneath him. “Hollow?”

“Haunted!” Corey chimed in with his flashlight under his face, hoping to drain Eric’s bladder once again.

“Whoa.” Eric looked down, fully grasping the situation He was in. “Can’t we just, say, we did it?” He looked around but found no support from his friends before shrinking into himself.

“It’s tradition, boys.” Mikey placed his flashlight under his chin, before beginning his tale. “It was a night just like tonight, in a cabin just like this one…

Jack and Kelsey had just arrived at Kelsey’s parent’s cabin. It was dry and Sunny when they arrived, but as the sun set, the clouds gathered around. The moon was full, but it’s light quickly faded as the storm approached.

Suddenly, the lights went out. Kelsey freaked and clung to Jack. “Jack!” She screamed.” Fix it!”

Kelsey looked at Jack with her big doe eyes until he caved.

“Fiiiiiiinnne!!!” Jack rose and grabbed his light. He headed outside, to find the fuse box. Inside the box he noticed none of the fuses were blown. As he traced the line, he noticed the power cord to the fuse box was cut, cleanly.

A scream sounded from inside the cabin.

Jack rushed back inside, only to find a Dark figure standing over Kelsey, blood spilled everywhere, and Kelsey’s heart, still pounding, pierced by a hook where the mysterious man’s hand should be!

Mikey held his hand out as a hook, his face twisted as if he hungered for blood.

“Then He tore into Jack’s chest! Ripping his heart out too!” Six eyes focused on Mikey’s clawed hand as he began to mimic chomping. “And that’s when he ATE their still beating hearts.” Three jaws dropped.

Mikey smiled triumphantly. Knowing his story would be the scariest.

“Did they make it out okay?” Eric’s face Grew concerned.

Mikey stared blankly. “He ate…” He never expected such a question from his practiced story. “He…ate their…hearts.” He looked at his other friends before giving up.

“Please!” Corey chimed in, “that’s nothing!” He smacked Eric’s shoulder with the back of his hand before starting his own story.

Elliot And Johnny drove their car out to Makeout Point. Things were getting hot and heavy.

The man on the radio was talking about a wild beast, last spotted at Makeout Point, but nobody in the car noticed, because Johnny was totally getting to second base. He had a handful of Elliot’s tits when all of a sudden they heard a howl from outside.

Elliot freaked! “What was that?!”

“Nothing!” Johnny still had a handful of tits, but knew he would have to go check it out.

So he leaves the car, and Elliot locks the door.

An hour later, Elliot begins to wonder where her boyfriend was, and she hears another howl.

Corey jumped up from his seat, claws brandished like a werewolf.

“Aaaarrrrwwwoooooogggggaaaa!!” He howls and scratches at the air. “A werewolf slashes at the door of the car! Tearing into it, and clawing Eliot’s massive tits straight off her body!”

The boy’s, all caught in a trance until Mikey spoke up, “Were they D’s?” Always with the important questions.

Corey looked smugly around the circle. “Double D’s.” He mimic’d the biggest pair he could in front of his own chest, and gave an imaginary squeeze.

“Nice.” The other three chimed in together, sharing unknowing knowing glances all around.

Mikey was the first to break the silence. “Alright, Eric.” He pointed his flashlight at his tighty whitey clad friend, ignoring his tiny pitched tent, “Your turn.”

Eric put his own flashlight under his face.

Kelsey and Elliot parked their car right outside a cabin in the woods. They were like, totally making out.

A guy on the radio-

Mikey and Corey interrupted. “C’mon! Man That’s just-“ they looked at each other.

“Let him finish!” Paul, always the voice of reason got the others to quiet up. “Go on.”

The guy on the radio said there was this man with a hook for his hand up at Makeout Point.

“You mean the Cabin?” Mikey chimed in, causing Eric to ponder how on earth he could possibly recover.

So the guy on the radio said there was this guy with a hook for a hand at the cabin at Makeout Point. And Johnny went out-

But there was a commotion outside and Johnny went to check it. And the next morning, she goes to check it and man door hook hand car door.

Eric looked around as if he had given the greatest speech of his life. Surely, nobody could ever top his story. The blank faces of his friends told him otherwise.

The other three boys burst into laughter. “Only get one shot, buddy!” Corey pointed and laughed at his disappointed friend.

Between chuckles, Mikey was able to push out, “Besides,” it took him a minute to regain his composure. “It’s LeChance’s turn.”

Paul struggled to regain his composure, but finally threw the flashlight under his own chin.

“It was in this very same cabin…

The Boys had found the cabin years ago. It had been their base of operations ever since. Tradition held, wherever the first would arrive, a single candle should light the way for the others. As the old addage went, “one if my land, two if by sea.” Luckily, they were in a landlocked area, since they only had the one candle.

This night, however, something else had followed their guiding light. As the boys sat around, laughing and telling stories, something crept around outside. Something large, with fangs and claws (Paul rose his hands, as if his fingers had turned to long sharp claws, always the showman.), ready to tear the unsuspecting boys to shreds.

As the stories came to a lull, a howl echoed outside the cabin, and the hair on all three boy’s necks stood on edge.

Suddenly, the door swung open, as a burst of cold wind blew the candle out.

Paul jumped, barring his teeth at his friends, and brandishing his pretend claws. A new Moist spot began to form in Eric’s freshly dried tighty whiteys. The other boy’s mouths hung agape.

Suddenly, the door swung open and the candle blew out.

An older boy, about seventeen, walked in, “See?” He swung his arms around, proving he was alone in the cabin. “Nothing. No ghosts, no boys, no nothing.” He plopped himself down on a decrepit couch. He patted the seat next to him, giving ‘come hither’ eyes to his girl.

She slowly approached the couch her lover treated as a throne. “I don’t know, David, isn’t this where….” She looked around as he slowly pulled her towards him.

“Oh yeah!” His eyes lit up, “They saaaay those kids were found up here. Torn limb from limb.” He looked around, pointed in the corner. “There’s where they found the LeChance boy. Right under a burnt out candle. What did they used to say?” He scratched his chin, as if it wasn’t already cocked and loaded in his mind, hoping to scare the panties off his paramour. “One if by land, Two if by sea, three to tell stories…”

The candle sparked back to life.

“And Four to see me!” Paul brandished his claws and tore into the interlopers. Hoping his new friends would tell better Ghost stories.