by Henry Shaw 11 months ago in Horror
Report Story 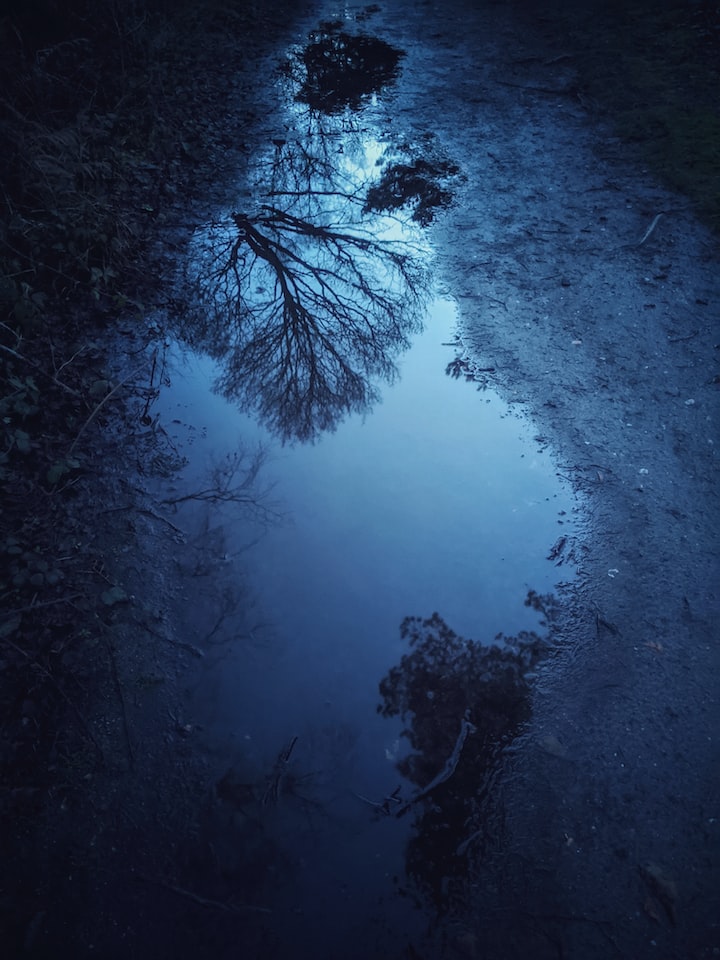 Photo by Hannah Wright on Unsplash

Please, tell me you can see it!

That’s why I came here, you know. To see if I wasn’t crazy.

It’s followed me like this for the past six months. This putrid mass of creeping black ooze. Oh, how I wish that was all I had to describe, yet it’s horrifying features know no bounds. Somewhere beneath that goopy, grimy, tar-like liquid that drizzles unendingly from its very core, two foul, yellow, empty eyes strike an unending gaze at me. Like a bastard black cat, those eyes stare as though they expect something from me, but what? My very soul pulses and pounds as violently as a lightning storm when I ponder that dark question, when I see those eyes. Those damn eyes! Can you see it? It’s here right now!

Can you— I… No, you know what, I’m sorry. It’s just that I haven’t slept much since this began, as you can imagine. I seem to be losing my grip after being awake for so long. I’m just never quite sure what will happen if I close my eyes. I’m doing my best to maintain some sanity, some sense of awareness, but it’s getting more difficult to stay lucid with each passing day, to stay vigilant to it's snares.

Every chance it has it tries to take me, consume me and absorb me as part of it’s hellish abyss. Draw me into it’s dark center, enveloping both body and soul, pouring its tarry, black, and oozing filth down my throat should it catch me at a moment of exhaustion. Damn it all! I just wish it would get it over with! Finish things quickly so I don’t have to think about it. Instead it just creeps, seeping ever so subtly like a python slowly tightening it’s grasp around a rat. Can you see it?

It all started when I went to visit my childhood home. Gosh, if only I’d stayed inside that night! Stayed inside and away from the pond. Out of that rickety boat.

I was always light on the water as a kid, the captain of my little dingy and hero of the stories I’d dreamed up in my vivid imagination. I thought things would be the same when I went back home, that my stories might pick up where I left them in a new and exciting chapter.

But that day I let time get away from me. I let nightfall envelope me like a foul miasma. Like some unsuspecting insect, the trapdoor spider of nightfall had leapt upon me suddenly and without warning. Before I had time to realize what time it was and grab for my oars I was overcome with a feeling of dread only a death row inmate could know, when the alarm rings the morning the chair is charged and ready.

Something beneath the surface of the scummy, algae ridden pond water was pulling me and my ship downward. I never used to get seasick, but at that moment my face was as green as a frog and my lunch had come up and painted the boat floor a puke-brownish green.

It was as if the tentacles of a great octopus were slithering their slimy way around me and my vessel. I could do nothing to prevent it from happening. Like quicksand, the more I writhed and ranted the more I sank into the abysmal depths. I was consumed by it. Filled with it. Crushed by the immense darkness and terror of some unknown force smothering and violating my entire existence.

The next thing I knew I was pulling my way onto dry ground, forcing up pond scum and seaweed I had inhaled in the fight to free myself. It was unclear how I got free, or how I made the shore. Was I even the one who pulled myself out of the point of seemingly no return?

When I rolled onto my back, a figure stood before me. It was as though the depths I was drowning in had manifested as a living, breathing nightmare. My struggle wasn’t over, it had simply followed me back to the surface, ready to continue our quarrel wherever I ran.

From that day since it’s been like my shadow. A constant companion, always reminding me that I’m never safe, never fully in control, never able to trust what I see. Oh yes, as if it’s constant lurking in pursuit of my demise and vomit inducing appearance weren’t enough. The demon tortures me with visions of those I trust the most. The dripping, oozing body of the monster seems to be malleable enough to shapeshift, to twist, contort, and mold into false and hollow imitations of my close family and friends. The blasted fiend! Can you see it?

I can hardly tell the difference anymore, so much so I’ve cut myself off from everyone I know. It sounds harsh but believe me the alternative is much worse. Imagine being surrounded by friends, family, loved ones, and for some reason nothing feels right at all. They’re almost entirely silent. All you can do is hope they will say something, express some emotion, reach out to you in some way. Yet all you feel is emptiness.

That’s how I learned to tell them apart you see? The imitations don’t speak, at least not enough to make you feel like you’re real to them or that they’re real to you. But still, they're so convincing, so believable at times that no matter how untrue they are, no matter the deception, the pain is as real and as sharp as a knife. The pain of being surrounded and yet totally alone. Curse this infernal horror! Can you see it?

Please, tell me you can see it?

Before I hid myself entirely I tried talking to my family, but they hardly listened. And why should I expect them to understand? How could I even explain it? I wouldn’t understand nor believe it myself if it hadn’t been my waking nightmare for the past six months. I wouldn’t expect anyone to know what pain it causes, this lurking demon of bubbling goop and grime as black as the night.

Then again, my mind has been so frenzied, so robbed of respite. Perhaps I may have slipped. Was I only describing my woes to imitations molded by the monster all along?

Come to think of it, you’ve been rather quiet this whole time haven’t you? It’s fine, it’s a lot to take in all at once, I know. But what could you say about something so horrible?

You could say something though? I mean, you can see it can’t you?

Oh please— Tell me you can see it.

You know what, just tell me something. Anything.

More stories from Henry Shaw and writers in Fiction and other communities.