A Meal In A Minute 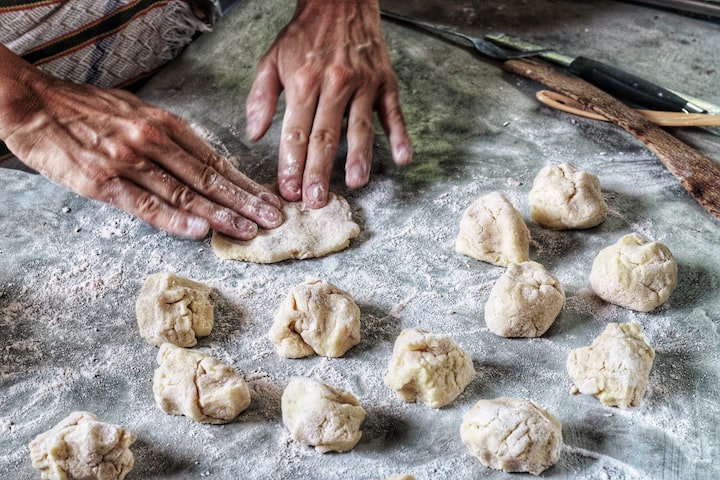 Photo by Petr Sevcovic on Unsplash

Burned by a red bead of pasta sauce—a consequence of choosing to heat the contents of his can of Chef Boyardee in a saucepan rather than the microwave—Luca turned down the dial on the electric burner. He’d cut himself on the can’s edge a few minutes ago, and now the bleeding edge of his palm absorbed into his sweat-stained work shirt as he stirred the pot with his left hand. Steam tucked itself between his fingers, settled onto his bare shoulders, burrowed into the premature creases of his forehead, making him itch. Wiping the moisture from his eyebrows with his shirt-hand, Luca resolved to never work in an American restaurant. He was sweaty enough.

His father’s laugh shocked him as he poured the pasta into the creased paper bowl, sending a sauce-swollen ravioli onto the laminate countertop. It wasn’t Massimo’s staple laugh—the broad, back-slapping sound that would sweep across mismatched table settings when the urban side of the family came to visit. This was a throat laugh, high-pitched, an annoying child tugging against Luca’s earlobes. The laugh for the hare caught in the apartment complex’s metal fence, or the fish as it flopped against sweating wooden planks under the heat of the August sun. “Look what God has given us today, Luca!” he would say as the animal writhed, readying a knife and a satchel to bring home the ingredients for the evening’s ravioli filling.

“And look at what God has taken from them,” Luca would respond.

But this was what their summers had tasted like: pesto made from the last good ramps unearthed in June, hare ragu washed down with red wine, porgy tortelli in brodo. The meal was always followed by a shot of limoncello and hand-washing the plates passed down by Massimo’s mother, painted flowers and fruit glistening after having been wiped with a rag while uncles who had moved away from the countryside grumbled about dishwashers. There was an effortless beauty in this life that had kept Luca well into his twenties. He and his father awoke to sunrise filtering through thin drapes and then the hunt would begin—more forage than hunt, always finding trapped animals or extra fish brought in from his cousin’s weekly boat rides. “Vultures, we are,” his father would say. “Or angels. It is in our nature to eat. Who can blame the vulture for finding something already dead, or killing a creature if it will be dead in a minute?” Luca would quip with his father throughout the day regarding the nature of their daily hunts, never betraying how much he actually agreed.

The saucemaking was Luca’s favorite. As the day achieved its peak heat—usually around two or three o’clock—they’d return to Massimo’s flat to prepare dinner. As his father kneaded the pasta dough and seasoned the filling, Luca would whisper prayers at the gas stove lighter, pour a hefty amount of olive oil into a saucepan, smash garlic with the edge of a cleaver, and listen to its soft sizzle as it met the heat. Too loud, and it was too hot; too faint, and he’d gun the gas. He’d crush the canned tomatoes with the back of a wooden spoon and listen to it purr as he seasoned with salt, pepper, and basil. And just as he would finish cooking the sauce to a perfect consistency, he’d hear the gentle plucks of ravioli against boiling water in the pot next to his as his father tossed them in with a softly-shaking hand.

Luca didn’t leave because of some divine beckoning from the city, like the kind his relatives would tell elaborate stories of during their monthly dinners. No, he left because of his father’s stubbornness. Luca had tried to take on more duties at home, even got a job at the wharf with his cousin—but the money wasn’t enough, and Massimo was too proud to sit home, and so his hands got shakier with each once-deft slice of blade against foraged prey. He’d sometimes grunt in pain, but start to cough and complain that a piece of dust or pollen or fur got caught in his throat. Luca had easily seen through his father’s attempts at misdirection, but they couldn’t afford the doctor even with extra shifts at the wharf, and he’d known better than to even bother his father with the suggestion of visiting his uncle, a doctor, in the city. So Luca, after a year of telling his father to rest, a year of his father defying instructions to rest, left.

As East Harlem summer wafted through the only window in his apartment—hairspray fled out onto a damp sidewalk with the opening of the salon door down the block, the East River spritzed its signature musk, and the woman downstairs with the beautiful hands was kneading panettone for her sister’s bakery—Luca cursed God for immigration attorneys. It had cost Luca eighty dollars to hire him the week prior; the steep price, apparently a favor, had left him with only twenty dollars to rent a room and buy groceries. In Solofra, if he had groveled correctly, his aunt in the city would have let him sleep on their pull-out sofa. Isabella would even take him out to dinner at the restaurant she lived above, the restaurant he could never afford. But he knew how she’d punish his father, staring past Massimo’s left shoulder as she bragged about how she fixed his son for him. So here, after wandering the foreign aisles for half an hour in the grocery store, Luca settled for a few forty-cent cans of Chef Boyardee out of both curiosity and scorn. It would be impossible for the ravioli to compare to his father’s, but he wondered just how much worse it would be than the one he left behind.

Luca sat down at the peeling table and met the chef’s gaze, whose lips were curled in contempt underneath his black mustache. As he lifted his fork, he heard Massimo’s laugh again—amplified as it echoed against tin walls. You’re wasting your time, it snorted. Come home.

When the sweet acid that coated his tongue that night gave into his morning breath, Luca addressed a letter to Massimo Di Centa in Solofra, Italy, and placed in the envelope all the money he had earned except for forty cents.

More stories from Sophia D'Urso and writers in Fiction and other communities.