by Linnet Brown 2 years ago in children
Report Story 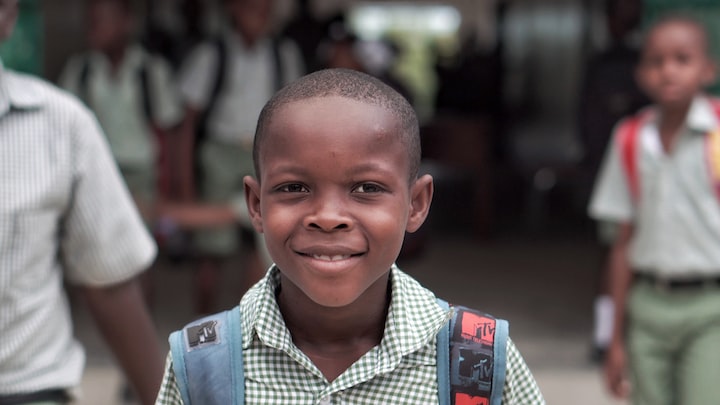 Tommy was known to be a very clever kid in school, getting high grades in his class and always boasted to his older brother Ken that he was the only clever person in his class. But he never knew that his mother was cleverer than he was until after the following incidents.

One afternoon eight-year-old Tommy returned home from school with his clothes covered in mud. His hands and face were also muddy.

“Why do you look like a pig that just had a roll in the mud?” asked his mother.

“Johnny pushed me in the mud,” replied Tommy, with a pitiful look on his face.

“And why would Johnny want to do a thing like that?” asked his mother.

“I do not know, he just pushed me in the mud,” replied Tommy, who appeared very sincere indeed.

“Johnny pushed you in the mud because you were standing by the mud,” commented his mother.

Tommy did not reply, but went away, changed his clothes and washed his face and hands. Nothing more was said about the incident after that.

But the following afternoon Tommy returned home with grazes on his knees and elbows. His clothes were crumbled and he seemed to appear upset.

“Tommy, what have you to say for yourself this evening?” asked his mother. “I want the truth this time. I do not like it when children tell lies.”

“Mom I am not lying, Johnny fought with me after school and we fell on the ground and that is how I got my knees and elbow grazed,” Tommy replied.

“Tommy, how many times have I told you not to fight?” asked his mother.

“Mom I have to defend myself that is what you always tell me to do. Johnny was shouting in my face and before he hit me I hit him first. That was how the fight started,” replied an unrepentant Tommy.

"Listen darling, whenever you feel like hitting someone, count to ten first and cool your temper down" advised his mother.

For over a week Tommy returned home in good shape. His mother felt delighted that he had taken her advice. But it did not last very long.

Because one afternoon, Tommy returned home covered in mud again. This time he was in tears. He did not appear physically hurt, but he knew that his mother would be cross with him.

So on this occasion he did not wait for his mother to approach him. He went to his mother.

“Mummy, Johnny was in my face and challenged me to a fight,” said Tommy.

“So you fought with him,” commented his mother.

“Yes, Mummy. I remember what Ken told me, he said; "Do unto others before they do to you" replied Tommy.

“Tommy please do not listen to what your brother told you to do. You are to listen to my advice. Okay, since you like using phrases, here is something for you to use called "W.I.T.S."Said his mother.

'W' means Walk away, ' I' means, Ignore, 'T' means Talk about the problem and 'S' means, Seek help if the first three did not work" replied his mother.

Another thing, the phrase your brother told you 'Do to others before they do to you' does not mean that you should use it as an excuse to hit someone. Darling, listen to your mother.

As a matter of fact I think that I should come to the school and speak with your teacher about Johnny because it seems that he is a bully" said his mother.

“No, no, mom please do not come to the school I will always use my W.I.T.S” replied Tommy in an urgent tone of voice.

Well, glad to say Tommy no longer returned home with muddy clothes and his mother was very pleased.

But due to the positive outcomes his mother became suspicious that it could have been Tommy who had initiated the fights. So without making her suspicion known to Tommy, one afternoon she said to him;

“Tommy, I am glad you are no longer fighting with Johnny”

“Good, I am glad to know that you are listening to me” replied his mother laughing. But it was not long before the truth had been made known.

One afternoon Tommy asked his mother; "Mummy can Johnny come to my home on Sunday evening to play with me?”

"Sure, if his mother agrees" replied his mother who was surprised at the sudden turn of event and friendship.

So the following Sunday afternoon the doorbell rang and Tommy's mom answered it. She was surprised to see a little white boy Tommy's age standing with his mother.

"Hi, I am Tommy's mom, glad to meet you, would you like to come in? She asked.

"No thanks, I have to be going back home but will return in about two hours’ time to get Johnny. I am glad that these two boys are now friends because Johnny always complained that Tommy did not want to be his friend.

He said that Tommy never wanted to play with him and that made him mad, so they ended up fighting.

But then one day Tommy told the whole class what you had said about using W.I.T.S. instead of fighting. So both boys talked and Johnny was able to tell Tommy the reason he had been upset with him.

Thank you for that because I will be using W.I.T.S. with the children in my football team" said Miss James.

"I always tell my kids that if someone does not want to play with them to leave them and find other friends." replied Tommy's mother.

"Tommy, Johnny is here" Tommy's mother shouted to him from the living room. Then Tommy ran downstairs, gave Johnny a hug and both boys went off to play.

"Using W.I.T.S is very useful and I am glad that both boys sorted out theirs differences and became friends. I do hope adults and older children can learn from this too" said Tommy's mom.

. Linnet enjoys working with kids. She has worked with youngsters in different professional roles, which were teacher, day nursery manager, and qualified social worker.

Linnet is retired but working as a volunteer. Linnet is an author.

More stories from Linnet Brown and writers in Families and other communities.