by Jenny Morris 2 months ago in vintage 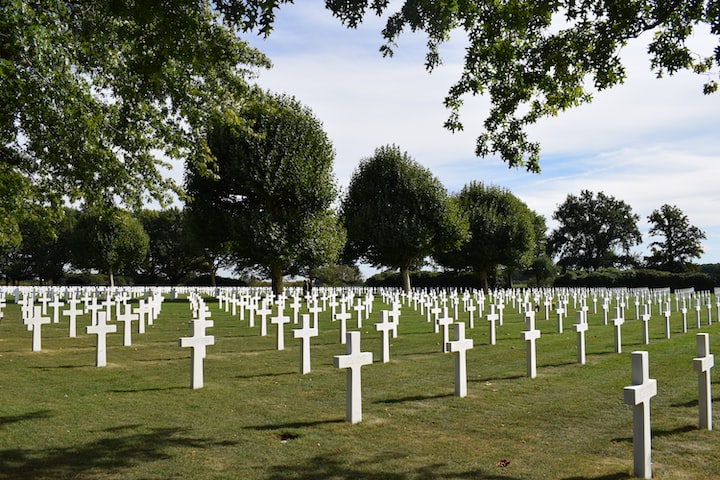 Photo by Rianne Gerrits on Unsplash

A childhood home should be a happy place. But as Margaret walked into hers, she could hear the silence haunting the walls and feel the air tense at her arrival. She would have preferred not to come back here, but it had been her mother’s last request — in her last days she had ranted endlessly about what a good man her father had been, and that he had taken care of them — which Margaret had taken to mean there was money in the house.

As she searched the contents of the attic, throwing boxes aside with mounting despair, she realised that perhaps it had been the dementia talking. Her father had abandoned them years ago.

Then, a box that was unlike the others. It was old and solid, made of oak and enrobed in dust. She opened it; her fingers grazed the contents, and she froze. Christ, her mother had been right. Inside was a ring so dazzling it took a moment for her eyes to adjust. Three stones were held in place by wisps of silver claws, sapphires that gleamed bluer than any ocean and brighter than any diamond. It was pure opulence against her skin. A ring like this would be worth a small fortune — twenty thousand, by her best educated guess. Had this been her father’s parting gift?

Besides the ring was a notebook, wrapped in her mother’s silk scarf. It was a simple-looking thing, plain black leather and small enough to fit into the palm of her hand. The pages crinkled as she turned them.

Today, I met a girl. Of all the things I could write about at war, I did not think it would be her. You could miss her at first glance, a small woman with mousy brown hair tucked beneath her white nurse’s cap. Her eyes are grey, although if you look closely, they are flecked with sapphire blue. What you can’t miss is the way the men wait for her command, or the way they launch into action when she finishes a sentence, but not a moment before. She does not say please or thank you. She does not apologise. I have never met someone so well suited to war.

I bought her a man screaming from the shrapnel embedded in his leg. It took three of us to hold him down — a fourth took one look at the misaligned flesh and fell to the ground — she told us to leave him while she fought the metal from bone.

She put me to work, ignoring my protests to return to my platoon. We served the soldiers in her care until darkness settled, at which point she offered me soup and a cigarette.

I learned that her name is Ginny Brown. She had three brothers, but one died in combat. She hides her gentle heart behind a veneer of strength, but sometimes her nose twitches and I can tell she’s banishing her tears to a well than runs deep.

I would tell her she is a bright light in a dark world. She would not appreciate such sentiment.

Margaret brushed her mother’s name on the page as if to check it was truly there. But it was, the ink staining the page like it had been written only yesterday. How strange to hear father speaking of her mother this way. When she remembered her parents together, before he had left, she thought only of the resentment in their eyes and the unease at the dinner table. Margaret had accepted that she was the loveless child of a loveless marriage, yet the pages suggested another story.

I should not admit this, not even to my private journal, but today I lied to my commanding officer. I told him we were out of bandages so I could visit the local hospital. Ginny’s hospital.

I live for these stolen moments with her. Changing dressings, restocking supplies and moving boxes, all to be with her. I’m going to ask her to marry me. Ginny Harper. I like the sound of that.

Margaret stopped dead. The elegant script loomed on the page, and now that she thought about it, her father had never had such penmanship. And his name, the one he had handed down to her, was Blake.

Ginny Brown has agreed to be my wife. I was going to find a ring first, but I couldn’t wait. Besides, in enemy territory, my only option would be a melted-down bullet twisted into a circle. She’s worth so much more than that.

My platoon is heading to the forests of Ardennes. The allies are moving forward — everyone’s saying this will all be over soon — then Ginny and I can return home. We’ll have a small farm and when people talk of the war, our children will listen as if it’s a story from a book.

I’ve found a ring. We came across a Nazi stronghold stockpiling goods to pay for the war effort. There were great works of art, vintage wine and all manner of jewels. Most of it will go to the allies, of course, but our commanding officer said we deserved something for our trouble. We’d earned it freezing in foxholes with no idea whether we trembled from cold or terror. I took less than the others, just a small ring. The blue reminded me of the flecks in Ginny’s eyes.

I have lost my platoon, and yet I still have this dammed notebook. I must write for fear of what my mind will do if left without a purpose.

I was in a foxhole with young Bobby. He was sixteen, lied to join his brothers at war, not that the recruiting officers look too closely anymore. We held a blanket over our heads to shield us from the rain but, no matter what you do, it finds its way under your collar and into your bones. Perhaps it’s just that there is so little else to focus on. Yet Bobby always managed to grin through chattering teeth and raindrops rolling off his nose.

There was a rustle in the bushes. Probably nothing, we thought. Bobby shuffled forward and pointed his rifle. We waited. The rain stopped as if the air were holding its breath. Then the gunfire started.

The last thing I remember was the bullet that snuck under Bobby’s helmet and tore through his skull. I was luckier, knocked out by the impact of nearby artillery. The Germans assumed me to be another body. If it weren’t for the thought of Ginny, and the life we could have together, I would have been glad to have died with my brothers.

Margaret fought her urge to tear through the pages faster and faster. She felt it lacked respect. This was a story of a man she had never met, a man who had never meant to share his words with her, and yet through these pages, they were connected. He had truly known her mother. Not the commanding glare and sharp tongue that most people saw, but the way she created order out of chaos and safety out of fear. He had recognised the way her nose wrinkled when she was fighting tears. And through it all — the cold, the starvation, the constant fear of a stray bullet — he had thought only of her. A man whose name had never crossed her mother’s lips. Why? It wasn’t until the final entry that she got her answer.

I do not blame you. I might have been angry at first, at myself for not marrying you sooner and at the war for all it has taken from us, but never at you.

All that time with you at the hospital served me well, and my new platoon was short of a medic, so they were glad to have me as we advanced through Ardennes. I was ferrying men from the frontline to the nurses’ station, when I heard a name being called across the chaos: Charlie Brown. I expect there are a hundred Charlie Browns, but one look at his grey-blue eyes and I knew he was your brother.

When the artillery quietened, I went back to check on him. He was luckier than most and, with time, I expect he will even be able to walk again. They are shipping him home, given that the war is expected to be over soon.

He told me everything. The reports of my death along with my platoon, your discharge from service and subsequent marriage, arranged quickly and without fanfare. I understand. The world is not kind to unmarried mothers, even when the child is a gift born from love.

Charlie told me that I needn’t worry; your husband is a good man, a soldier like me. I do not think it matters who you have married, because you have always been a survivor, and I expect our child will be the same. Still, I have asked Charlie to bring these things to you. My notebook, so you know that I never once stopped thinking of you, and the ring. You must have your own by now, but I am told the ring is worth considerably more than I had imagined, so I hope this can be my way of taking care of you. Of taking care of you both.

Perhaps we will meet again, my Ginny. I would like to see our child grow up in a peaceful world, to watch my son or daughter fall in love and have children of their own. But for now, I must see the end of this war, to be sure that it is only a story they read about in the history books.

Margaret’s nose wrinkled as she stifled her tears. There were no more entries after the letter, and the details fell into place. Ardennes. December 1944. In school, they’d called it the Battle of the Bulge. One of the deadliest conflicts of the war.

Her mother had kept this secret all these years: an out-of-wedlock pregnancy from a wartime love. The father that Margaret had grown up with had always accused her mother of being cold, glacial even, but in this notebook lay the proof of what Margaret had always known, that her mother was strong. A woman who was hard because she’d had to be. Margaret wished she could talk to her, to tell her that she understood, but perhaps that was why her mother had left the book in the attic. Ted, her real father, had written down the words that her mother couldn’t find.

Margaret looked at the sapphire ring. A true treasure to be sure. She wrapped it in her mother’s silk scarf and placed it in her bag. With it, she and George could afford the deposit on the farmhouse they had been dreaming of; a place to raise their children, full of life and joy. The life her parents had once dreamed of.

But it was the notebook she held close, inhaling the smoke and vanilla pages and running her fingers over the soft black leather. Warmth radiated through the pages and across her skin. It told her that she belonged, that she was wanted, and she was loved. To know that she had come from such a place meant everything. Her true father had no idea of the gift he had given her. Finally, the truth of her family.

vintage
Jenny Morris
Read next: Understanding the Effects of Addiction on the Family
Jenny Morris

Science and technology writer with a PhD in Cognitive Psychology. I also dabble in creative writing.

See all posts by Jenny Morris →