Marriage Rules of Engagement: Some Can Play More Than Others

by Musing Around 24 days ago in married

What Kind of Player Are You? 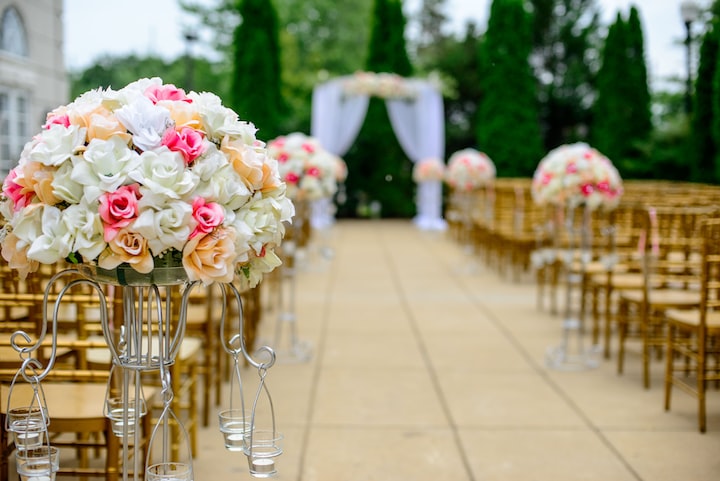 Photo by Shardayyy Photography on Unsplash

Like most young girls, I went through my Prince Charming phase. I dreamed of the day some handsome, dream-worthy specimen would swoop in and carry me away for a royal wedding, and I would rule my kingdom. Fair but just (eye twinkle).

As I grew into my teen goth phase, draped in black and equipped with a bad attitude, my views of Prince Charming evolved. I dreamed of a drummer that would let me sing in a band, and we would go on tour. Our lives would be spontaneous, rebellious, and Metallica would attend our wedding.

By the time I hit college, I was that singer. Drummers were better left as a dream rather than a real relationship. I lived in the moment, for the moment, and had no intention of marrying - like ever. I was comfortable in being unattainable.

College was exhausting, and afterward, I was ready to settle down and build a foundation with traditional marriage. I traded unattainable for available and rebellious for conformity. Mr. Right was now someone like-minded. No prince, no drummer - just a guy in front of a girl that loved her.

Definitions of what and who we want changes over time. Most look forward to the day that they hear:

“I now pronounce you man and wife; you may now change your Facebook status.” -Anonymous

Or do we? If what we want changes over time, why would the traditional institution of marriage and the rule of engagement to be monogamous feel natural to us? The simple answer is: It doesn’t.

In “The Myth of Monogamy,” a book by psychiatrist David P. Barash and Judith Eve Lipton, one of their most fundamental findings what that:

There will always be a sexual desire for multiple partners. Women may gravitate more towards finding the perfect mate because women have a select number of eggs for offspring. So, the urgency to select a mate is more urgent than men.

Men have an unlimited number of sperm, so their urge is to spread the seed in as many places as possible. However, both men and women will have the sexual desire to roam at some point. These desires are snuffed out with traditional marriage, or at least inhibited, aren’t they?

You and your partner’s definition of marriage and rules of engagement can be different from other people’s. No two marriages need to be the same. The first thing that should be understood is there is more than one kind of monogamy:

Social Monogamy: Living the social norms of man & wife. Same house, same bed, sexual relations - doing traditional marriage like a boss. The one caveat - you have flings and hook up with other people. (The husband who has a one-nighter now and then but returns to his wife, always - or vice versa).

Sexual Monogamy: Mating only with ONE partner.

Science has shown across several species will practice social monogamy but ensure survival by males spreading the seed and females sharing their eggs with the most robust specimens they find.

The majority of all species participate in extra-pair mating to ensure the strongest offspring. They are socially monogamous, not sexually monogamous. Out of 5,000 species of mammals studied, only 3-5% form lifelong bonds with one mate, such as:

And even these animals will have a fling with another mate if their current mate cannot perform sexually or produce offspring. If we are talking strictly about what is natural for humans - the lean is on the polygamous side, making monogamy challenging.

Primal instincts will forever be the little devils in our ears, while responsibility will tune that little bugger out. The success of monogamy is acknowledging that it does take work because it does go against our primal instincts.

This is why marriage is seen by several as a societal construct, not a natural one. Professor Pepper Schwartz, Sociology at the University of Washington in Seattle, stated:

"Monogamy is invented for order and investment – but not necessarily because it's 'natural.'"

So, let’s break this down. We know that our views of what and who we want change. We know that primal instincts make us lean towards more than one partner. So, how did we get here again?

All of the Game of Thrones fans out there are aware that marriages were arranged to align kingdoms and ensure bloodlines. Love had little to nothing to do with it. Kings and Queens would have their playthings and concubines, but the responsibility of procreation was taken seriously.

Venice, the City of Love, held Courtesans in high regard, as seen in the movie Dangerous Beauty (if you haven’t seen it, you are missing out). Courtesans were intelligent, politically astute, clever women trained in the arts of pleasing a man. Education and books were illegal to women, but not Courtesans.

Aristocratic men would often be in a Courtesan company without damaging his family name or dishonoring the vows to his wife by being with a lower-class woman. The Catalogue of the Principal and Most Honourable Courtesans of Venice would advertise their skills and specialties-and their prices.

Throughout the world, 80% of human societies were polygamous in one form or another. Scholars believe that the human race lived in promiscuity among several tribes gathered together for strength, procreation, and protection.

The mention of marriage during the Rig Vedic period in India was the first mention of it religiously. Hinduism is the oldest religion globally and defines marriage as a permanent, sacred, religious union to ensure the continuity of race through procreation and cultural heritage.

Although marriage is mentioned and defined, it does not state monogamy. The Vedic literature is stocked full of references to polygamy, especially among kings and nobles.

Pagans, Greeks, Romans, Babylonians, and several other cultures and countries practiced marriage, but the definition of the marriage they practiced had some form of polygamy until about 1,000 years ago. There are theories as to why other than the Roman Catholic and Protestant push to be monogamous such as:

STDs: More humans, more societies, and promiscuity was the perfect petri dish storm for STDs to run rampant. According to a recent study at the University of Waterloo in Canada, demographic and disease data showed the prevalence of STDs historically across regions. The spread of contagious diseases strongly influences the development of social norms. We see the same thing in today’s climate with COVID.

Parenting: Rearing children takes a long time and is financially demanding. It is easier when there is a committed partnership between husband and wife. Fathers are involved and bonded with their children, which tends to keep monogamy appealing. Humans have a greater paternal investment impulse.

Maintain Wealth: Keeping wealth within a family and creating generational wealth is easier if relationships are monogamous. Protecting financial wellness is a massive consideration in marriage.

Monogamy may have been the guiding principle for Western marriages between the 6th and 9th centuries, but the battle continued with the Catholic Church and nobility. Men were given generous latitude for extramarital affairs well into the 19th century, while women risked severe consequences.

Once women could vote, the transformation in marriage started to happen. Marriage equality wasn’t recognized till about 50 years ago. Women were unable to open bank accounts independently, and a man could sue someone for injuring his wife because she couldn’t provide services around the home.

Marriages transformed into flexible divisions of labor and companionship. Parenting partners and sexual attraction. It has gone through more changes over the last 40 years than the previous 5,000.

To avoid the pain of extramarital affairs, some people have taken steps to redefine marriage. Some have put an assortment of cookies in the jar with a proverbial cookbook on how to make them.

According to Jane Lancaster, an evolutionary anthropologist at the University of New Mexico:

"The human species has evolved to make commitments between males and females in regards to raising their offspring, so this is a bond. However, that bond can fit into all kinds of marriage patterns – polygyny, single parenthood, monogamy."

How I read this, marriage is what you and your partner make of it. You set the rules that you can abide by to make your marriage prosper and be the envy of your neighbors. Or, you can make it as chaotic as you like and be coveted by reality tv.

Several kinds of marriages work for people besides traditional. Finding someone who is like-minded and on the same page as you with open communication lines and reasonable expectations leads to a happy married life.

Marriage has been a legally binding contract since ancient times. The terms of that contract can be drawn up any way you both decide (and yes, it should most definitely be in writing to avoid any confusion).

The terms can also be drawn up with a certain amount of time if you want to ‘try it out’ without adding children to the equation to see if it fits. People enter marriage for different reasons besides love or fondness:

Other forms of marriage and permanent relationships that are sexuality-based and observed by 1 in 5 Americans, such as:

Open Marriages: You have one spouse but have consensual sex outside the marriage and have an open line of communication about the external affairs. This type of marriage is for people that want stable marriage, but not a monogamous one.

Polyamory: This literally means ‘many loves.’ You are essentially in love with more than one person at the same time. All partners are aware of who you are in love with and who you have relationships with. Sex is not always a factor. There is a substantial amount of trust and independent bonds between all participating partners.

Swinging: Married couples who exchange sexual partners. Like going to a party and auctioning off your husband or wife for the night to someone else while they do the same for you. Sex is recreational and primarily disconnected from emotion until it isn’t. Some move into polyamorous relationships, some are good with the status quo. These relationships require trust, honesty, and open communication.

In no way did I mention all of the possibilities. They are endless when you draw up a marriage by design. I don’t judge anyone for what they do or participate in; I know what’s for me and not for me. I will say this; love is nothing without intimacy.

Intimacy is defined in many different ways. To me, it is that one person you hold no secrets from, especially the darker things that you aren’t proud of - and they love you. Intimacy is being naked in front of your partner in thought and body, revealing all your broken pieces - and they don’t see anything that needs to be fixed or changed and still loves you.

Intimacy is surrendering to who you are rather than who you are in front of other people with your significant other. Intimacy is reserved for your one person, and no one else gets to taste that most authentic self of you. Intimacy embracing someone inside yourself feeling safe and secure in the trust surrounding you.

Intimacy is the one thing that I don’t have the words for because it's grander than words and expressed in carnal knowledge, raw savagery, and gentleness beyond measure.

When it comes down to it, a marriage license doesn’t matter. What holds you true to you and your partner’s value system - is the deep connection established by building intimacy. At least, that is the way I see it.

See all posts by Musing Around →