by And I am Nightmare 3 months ago in siblings

Even a magician makes mistakes 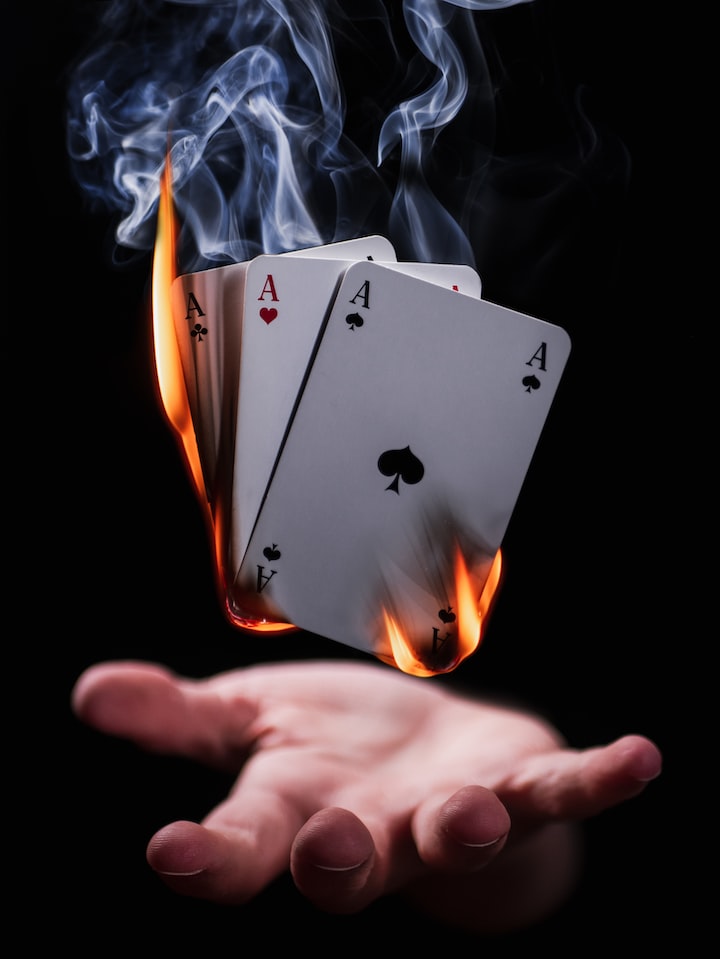 Photo by Julius Drost on Unsplash

I woke up early. I usually slept in till my mom had to pour water on my head, but today I was awake before the sun had started shining. I got dressed and walked into the kitchen where my mom was already up and getting ready for work.

She vaguely motioned towards the fridge and snatched her bag off the counter. “I have a big meeting today, do you mind taking the bus to school?”

“Thanks honey.” She kissed me on the forehead and headed towards the door. “Don’t forget your inhaler at school today, Lynx! Bye!”

After she had left, I checked the fridge. No waffles. Oh well. Maybe I should get my week off to a good start and walk to school.

It was fricking cold out, so I grabbed my jacket from the wall and wore socks with my shoes, which was something I didn’t usually do. If I hurried, I could get to Sen’s house before she took the bus and convince her to walk with me.

Sure enough, she was sitting outside on her front porch, drawing in her sketchbook. Unlike me, Sen was always an early riser, and she loved to draw and sit outside without a jacket on for some weird reason. She had once told me ‘The cold gives me creativity’

Whatever. Cold is cold.

“Hey Sen!” I said, trying to scare her. She didn’t even look up.

“Oh hey Lynx, I was just drawing you. Could you sit there for a minute.”

“Sure.” This might’ve been weird to anyone else, but Sen would draw anything you put in front of her. To be honest, I was pretty sure me and Alex where her only friends. She loved to draw Alex. She said she had a ‘very picturesque face’ whatever that meant.

“Done.” She said after a few minutes.

“Why would you want to see?”

“It’s awesome. Hey, did you ever think about entering your drawings into the talent show?”

“I wouldn’t want to steal your spotlight.” She joked.

“Ha, you could never beat me.”

She looked serious. “I think I want to keep my art as a me thing for a while.”

“Whatever you say. Do you want to walk the rest of the way to school with me?”

“Well, you’re peppy today. Sure, I don’t mind walking. Just let me grab my bag.” She dashed inside, leaving her sketch book on the steps. I was tempted to snatch it up and look through it, because there was a lot of stuff she wouldn’t let me see, but breaking her trust on the first day of school was not a good idea. Besides, she came back out a few minutes later, holding two mochas from their coffee machine and I was automatically glad I had done it. Sen could easily drink two mocha’s without a problem, and if she was mad at me I wasn’t getting mine.

“I put that peppermint flavoring stuff you like. You wanna pick up Alex too?”

I checked her watch because I’d left mine at home. “Sure, we have time.”

Alex’s house was a little out of the way because she lived in this huge fancy neighborhood that took forever to walk around, but luckily for us, Alex was already on her skateboard on the outskirts of the place.

Alex’s parents were stuffy and rich, but Alex was a bit of a rebellious kid. She had a pixie cut with ripped jeans a crop top that she had personally spray painted across the words YOU SUCK!

She had huge hoops in, biggest ones I’d seen her in yet, so I knew her parents and her had gotten in another fight. She was wearing bright blue high tops and had dyed her hair the same color. She had one of those fake dragon tattoos you get in cheap candy plastered to her cheek. It was almost comical when Sen hugged her. The two girls could not have been more different. Sen had straight black hair tied up in a loose pony tail and a simple blue blouse over her jeans.

“Hey!” Alex said, jumping off her skateboard and catching it.

“What’s with the hoops?”

“Ahh, my mom called me Alexandra again. God, I almost punched her.”

Despite myself, I laughed. The last time someone had called her Alexandra, she’d been expelled from her last high school for ripping a chunk of their hair out.

She snorted. “What do guys know, anyway? Why are you up so early?”

She shrugged. “I don’t see why not. The bus is taking forever.”

We arrived at school a little after the first bell, because Alex had convinced us to stop and look at puppies on the way. She said her parents had said they would buy her one when she started to wear ‘more modest attire’, so she was saving her spending money to buy one on her own. We all had the same first class, history, so everything was fine until I stopped breathing.

I have asthma, and sometimes I have a hard time breathing for no reason. I hadn’t had an attack for about three months, so I was completely not expecting it. It started in gym. We were running laps. I was always the one ten feet behind everyone else, but I still ran. We were on our second lap when I suddenly felt a catch in my chest and stopped. I needed a break to catch my breath. I tried to signal the coach and tell him that I needed a break, but I couldn’t get the air to do it. I just kept waiting for my breath to come back, but it wasn’t, and then I realized it wasn’t going to come back. I started coughing so much I could get enough air. I choked and dropped to my knees.

Sen was the first to notice.

“Coach Reno? Coach, Lynx can’t breath!” She had had a little sister who had passed away from a lung disease last year, so she was pretty good at spotting when people were in trouble. Alex was second. She ran over to me and started shaking me, which wasn’t really helping. I could still breath a little bit through my nose, but it wasn’t going to be enough.

What do you think I’m trying to do? I thought. And then I blacked out.

(so this is kind of the first non fiction story I’ve ever written so if you want to give me pointers on spelling mistakes and stuff I don’t mind!)

And I am Nightmare

I am a budding writer, and still only a teen. I love any support that comes my way. I am also a Dark Empath, psychologist in training, and baker.

Read next: An Old-Fashioned Christmas