You Can Teach an Old Cop New Tricks

by Malky McEwan 14 days ago in interview

Having faith in people can pay off 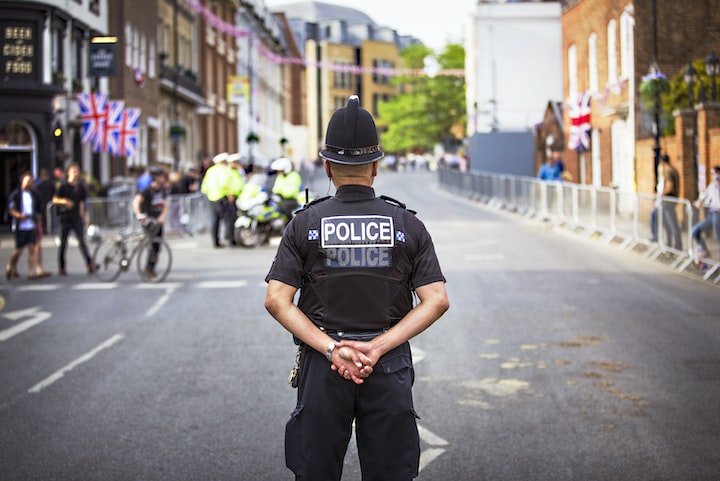 The Best Job in the World

Gary Arbuckle believed he had the best job in the world, and maybe he did.

Gary breezed into work, happy with his lot; always cheery, quick to give an encouraging comment or roll off a rapid-fire quip from his never-ending supply of corny jokes.

Gary's partner was fiercely loyal and never gave him backchat. He did all Gary asked of him and would give up his life to protect him.

Gary loved his job. Gary was a police dog handler.

Gary’s partner, Brutus, was always by his side; he followed him obediently and did his bidding without question. Brutus got to do all his favourite things: sit with his favourite person, go on long walks and chase bad guys.

As an occasional treat, Brutus got a bone. Brutus was particularly fond of a bone when it was part of an arm attached to a man running away.

Brutus politely asking for a bone:

As a dog-handler, Gary attended the most exciting calls, helped catch the bad guys, handed them over to the regular cops who did the paperwork. Gary and Brutus walked off into the sunset.

That was about to change.

Brutus had all the genetic traits of an Alsatian: loyal, obedient, curious, alert, confident, intelligent, watchful, and courageous.

But Brutus was old.

The time came when Brutus had to retire from active service, and that meant Gary’s working life was about to change.

Constable Gary Arbuckle had been a dog handler for twenty-two years. He was six months shy of retiring. Six months before he could collect his pension.

Gary couldn’t get a new dog. Police dogs require intensive training and they are paired with handlers for years. The force needed a younger officer to replace Gary and a pup to replace Brutus.

With over two decades of doing the job he loved, Gary went back to being a cop on the street.

Monday morning at 7 am, Gary walked into my briefing. He gave me a half-hearted smile before settling into a chair at the back of the room. I could see Gary was out of his comfort zone.

He now had to attend calls without his faithful partner and he would have reports to do: crimes, offences, road accidents and sudden deaths. The last time Gary did a report, he’d written it by hand on a paper form with three carbon copies, now everything is done electronically.

His furrowed brow and sagging body exuded foreboding. I could see he didn’t want to be here; he was so far outside his comfort zone it had a different postcode.

Gary wanted to get through this day, the next and then the weeks and months until he could hand in his uniform.

It was my job to make sure he made it.

I paired Gary with a new cop straight from the police college, the fresh-faced Gloria. As a tutor, it was his job to train Gloria. They looked at each other, microexpressions saying the opposite of their polite smile.

Afterwards, Gary came to my office and expressed his reservations. He hadn’t been a street cop for over two decades; he reckoned it would take all his time to bring himself up to speed, he didn’t think he could handle the added responsibility of training a rookie.

I told him I had no choice. All other pairings were working well and as the senior cop on the shift, he needed to take responsibility for Gloria.

As a dog handler, Gary had a positive attitude. I’d never met someone so determined to catch the bad guys, I felt confident he had transferable skills and I told him so. I knew he would take a little time to get the hang of street duties again and he might be slow, but that would be good for Gloria — they’d learn at their own pace.

Three days in, my sergeant expressed his reservations. Gary was never out of his office asking questions. He’d cocked up on a procedural matter and took too long to deal with incidents. “It’s like watching dripping molasses,” he grumbled. I insisted on giving them more time but agreed to review the pairings after a month.

Gary had no confidence. Gloria wasn’t learning. They were so slow it landed the other officers with more than their fair share of the work, which they resented.

The Challenge Is in the Moment

Salvation came in the form of a serial wife-beater.

Rab McCoy’s fourth wife arrived at our local Accident and Emergency sporting a black eye, a bloodied nose and varying shades of black, blue, and yellow bruises over her body. All consistent with physical abuse over a long period.

Rab McCoy was a bully. A brutal man with a short fuse and quick fists. A detestable character who believed he had the right to treat his wife like a punchbag.

The hospital contacted us. Officers attended, but Mrs McCoy feared worse to come — “I fell down the stairs,” she explained.

We should not tolerate domestic abuse. Even without a complaint, police still investigate. We did not want the same thing to happen to Mrs McCoy again. We had to bring Rab McCoy in for questioning.

Nobody liked to deal with Rab McCoy because Rab McCoy was an arrogant, obnoxious tyrant who never admitted to anything. He knew how to keep his mouth shut and, more often as not, he got away with his abuse. He covered his tracks, destroyed evidence, and used fear to deter a complaint.

I tasked my two most promising cops to investigate. They spent an hour interviewing Rab before admitting defeat. Rab wouldn’t tell them his name, far less the time of day.

The CID took an interest; two experienced detectives spent ten minutes with Rab before declaring their interview a waste of time.

At that moment, PC Gary Arbuckle and Gloria wandered by my office, I shouted to them. My initial thought was to ask them to take Rab McCoy home, a straightforward job.

“Rab McCoy is in custody at the moment.”

They didn’t know him — and that gave me an idea.

“I’ve got a job for you. I need you to interview Rab McCoy, we think he has been beating his wife.”

“But I haven’t done an interview for years,” Gary said as he rubbed his strained face.

“Then questioning Rab McCoy will be a good experience for you and Gloria. He’s just an insignificant, small-minded man with a bad temper. I’ve every confidence in you.”

Three hours later, I popped into the custody suite. My sergeant informed me Rab McCoy was still being interviewed.

“They haven’t been in all that time, Gary sat with Gloria for the first two hours working on an interview strategy before taking Rab out for questioning.”

Ten minutes later, Gary and Gloria came out of the interview room. They presented Rab McCoy at the custody suite counter.

“Rab’s admitted to assaulting his wife,” said Gary, “we’ve arrested him and we’re going charge him with the assault.”

My custody sergeant and I shared a look of incredulity. But it was true, Gary and Gloria had achieved what two experienced officers and the CID couldn’t, they’d got Rab McCoy to admit his guilt.

Until the Billboards Fall

At that moment, Gary’s reputation changed. Cops treated him with respect. They didn’t see an old-timer killing time until he could retire — they saw a seasoned officer with remarkable skills. Gary transformed back into his old confident self.

He breezed into work, smiling at one and all, happy with his lot; always cheery, quick to give an encouraging comment or roll off a rapid-fire quip from his never-ending supply of corny jokes. Gary loved his job again.

What I learned from PC Gary Arbuckle

I have often thought about Gary since he retired. His story showed me we can’t trust our pre-conceived ideas about people. When we believe people can’t change, we don’t give them a chance to change. That was true of Gary and Rab McCoy.

We can’t trust our pre-conceived ideas about ourselves. Looking inward for the causes of our problems can puncture our self-esteem and uselessness develops into a self-fulfilling prophecy. It is wise to consider what we tell ourselves about ourselves.

Stanford psychologist Carol Dweck summed it up in her work on the ‘fixed’ or ‘growth’ mindset — whether we see our abilities and personality as set in stone or as malleable. When people with a fixed mindset encounter challenges, they assume they can’t do it. They are limited by their current ability. People with a growth mindset believe their intelligence and skill can develop.

Having faith in people instils faith in themselves. Trust people to do a job and they repay that trust. Give people responsibility and they might just surprise you.

A month before he retired, I had a one-to-one with PC Gary Arbuckle. I thanked him for his service and was genuine in my praise. Gloria was doing just fine. Gary had become an asset to my team; I was sorry to see him go.

“One little thing I’d like to know,” I said as my forehead wrinkled, “How did you get Rab McCoy to admit to assaulting his wife?”

“I hadn’t done an interview in years. In my day, there was no such thing as an interview strategy. I wanted to teach Gloria the correct procedure, so I read up. We sat together and formulated a plan based on the evidence we had. Then I remembered to treat Rab McCoy like I treat everyone else.”

“Well, it was impressive. Rab McCoy never admitted anything in his life before.”

Writing that makes you feel you are standing in a bull ring naked. And when it's over, we'll walk out best friends with the bull.

Receive stories by Malky McEwan in your feed
Malky McEwan
Read next: The Case of the Beauty Queen Killer