by Chloe Madigan 8 months ago in fiction 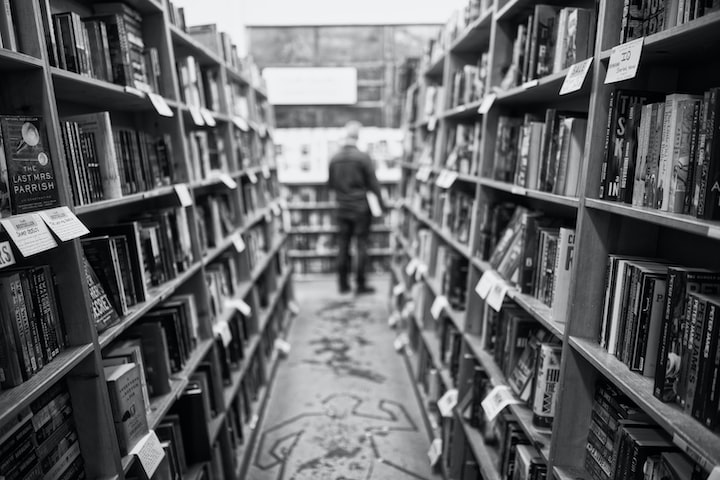 Photo by Kevin Butz on Unsplash

There is no pleasant version of this story and even if I could make it pleasant, I wouldn’t because art isn’t pleasant. If my life has to be a story, the least I can do is turn my life into art.

It was a drizzly winter morning, the kind that brings out the poet in anyone who doesn’t have a degree in finance. I sat on a barstool in front of a large window in a quiet coffee shop. I’ll let you choose the coffee shop if it helps you better picture the scene. It was the kind of coffee shop that feels like home in the way that all independently owned coffee shops do because they are washed in white paint and dark wood with subtle pops of mauve or mustard or sage and they all somehow look the same without actually looking the same. There were at least 3 live plants in my immediate purview. Outside, faceless people bustled past, on their way to meetings or to pick up a child from soccer practice or to serve divorce papers to cheating husbands.

I finished the too-sweet coffee and stuffed my laptop into my work bag. Sighing, I slouched off the stool and heaved the heavy satchel over my shoulder. The caffeine hadn’t quite kicked in and, as I stepped out into the dim morning air, my vision was swimmy and soft. Everything was hued silver; even the bustle of the city seemed to lag a little in the thick, rainy fog.

I made my way up the street towards the nondescript office where I would spend the next 7 hours sat behind a cramped desk proofreading pages for textbooks. It is important that you understand how unimportant my life was and, I guess, still is. It is also important that you understand that I am aware how unimportant my life is. I am still aware, which serves only to heighten my confusion about the whole situation. Every morning, I would wake up, shower, eat a slice of toast or an apple or something else without nearly enough nutritional value, walk halfway to the office, stop for a coffee, read or watch the people walking by, then continue on my way to work. The monotony of the whole process was comforting, in the same way that folding laundry is comforting. If I didn’t stop to think about it, the existential crisis would never set in.

I therefore cannot understand what it was about this bleak, ordinary January morning that made me change my routine.

I hadn’t seen the bookstore before. In fact, it seemed to have somehow pushed its way out through the two shops it sat between, like a flower blooming from a crack in the sidewalk. The building’s façade suggested nothing special or interesting about the shop. A fading sign painted in slate blue simply stated “BOOKS” above an equally shabby door. It was impossible to see inside the windows as books had been piled so high in front of them inside that they were completely blocked out. I had stopped on the sidewalk to stare at the shop with a sort of blithe curiosity. Someone scuttled past, knocking into me, and I realized I was blocking traffic. As if by some supernatural force, I felt myself being pulled to the door, turning the handle, and walking inside.

It was exactly as I had expected – dusty and dimly-lit, towering bookshelves overstuffed with every type of novel imaginable. The shelves were vaguely labeled and gave very little indication of how books were sorted. I walked into the labyrinth of texts, looking around for any sign of human life but finding none. Music drifted softly through the shop and I innately knew from the scratchy sound that it came from a record player. There was an eerie stillness about the place, as if I were the first person to step foot inside in years.

Running my hands along a dust-coated shelf, I saw that some of the books’ spines displayed languages I had never even seen before. The texts were old, seemingly ancient. I pulled a thick, mahogany tome out from its resting place, trying not to inhale the cloud the arose from it. It was a copy of War and Peace in Russian. I realized with a start that the publication date stamped inside – 1869 – was the first year the book had been in print. A first edition was a rarity, and I wondered how this tiny, unimportant shop had managed to come by one.

I replaced the book and continued to walk further into the maze of shelves, following the echoey sound of the music. Every shelf was packed so tightly with books that it would have been impossible to remove some of them even if you had wanted to make a purchase. The smell of dust and disintegrating paper was becoming a bit stifling and, suddenly aware that if I didn’t leave now, I would be late for work, I turned towards the exit.

It was at this moment that I noticed it, set atop a book of Bolivian poetry and a massive collection of French recipes. Unlike every other text in the shop, this one was perched horizontally - as if a lazy customer had pulled it out, decided it was not for them, and had refused to properly reshelve it. Something about it seemed to call to me, begging me to inspect it. I reached out, hesitantly, then grasped the small black book gently.

The book fell open and I realized that it was not really a book but rather like a diary. I flipped to the first page, where, in neat cursive writing, was a single question:

Would you care for an adventure?

When presented with a fantastical mystery, it always seems as though the best idea is to pursue it. Mysteries often lead to treasure, or to true love, or at least to something vaguely dramatic and exciting like a corpse or a singular tooth or a threatening box of razors. It is with the greatest sense of urgency that I entreat you to take a moment and deliberate before choosing to pursue a mystery. Consider if it is the type of adventure that will undoubtedly improve your life. If it is not, I feel an immense amount of responsibility to caution you against it.

I felt a strange, prickling sensation just under the skin on my arms and a slight chill ran down my spine. I smiled nervously, glancing around to see if I was still alone. Feeling a bit silly, I flipped to the next page.

There is a treasure here, and I can show you how to find it.

To your left, there is a staircase. Go down the stairs.

I glanced to my left, startled to realize that there was indeed a staircase descending into the murky underbelly of the bookshop. Looking around one last time, I tentatively walked down the creaky stairs.

I was now in a cavernous basement; the floors were made of concrete but the maze of bookshelves I had seen upstairs was mirrored here. Naked lightbulbs drooped from the ceiling every dozen feet or so. After allowing my eyes to adjust to the harsh lighting, I looked back down at the book, turning to the next page.

Walk to the right – you are looking for a bookshelf with a blue, leatherbound copy of Brave New World. It will be on the middle shelf.

Still feeling silly and now a bit frightened, I turned slowly to my right and made my way towards a bookshelf that was pressed against the far wall. Scanning the shelves, I noticed that one book sat out a bit further than the others. It was bound in navy leather with swooping gold writing on the spine that read Brave New World – Aldous Huxley. I looked back at the journal, flipping the page yet again.

Take it off the shelf.

It was at this point that I began to feel so foolish I almost left. I was allowing a diary giving me cryptic instructions to make me late for work. At best, if there really was a treasure – whatever that might mean – I would have a bizarre story to share with colleagues. At worst, I would have no excuse for being late and risk a blow to my annual review. I promised myself that if there were more instructions in the diary after this, I would leave the bookstore and never come back.

With great caution, I reached out and tugged on the copy of Brave New World.

You have probably already guessed what happened – the entire bookshelf swung forward towards me, revealing a small, hidden room. On the floor of the small room, there was a large safe, and on the safe was a combination lock.

Inside the diary, I saw the numbers:

The lock fell away and the safe door creaked open. My hands shook as I set down the journal and reached forward, opening the safe.

Inside, there were stacks of bills, all held together with rubber bands. My heart leapt into my throat – there was no way this was real. I cautiously took one stack of the bills and ran my thumb across them, counting as they flipped past my fingers. Quickly doing the math in my head, I realized that, in total, I was looking at $20,000.

Before I could decide what to do next, I heard a horrifying noise. The subtle click of a gun being cocked. I froze. It suddenly became abundantly apparent that someone – someone with a gun – was standing right behind me.

“Put your hands behind your head and turn around,” came the gravelly command. I dropped the money and tucked my hands behind my neck, interlacing my fingers. Then I slowly rose back to my feet and turned around to face a tall, haggard old man. There was no way to discern his age – he could have as easily been 60 as he could have been 110. His face was cut with deep, creasing wrinkles and his cold, hard eyes were narrowed and glaring. He had his finger on the trigger of a heavy pistol.

“Who are you? How did you get into my safe? You think you can rob me?” He growled, and I noticed his hand was quivering slightly. I tried to breath, tried not to pass out.

“No, no, sir, of course not. It was the book. The book led me here.” I managed to squeak out. His eyes narrowed even further, his shadowy brows knit together in a way that suggested he wasn’t sure if I was lying or insane.

“What book?” he snapped, his eyes unblinking.

“I can show you – it’s – it’s in front of the safe,” I said in a near whisper, “please, I promise I’m not going to try anything.” Sweat dripped from my temples and I felt my eyes welling with tears. Entire decades seemed to pass as he stared me down, before he finally motioned with the pistol for me to get the book. Keeping one hand on the back of my head, I carefully knelt down and reached back for the diary. I felt around blindly on the cold floor until my hand brushed against the smooth leather. Continuing to kneel, I slid the book across the floor. It came to a stop with a solid thunk as it hit the man’s boot. He bent forward, the gun still pointed at my head. Picking it up, he leafed through the pages, and then looked at me. He turned the open diary to face me.

I realized with horror that the pages were blank.

“How did an empty book get you into my safe?” he asked, and the world went dark.