by Anna Killick about a year ago in fiction
Report Story 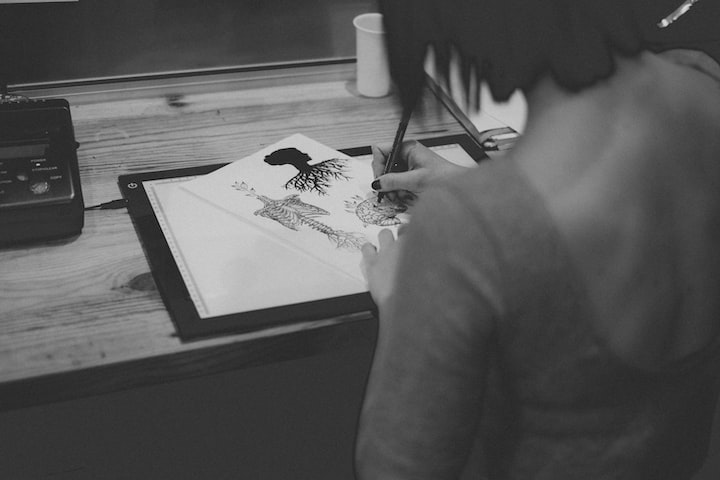 Yes, I had a book. Yes, it was small and black. Yes, it was Moleskine. I felt a little bit fancy using my ink pen to make shapes and draw caricatures of people on the smooth creamy paper inside. True story. Never in a million years did I think I would be looking at one of my copied creations staring back at me from the wall of the Louvre.

I mean a local art gallery, sure. Some out-of-the-way, beachside town where tourists traipsed sand through the concrete cube containing walls of brightly coloured changing tents or garish caravans. I could easily be featured there.

It was definitely mine. I had drawn it in on a holiday in New Zealand - Aotearoa - captured in a black and white circle. Trees, tents, the moon, sheep - it was one of my best. But the signature beneath the picture I was looking at read P. Smith. I took a step closer and examined every little feature, praying I might find some discrepancy. But many of the little details carried my telltale initials, hidden in the lines and swirls of the drawing. The exhibition was a modern one, one that had taken my interest - 'International Flora and Fauna' or 'La Flore at La Faune Internationale'.

I sank onto the nearest bench and felt sweat under my armpits and wiped away the moisture above my lip-line. My thoughts raced, confused and flurried. How did my sketch from my little notebook end up blown up to A3 and framed in beautiful, simple white on the wall of arguably the world's most famous art museum? I slipped off my traveller's backpack and, caring less and less how I looked, began to bundle out clothes, toiletries and dirty washing to get to my Moleskine at the very bottom. How long since I had sketched in it? Maybe three months? It was getting full. Not since Spain. At last my hands felt the cool touch of my book. Relief flooded me. I rapidly opened the pages until I fell on the one I was searching for. I had expected a ripped-out page but instead an exact replica stared back at me. Exact.

I needed water - now. I took a long swig from my drink bottle and shakily repacked my belongings before approaching the nearest helpdesk. A lady with a neat black bun and a pasted-on smile seemed to sense that my French was not up to scratch.

'Can I help you, Mademoiselle?'

Where did I start?

'There's a picture here. It's mine. I drew it in New Zealand a year ago.'

'Congratulations, that is fantastic.' she smiled.

'No, no. It's one that someone copied from me. A forgery. Do you understand?'

Her smile dimmed a little. 'Yes, I have very good English, thank you - I understand. You are saying that someone copied one of your pictures? I would have to speak to someone higher up but even if what you are saying is true, how do we know that you did not copy someone else's picture?'.

Like a cliche, I put my head in my hands.

I turned and rushed to an exit, feeling like I could hardly breathe. I knew where I had to go. I ran until I reached the nearest dingy and overpriced internet cafe and googled the exhibition. All the pictures were by a Peter Smith from the USA. Apparently, they were his own black and white renderings of nature from all over the world. The odd thing is that my art stood out. His other pictures were more abstract and shaded. He had stolen from me. Somehow. I went to his gallery website.

P. Smith. Peter. Peter...No, it couldn't be? Pete? The American traveller I'd met in Barcelona three months ago?

Damn! I moused over a section called Meet the Artist and as soon as she clicked on it, his beaming face shone out from the screen. The dodgy rotter!

He had been nice. He'd taken me to dinner and we'd been inseparable for a week. We both knew we'd never see each other again but that made it all the more romantic. He'd taken an interest in my love of art and said that he shared it also. I think I had flipped through the notebook briefly, showing him split-second images of my work, too embarrassed to show him more. But all it would have taken is for him to sneak out with my notebook while I slept and photocopy the page before returning it, and then later on, forging it.

Was he here in France? Or was he back in America? Usually I am calm. Forgiving, even. Fair. But rage flooded my veins like a torrent of lava. No more Ms. Nice Guy. I was going to threaten him.

It was lovely to see MY painting at the Louvre today, you sneaky sod. All I want to say is I know where your gallery is so watch your back. I'm coming to the States soon. You wouldn't want all that nice art to go up in smoke now would you?'.

Unless you want something very unfortunate to happen, I want $5,000 in unmarked bills delivered to the address below and a public statement admitting to what you did.

As evil as I felt, no one was going to take my gift and flog it off as their own. Drawing and travelling were all I had and this time, I would stand up for myself.

I returned to my bunk bed at the hostel and fell into a fitful sleep. Images of fire and Pete's beaming face coming in and out of my dreams. The next day, I ate little and slept through until the next morning, too depressed to move.

The next morning, I was not just sad, but furious. I truly felt I would follow through on my threat. I decided to return to the Louvre and speak to someone as high up as I could. I would take a translator if necessary. I would make sure that they understood this miscarriage of justice. I also had prepared a statement for social media and different news outlets outlining what he had done. I hated him.

As I went to rush out of the hostel, the manager in the foyer called out.

'Mademoiselle Reina? There is a parcel for you?'.

I almost didn't stop but I was waiting on a care package from a friend. He reached down and passed across to me something heavy and wrapped.

Taking it to the nearby coffee table, I ripped it open. Bubble wrap and cardboard assailed me. But finally, there was my framed print with the signature 'P. Smith' removed. I opened an envelope attached to the painting and out fluttered a cheque for $20,000 made out to my name from one Mr Peter Arnold Smith and a letter from the Louvre asking me if I would consider loaning a bigger print of my original, under my name.

Confused and amazed, I noticed another envelope inside. It was a note from Peter.

I can't apologise enough for the fool I have made of myself. I just need you to know that it was not intentional. At some point, I must have seen your picture but I can't remember having done so. It was something imprinted on my mind down to the last detail. You may not believe this but I have a photographic memory. But I have never knowingly used it to copy art.

I hope the painting and the money I have dropped off makes up for it in some small way. And you really do have an 'in' at the Louvre now!

My mind went immediately to my email. I had threatened his livelihood, I had talked of burning down his gallery. All for an innocent mistake.

I banked the cheque and, pleasingly, it cleared. I had never had an amount like that gifted to me in my life. I wrote him a quick apology back and thanked him for the money and the print (which of course I immediately burned).

Walking back to the Louvre at their invitation was surreal. I would see Peter's real work and discuss my involvement with them. But when I reached his exhibition space, there wasn't a picture in sight. Knowing that it didn't end for another week, I approached the same woman at the same helpdesk.

'You were right! I talked to my manager and she began to look through Peter's art. At first it was one or two pieces, but we soon came to realise that every single piece had been copied. He is a forger. And Mademoiselle, one of our curators wants to speak with you about your own exhibition. Could you come with me?'.

Well, I'll be darned. Little Miss Black Book was right all along.

So did this make Peter the villain or the hero?

If this Moleskine could make me rich and famous, a name on the map of the art world, then I really didn't care.

More stories from Anna Killick and writers in Criminal and other communities.