a peaceful winter retreat is ruined by an unexpected visitor 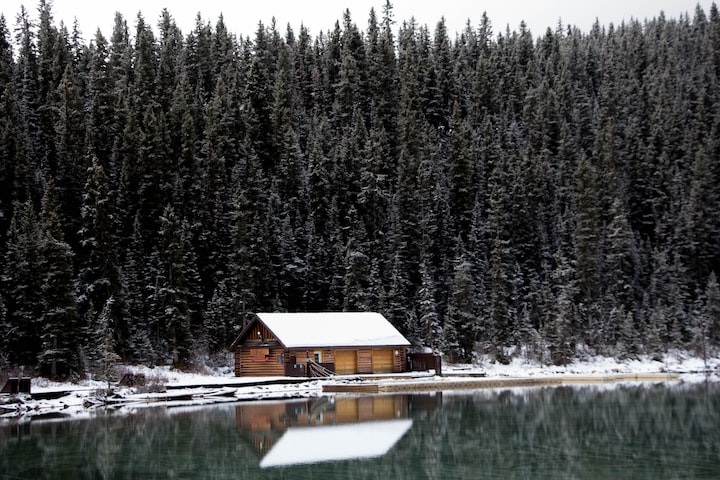 It was cold in the forest that winter, colder than anyone would have predicted. The pond had already frozen, and the air threatened to do the same to your lungs, if given half a chance. The winter’s silence here made it feel like there had never been a summer. There was freedom in this isolation.

During the dawns when the freezing fog would roll in off the ice, it somehow took longer to clear the cobwebs of night from her consciousness. Sleep had always evaded her in the city and now to rise slowly always reminded her of the stilted reality of relentless insomnia, the incessantly repetitive action of dragging her exhausted carcass through the turgid cement of the day.

The cabin was not luxurious, but neither was it meagre. It had long since had its heyday, but everyone agreed it still retained a certain charm. She had come to spend the winter alone. She had felt the city’s heart had grown colder, even, than the remoteness of these woods. There had been so many endings, it seemed the right time to walk away for a while, to reset. Her soul could take no more of the constant blinking of lights and the never-ending movement of bodies, streets, underground trains, frustrations and expectations. She craved stillness, calm, simply to take that deeper breath, skip a season of demands. Maybe the world would be a softer place if she re-joined it in the springtime; perhaps she would feel reborn as the first buds opened. Maybe the world would end while she locked herself away.

She had not been sure that spring would even come for her, and now it was beginning to seem even less likely. Her cocoon had never guaranteed her emergence as a butterfly, and in this moment, she could feel her winter safety being torn apart. His visit was as unexpected as the parcel that came with him. She had not asked for guests, nor for their luggage, and certainly not for either to arrive together on that same foggy morning. These two suspicious surprises in tandem did nothing to welcome even the fuzzy vagueness of the sun into her life in that moment.

Would she have run if she had expected him that morning? Could she run further than she had already run? Where was there even left to go? As she poured the coffee, she mulled the question, glancing at its brown paper wrapping. What a strange thing to do, she thought, to bring, unannounced, a package unopened all the way to someone else’s house.

She gazed at the table and wished he had never come here. Two chipped cups, instead of only the one she thought she would use this morning. It was not how she had planned it. Her winter was meant to be untouched, an invisible, season. Uninvited, he had arrived, bringing with him that damned parcel, trying to camouflage itself with its irritating pretence of an innocuous brown paper disguise. She felt a familiar longing to be able to shroud herself in her own brown paper, so that nobody could see her contents. She wished he could not look into her unguarded soul right now, but she knew, he surely would have not made the journey without already knowing what lurked beneath her imagined brown paper.

He was tall, but she had never thought of him as such. He liked to think of himself as imposing and commanding, but in truth, she had always found his presence to be unassuming, a background figure, a bit part. Today, he seemed to move with more purpose, maybe because he had put so much effort into getting to this point. He had been pleasant, but there was no warmth in his demeanour. He did not want to make her feel comfortable; there was no space to breathe in his presence. Even his steady gaze felt nothing but relentless as she felt his eyes unable to be distracted from her own. They were kind eyes, aged in a well-smiled way, but his kindness was kept for someone else these days.

He could not look away from her face, even as he began to open the parcel. Her hair fell in a way that sometimes now covered one eye; it had grown since she left the city, or perhaps he had simply forgotten the way she wore it. She had abandoned all the makeup out here in the wilderness. He was not sure if he would have recognised her, if he had seen her in a café, or at a station, or if their paths had crossed by chance; yet nothing had changed the way he felt about her. He had needed to come here, to follow her; he knew the pursuit would not have ended until he had run out of either steps, or breath.

The package was weighty for its size, but not unwieldy, a harsh rectangular shape, a modern even-sided juxtaposition that pierced the cabin’s rustic environment. The brown paper screamed against the plastic as he tore the tape sealing it. He had not brought softness with him. He had not brought conversation. He had brought her past.

The screams of sirens and strobe flashes of city lights burst her eardrums as her chest tightened with a thousand breaths at once. Overloaded with adrenaline that seemed to shoot straight into her irises, her body shook once with forcible recognition and the staggering intensity of a tidal wave of nausea. She held inside the tornado of chemical fury coursing through her blood, desperate not to betray herself in this way. The world shrank to that tiny room in a single moment. Two almost-strangers looking into each other’s eyes, minds racing, and bodies frozen, trying to anticipate the next movement of the other. It had always been a game of chess between them, from the very beginning. Perhaps believing there might be a winner was their mutual error.

He pulled away the final paper from around the contents, and her quickened heartbeat began to feel less anxious, and her veins began filling with exhilaration. She could feel every nerve ending prickle with excitement as he revealed a police file in his hands. He was moving with a deliberate slowness that was frustratingly out of step with her awakened desire. He had become interesting again, in the way he used to amuse her, before he became an irritation intent on destroying her solitude. Impatience made her want to tear the file from his hands, her senses alive and ready: she needed this again. She would not give him the satisfaction, though. He always did this, when he wanted to feel in control: move slowly, speak deliberately, even with a slightly different inflection to his vowels. Even when he excited her, he still managed to be an endless source of annoying predictableness.

He passed the file over the table.

‘Why was it wrapped?’ she asked, with a nonchalance that frustrated him.

‘It’s a copy. Not the original. Once I found you, I had it made, picked it up and came straight here.’ He responded in his serious drone.

‘I don’t exist to entertain you,’ he replied.

Behind her muted expression, she laughed to herself. Of course you do, she thought, I just wish you’d try harder.

She opened the file and it felt like the cabin had never existed. Catapulted back to that previous life by this ream of forms and photographs, seething with energy, darkness, purpose, and the perpetual rollercoaster of truths and lies. Even the colour of the papers, the smell of the photocopies, the confusion and uncertainty of close-up photography; all triggered a thousand memories of a past she had believed to be behind her. Still, there was nothing here she had not expected.

‘Why do you think I’m here?’ his voice cracked with annoyance, and she was delighted to see how quickly she had managed to get under his skin, ‘Why do you think I came with this file? Why the fuck would I come all this way, do all that work to find you?’

‘Because you miss me?’ she knew adding a wink was over the top. She did it anyway.

‘I miss you about as much as I miss my ex-wife, but I also need you a hell of a lot more right now.’ As he spoke, she realised there was a feeble urgency in his voice. ‘The murders stopped, and I can’t make any progress without your input. All along, you just made the difference, Anna. This is our case. You can’t just quit and leave it all behind when there’s still so much work to do.’

‘Fuck you, I’m not your slave.’ Her tone was steady and calm, totally unshaken by his demands. ‘You don’t get to choose what I do. I quit, I left. We’ve already been through this. You’re the one chasing shadows like a madman, but I don’t have to be a part of it.’

‘If we’re throwing around accusations of madness…’ He let his words hang like a lit match, waiting to ignite an angry fire. Instead, it burnt down, and fizzled out. She pretended not to notice his goading, and returned her attention to leafing through the file, while he sighed with exasperation and drained his coffee cup.

‘There’s nothing new in here. This is the same old shit I left behind.’ Her interest in him, and in the file, had waned. There was no game here, after all.

‘I told you, I made a copy. The copy is for you. You can keep it, you might think of something if you have it… call me, keep it alive. It’s not too late to come back. You are so good at what you do.’ His tone had moved into desperation and Anna realised she was not playing chess at all, at least, not with him.

He was nothing but an idiotic messenger boy from her past, here only to remind her that nothing can ever really be forgotten. Her mind began to move away from the moment, into her own thoughts, and his words all became background noise: pathetic and purposeless. He was in the room, but she no longer felt his presence niggling at her like a persistent fly. She had always known she would always win against him, but she was disappointed to find that he had simply given up playing at all. When he had arrived that morning, she was so sure he had come to arrest her. He had sucked all of the challenge, the chase, and the joy, out of her whole winter. There is no victory in hunting a sleeping deer. We all make mistakes, she rationalised, but how tiresome to have this to deal with all over again.

Refocusing her attention into the small cabin room, she looked at the empty extra cup on the table she didn’t think she would have to use today. He made a series of very boring choking noises, and she rolled her eyes in impatience at the length of time it was taking him to die.

//thank you for reading this dark tale! If you enjoyed it, please give it a heart, share it on social media, or leave a little tip 😊 //

\\\non-fiction on the wellbeing tip\\\

CW/TW for my fiction work: often contains violence and may contain references to trauma/dv/assault