by Lewis O'Donnell 11 months ago in mafia 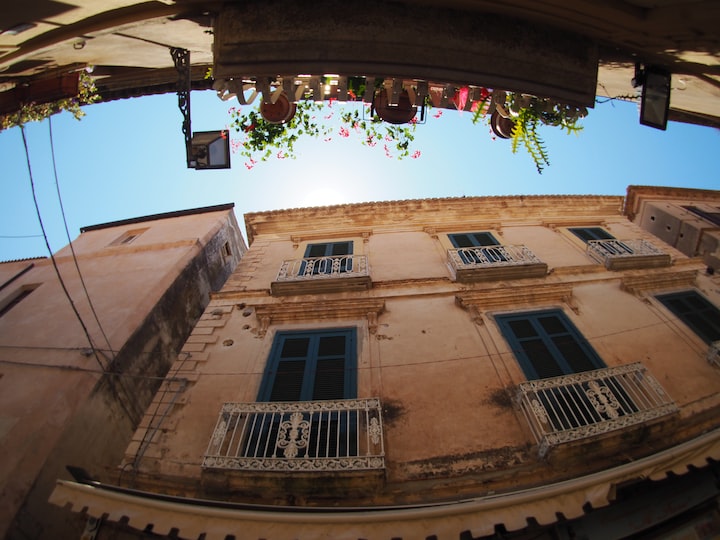 If you had been to our island you would understand. Palermo is not a city. Sicily is not a region. We are the well-protected bay. We are the afterlife, formed out of nothing by Greek Gods, mathematized by Roman legions, arabesqued by Muslims. Our women are mafiusa, beautiful and attractive. Their dark-haired features are lusted after by all. Then mafiusa took on a whole new meaning when we reached New York. We were mafia in the U.S.A. Mussolini tried to stamp us out in Italia, but we were reborn in the States, smuggling heroin into our pizza parlors. We went from protecting private Sicilian ranchers to drug trafficking. All the while remaining kings. All the while infecting industry after industry. But when I returned to Palmero and first met the American on our soil, I knew there was going to be a problem.

It was evening. All the golden lights were aglow underneath all the arches. Every street was cobblestone and quiet. The Mediterranean crashed against the peninsular rocks outlining the city. Every dome, every pizzeria, every osteria, every chiesa, every ristorante was shattered into silence. Except one. And this one had a piano player, un pianista. A piano player who knew the keys to eternal life. And this was where I met the American.

He was American, from his red, white, and blue New Balances, dancing up to his taut short-sleeved button up, and landing promptly on his brown locks. His eyes radiated confidence and my teeth clenched. When he stood underneath that carved stone archway as if he belonged there, flagging down the host like a sputtering taxi, I wasn’t just irate. I wanted blood. I wanted him. I watched him from my booth in the corner, eying his every move.

“It should be under Falcone,” the American said. “First name, Anthony?”

“Ah. You are English!” said the host knowingly, as if this somehow mattered.

He led the American over to the balcony seating. It was a tourist’s destiny. A moonlit balcony overlooking palm tree after palm tree, a quiet Jerusalem of stone and adobe buildings, and in the far distance, the Purkinje effect darkening the expansive sea. The moon was nearly as massive and inviting as the breasts protruding from a cluster of Italian women. They were giggling at the sight of the newcomer, alone. The women were seated at a nearby table wearing pearls of white, holding glasses of wine darker than the jealous blood I was about to spill.

Falcone. The very name threatened the Cosa Nostra, the mafiosi. Not to mention, he was American. And no one was let into il ristorante, this restaurant, without being on some sort of business.

While the host brought out the mineral water and started his drink order, I glanced at the empty podium at the front of the restaurant. I stood slowly, dropping a napkin on the checkered table beside my unfinished Bolognese plate. No one saw as I left the corner booth, walked thirteen paces to the podium, and flipped open the innocuous black notebook. The pianist hit a flurry of notes, a crescendo, as I scanned the parchment with my finger. There, below my name, Giovanni Monterroso, was Anthony Falcone. Keep playing! I thought frantically. For if the pianist stopped there would be a travesty of unwanted attention. I pulled out my smartphone and snapped a quick photo of the American’s print name, his signature, and a string of numbers beside it. 60221.

I returned to the corner booth, sat down, and pulled out my black radio transceiver. “Vedi l'americano?” Do you see the American? I muttered angrily into the mouthpiece. Six seconds passed.

“By the balcony?” came the reply. “Negative Gio, here on Don Franchetti’s orders.”

“He’s Falcone, I have proof” I responded.

“We know he’s Falcone, Gio” came the static. “That’s the point. He’s meeting with Don Franchetti. Don’t make a mountain out of a molehill.”

“Above your pay grade. Just keep watch on their meeting and for any unwanted guests.”

I spotted a suited waiter strolling by the corner booth, headed towards the balcony. I yanked on his coattails and he nearly tripped over his mustache. He turned back and scowled.

“Hey. Manhattan. Now.” I growled. He furrowed his eyebrows even more, but scurried back to the bar.

Then, as if in a dream, I saw Don Franchetti. I saw the sparkle and flash, and heard the roar of his white Maserati. A moment later, he entered through the archway, clutching a briefcase. He was dressed in a pair of plaid trousers and a black shirt, sporting a golden wristwatch. His dark skin blended well with the dim-lighting. He paid no attention to me as he passed and why should he? I had never seen the man, except on the posters around town. Yet I felt as though I knew him, just as I already knew what was in the briefcase. He emerged on the moon-lit balcony and the American stood up and greeted him hesitantly, but warmly. Handshakes and words were exchanged, then the pair sat down.

I cocked my head, unable to make out their words from the corner booth. Every now and then, a salty breeze from the balcony would bring some dialogue. But it was interspersed with talk from the drunken brunettes, now eyeing both Franchetti and Falcone.

“Gli parlerei, se non per mio marito.” I would speak to him, if not for my husband.

“Se non chiedi loro di ballare, lo farò io.” If you won’t ask him to dance, then I will.

“Here is your Manhattan, sir” said the waiter with a sneer as he passed the corner booth. I avoided eye contact and brushed him aside, still trying to hear. But the women were blocking the view now, dancing in time to the arpeggiated chords. The pianist was starting to sing. There were four women in total, gathered beside two chiseled pillars on the balcony. I knew I had to get closer. I balanced the garnished Manhattan and made my way over to the women. One of them wasn’t dancing, an innocent, doe-eyed girl. She didn't look much older than nineteen. She had straightened hair, and looked more like the models of Milan than the curly, coastal-haired women of Sicily. But for all intents and purposes, she would do. I took one final sip of the Manhattan, then approached her, softened.

“Excuse me, miss. I saw your friends dancing, but not you.” She smiled coyly.

“I do not dance, sir” she said. Her elegance was pointed, eyebrows arched.

“Well, I can hardly blame you, not wanting to dance with them” I said, raising my head towards her friends. They were dancing provocatively despite the classical genre. Two of them giggled and whispered at us, while one tried to procure Falcone and Franchetti for a dance.

“Your friends seemed to have noticed us. Shall I leave you alone for the night or may I show you what real dancing is like?”

The young girl hesitated, the corners of her cheeks tinged with rose blossoms. Falcone and Franchetti had declined the offer of the ambitious woman. With a flirtatious look, she called over to us. “Dance with him Marguerite! He is a gentleman, unlike these businessmen.” And with that, the young girl, Marguerite, extended her hand towards mine. I set the crystalised Manhattan on the balcony edge and took her palm in mine. We embraced and I rested my hand gently on her bare upper back. It felt cruel to use her in this way. She was beautiful. But as I led her towards an empty part of the balcony, adjacent to Falcone and Franchetti, I knew I made the right decision. I could hear almost every word now.

“So if I complete this job, the 20,000 will be wired to my account in Brooklyn?” said the American. I spun Marguerite in a twist, then into a forward back-step, waltzing in tandem. Her sleek bangs flashed across her face and she smiled.

“No. What do you think is in the case? I’ve already told you the combination-”

“Catch?” repeated Franchetti. “No catch. They told me you were the best. It is better to use you here than my own men in Sicily. If you get caught, it is international problem, not mob problem.”

“So it makes the Italian and U.S. government look bad, but not your enterprise.”

I had heard all I needed. I started to perspire and felt a tension in my chest. I knew what needed to happen. Marguerite felt it too. She stiffened from the clammy hand on her back and started to pull away. The song was ending.

“Pardon sir, but I should really be getting back to my friends.”

“Of course, milady,” I said. But then I pulled her close to my chest, enough to whisper in her ear.“Marguerite,” I said seriously. “You and your friends need to get out of here. Now. Something bad is about to happen.” She pulled away and looked at me. Her brown eyes widened and her skin paled by the moon. I nodded. She returned to her friends and they hurriedly left the restaurant without paying.

I returned to the balcony edge, picked up the Manhattan with a sticky hand, and downed the rest in a single swig. Then I charged Falcone’s table.

Still holding the glass, I swung and smashed it against the side of Falcone’s head. The restaurant erupted. Palermo erupted like Mt. Vesuvius. Screams and bitter cries of fear were throbbing in my ears. I smashed Falcone again with the now splintered glass. This time blood squirted out his ears and he crumpled. My radio transceiver was yelling at me now and through the static I heard: “What the fuck are you doing! Stand down Giovanni!”

Don Franchetti tried to pull me off Falcone, but I shoved my shoulder into his lithe frame, sending him sprawling to the marble floor, knocking over his chair.

“Who are you!?” he cried from the ground, tears in his eyes. I hoisted Falcone’s body over my shoulder and saw the fear in Franchetti’s eyes.

“La Talpa,'' I said simply. The Mole. Then I tossed Falconi over the side of the balcony. I heard a rustling of branches as he flew through the Cypress trees that lined the edge of the building. Then a snap, as he tumbled down the hill. Finally, I picked up the metallic case, punched in the combination, and hurled it down after Falconi, into the city below. And somewhere, in the quiet streets of Palermo, the case burst open. And twenty thousand U.S. dollars spilled out for a random passerby. And then, I ran.