by ben woestenburg 10 months ago in fiction

Part 1 The Past is always Present 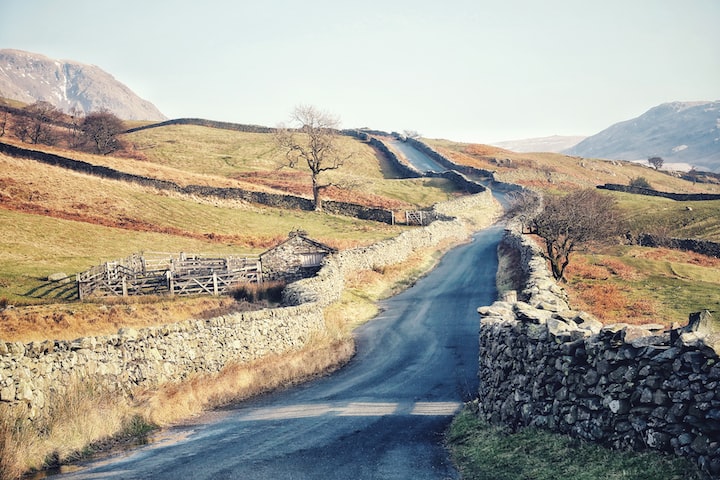 Photo by George Hiles on Unsplash

The drive from Chumley to Okehampton was usually little more than half an hour; with the mood they were in after having met DCI Biles, it took Sonia an extra fifteen minutes to make the drive. The countryside was mostly farmland, the sky a light turquoise colour with large cumulus clouds moving in from the East. Farms, with hedgerows marking their boundaries, and trees of every colour swaying in a gentle breeze, appeared, and just as quickly, disappeared from view. A few of the small villages set off from the roadside were approached by narrow tracks of dirt worn deep by centuries of use. It was the type of drive Sonia usually enjoyed. She could see cows grazing lazily in the wide, open pastures, and sheep dotting the hillsides. Swans swam lazily in open ponds created by the recently flooded rivers and streams, and she wondered how long it would be until the water finally receded.

It brought to mind the body they’d found, and where it might have come from.

“We should look into the local Communists here,” she said, her soft voice breaking the silence between them.

“What’s that?” Nigel asked, his own thoughts miles away she realized.

“The Communists? They have a—I don’t even know what you’d call it—a branch office?” she smiled.

“The Communist Party has a branch in Okehampton?”

He smiled at the idea and she found herself laughing as well, the idea of such a small village being a hotbed of Communists and spies sounded ridiculous now that she thought of it.

“All the same, it is what it is,” she laughed. “I’m almost certain I mentioned it before. They’ve been recruiting all through the countryside. We were keeping a close eye on them. Weren’t you?”

“It’s not like that in Chumley. Not at all,” he said, after a brief pause. He looked at her and shrugged. “It is what it is.”

“A lot of these farms out here have workers who make their way across the country, looking for work. Veterans, and such. They’re more than willing to help spread the word.”

“There can’t be many workers at this time of the year?”

“What about Biles?” he said, changing the subject.

“He might not appreciate us poking our noses into his business. He all but told us we’re not qualified to run an investigation. Hell, we’ll be lucky if they let us look for the thief once we get into Okehampton.”

“Then why didn’t you tell Biles we think the body’s a Russian? Maybe even a spy? You would’ve saved him at least a week’s work.”

“Because I’d hoped we’d look into it first,” she replied.

“You see, that’s just what I told myself we wouldn’t do,” he said, pointing a finger at her and shaking his head.

They were approaching Belstone Corner, a conflux of several dirt lanes merging into one. The trees were larger here, heavier, the leaves on the trees a palette of colours with the branches extending out over the road and forming a canopy. The road rose and fell with the countryside; the farms were larger, with several houses as well as larger outer buildings off to the side. The land was a patchwork quilt of subtle greens and faded yellows—almost ochre—some separated by ditches and small streams that had flooded and formed small ponds that caught the afternoon light. There were endless mazes of hedgerow.

“Do we tell them the truth when we get into Okehampton?” he asked.

“I think it depends on whether they let us in on the investigation. Maybe they’ve all ready decided we’re not qualified to lead any investigation. Neither one of us has passed the tests for Detective Inspector’s rank.”

“Of course, there is that,” she admitted.

“All right, maybe I don’t have a plan,” she confessed. “I thought we’d have a head start on everything if we reported it tomorrow. Bile’ll have had either Charlie, or Rose, send a message to Exeter by then.”

“But will they send it to Okehampton?”

“I’ll tell them you got sick.”

“Look. Nothing’s changed, here,” she told him, turning and looking him in the eye. “I don’t live in the middle of the village. I’m in a tiny boarding house with a woman who wouldn’t mind a little more adventure in her life.”

“And what’s that supposed to mean?”

“Twenty years ago she was in the Boer War.”

“The Boer War? And what, pray tell, was she doing there?”

“She’s Afrikaans. She was a landowner, and like so many others, she lost everything.”

“How many other people live there?”

“That’s the good part. There’s an empty room. The last occupant of the room…left.”

“Again? What does that mean? I mean, the way you said it? It sounded like…you had to think about it?”

“That was his name. Grant McTavish.”

“And how did your good friend, Mr. McTavish, die Sonia?”

“He choked on the sandwich he was eating.”

“He choked on a sandwich?”

“Im sure it does,” he said, turning to look at the passing scenery. There was a copse of beech trees in the distance, their long undulating forms as graceful as ballerinas in the wind, the leaves all but gone.

“So how long do you assume it will take for me to…you know?”

“That seems like a rather dramatic announcement, don’t you think?”

“Does it? How many bowls do you smoke a day?”

“Please, Nigel. I saw you smoke at least three full bowls with me alone. Did you puff a bowl when you woke up? I imagine you did. Your leg and hip probably hurt because you just can’t get comfortable in your bed at night. Am I right? Do you ever wake up in the middle of the night, thinking it hurts too much? I’ll bet you have laudanum on hand as well? Do you take a tablespoon, thinking it will help you sleep? They used to give that to the Vets addicted to morphine—now they give them heroin. It’s all the same; it’s all made with opium.”

“And you learned all this being a nurse?”

“And you’re saying I’m addicted? Physically addicted? My body craves it, and I feed it. I might think it’s because of my injuries, but in reality, it’s my addiction to opium I’m feeding?”

“I’ve seen it before. I used to administer morphine to the soldiers myself, for Christ’s sake, to help them with the pain. But we were at the Front lines, and there was little else we could do for them. Most of them were dying, anyway. If they survived the night, we’d give them more morphine and ship them off to a hospital behind the lines, where they’d give it to them there, as well. We gave everyone morphine, and then turned them lose when we said they’d recovered from their wounds. They were already addicted by then, and we just kept giving them more. We created the problem, and then refused to confront it. And because there were so many soldiers addicted to it—those men with missing limbs now had missing lives—so the government thought it would be a good idea to ban it, and make it illegal.”

“No, not yet. But they’re setting up a committee. My father was telling me about it. A friend of his is going to head it.”

“It’s the English way, isn’t it? In fact, yours isn’t the only doctor to prescribe opium as a pain killer. It’s the British System. That’s what they call it.”

“And so you take me to your boarding house with your crazy, Afrikaans landlady, put me in the room where Grant choked on his sandwich, and wait for me to fight an addiction I’m not even aware I have?”

“Sounds right,” she said, looking at him and nodding.

“And in the meantime, we try to solve a murder, by not telling anyone we’re working on it?”

“I think you’ve got the gist of it,” she laughed.

“How long before I start to feel the effects of my addiction?”

“By tomorrow you’ll be wanting something to take the edge off.”

“After that we take it one day at a time.”

A blue-collar writer, I write stories to entertain myself. I have varied interests, and have a variety of stories. From dragons and dragonslayers, to saints, sinners and everything in between. But for now, I'm trying to build an audience...

More stories from ben woestenburg and writers in Criminal and other communities.